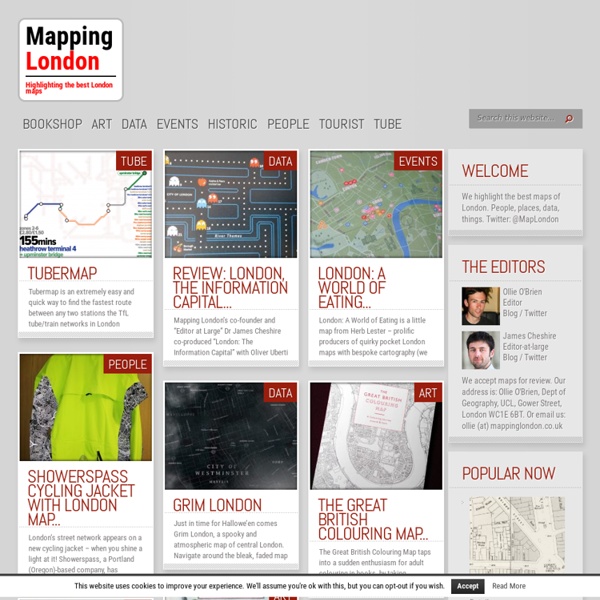 Dr Ed Manley (@EdThink), a research associate on the Mechanicity project here at the Centre for Advanced Spatial Analysis, created this dramatic, colourful graphic (excerpt above) of popular routes used by one of the major private hire cab companies in London, using Gephi. The work was created using data from over 1.5 million journeys. Distinct zones, within which many journeys start and finish, form out of the network, and have been coloured to distinguish them from adjacent zones. Some zones are based within a particular small neighbourhood, within which short cab journeys are popular, such as Soho and Knightsbridge. Others stretch along...

Cranes dominate London skyline as office construction rises by 18% Construction work in central London is at its highest level since the financial crisis as the technology industry drives an economic boom in the city. New office buildings in the centre of the capital are going up at a rate 18% higher than six months ago, according to a report by Deloitte Real Estate. There are now 77 office schemes under construction covering 11.1m sq ft the most since 2008. A collection of new City skyscrapers are among those keeping construction companies busy. A Cartography of the Anthropocene The Anthropocene: A primer. The Anthropocene. We’re already there. This is our time, our creation, our challenge. Officially, this epoch does not exist. Yet.

Le carroyage avec QGIS et le plugin QMarxan, c'est facile! Article en français "Gridding for the dummies" ;) with Quantum GIS and QMarxan: In this article, I explain the purpose of gridding, why it is such an efficient way to analyse data within a large community of actors. Actually, gridding can be considered as a transcription of the raster format to the vector one where one tile <=> one cell. I Wish This Was 2010New Orleans, LA Interactive public art project that invites residents to share their hopes for vacant buildings. Chang placed boxes of free stickers in businesses around the city and posted thousands of stickers on vacant buildings across New Orleans, so anyone walking by could fill one out. The stickers are vinyl and can be easily removed without damaging property. Responses ranged from the functional to the poetic: I wish this was… a butcher shop, a community garden, a bike rack, a place to sit and talk, an affordable farmer’s market, a taco stand, a donut/flower shop, full of nymphomaniacs with PhDs, a source of tasty healthy food I could afford, my art gallery, your dream, Heaven.

Horror storeys: the 10 worst London skyscrapers 'London is growing up!" trumpets a sign in the window of the New London Architecture centre. Inside, there's a forest of sticks and stumps, blobs and lumps – just some of the novelty silhouettes due to appear on the city's skyline over the coming years.

Generate a panorama Restriction of maximum width to 14400 Pixel (= horizontal extension 360° with zoom factor 2) 14.05.2011 - In recent days, the requests have increased massively to this application. As a consequence, sometimes there result long times of waiting for the panoramas to appear. Very broad panoramas bind disproportionate resources. Therefore I have restricted the maximum width of the full panoramas to allow the fairest possible sharing of the limited resources. The NYT's Visual Election Outcome Explorer The interactive tree allows readers to explore US Presidential election scenarios centered on battleground states How we made the interactive D3 decision tree The Project: 512 Paths to the White House The space of electoral college calculators is fairly well-trodden, so at first it seemed hard to do something new.

Pantone Colour of the Year 2016 announced - what colour will you be painting your walls next year? Every year, Pantone, the global authority on colour, chooses a new colour shade that will influence interior design, fashion and beauty. As THE major forecaster of colour trends and major trend influencer the announcement is anticipated eagerly by people across the world who love design and, of course, colour. This year's colour is: ROSE QUARTZ & SERENITY pantone.com For the first time ever, Pantone has chosen to blend two colours as its colour of the year - it explains: "In many parts of the world we are experiencing a gender blur as it relates to fashion, which has in turn impacted color trends throughout all other areas of design.

Steampunk from a Victorian Costumer’s Standpoint Val LaBore, a Victorian Costumer Guest Article by Valarie LaBore Editor’s Note: When I first came to know Val she was all into Steampunk. Being hesitant but intrigued with this up-and-coming genre I found myself attending her class on the subject a few years ago at Costume College. This article is her condensed version of that class. First off, don’t let the word Steampunk scare you. Stunners in the sky: London's top 10 towers As London faces a barrage of bulky towers, with 230 tall buildings planned to shoot up across the city over the coming months, here are 10 of the capital's best examples of aiming high. They prove that big doesn't necessarily mean bad, and that not every tower has to be an icon, topped with a jaunty profile or dressed in a jazzy outfit to succeed. After calling out 10 of the worst offenders last week, here's our run-down of the top 10 model performers, in the hope that some lessons might be learned from their success. 10. Natwest Tower Location: City of London | Floors: 47 | Height: 183m | Architect: Richard Seifert | Status: Completed 1980 | Use: Office

Open Access Maps at NYPL The Lionel Pincus & Princess Firyal Map Division is very proud to announce the release of more than 20,000 cartographic works as high resolution downloads. We believe these maps have no known US copyright restrictions.* To the extent that some jurisdictions grant NYPL an additional copyright in the digital reproductions of these maps, NYPL is distributing these images under a Creative Commons CC0 1.0 Universal Public Domain Dedication. The maps can be viewed through the New York Public Library’s Digital Collections page, and downloaded (!) Protovis Protovis composes custom views of data with simple marks such as bars and dots. Unlike low-level graphics libraries that quickly become tedious for visualization, Protovis defines marks through dynamic properties that encode data, allowing inheritance, scales and layouts to simplify construction. Protovis is free and open-source, provided under the BSD License.