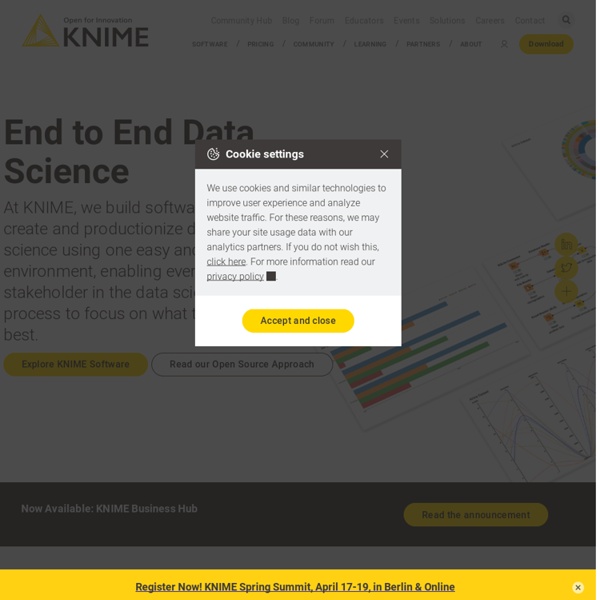 KNIME [naim] is a user-friendly graphical workbench for the entire analysis process: data access, data transformation, initial investigation, powerful predictive analytics, visualisation and reporting. The open integration platform provides over 1000 modules (nodes), including those of the KNIME community and its extensive partner network. KNIME can be downloaded onto the desktop and used free of charge. KNIME products include additional functionalities such as shared repositories, authentication, remote execution, scheduling, SOA integration and a web user interface as well as world-class support. Big data extensions are available for distributed frameworks such as Hadoop. KNIME is used by over 3000 organizations in more than 60 countries.

What is Maltego - Paterva Wiki From Paterva Wiki What is Maltego? With the continued growth of your organization, the people and hardware deployed to ensure that it remains in working order is essential, yet the threat picture of your “environment” is not always clear or complete. In fact, most often it’s not what we know that is harmful - it’s what we don’t know that causes the most damage. This being stated, how do you develop a clear profile of what the current deployment of your infrastructure resembles? What are the cutting edge tool platforms designed to offer the granularity essential to understand the complexity of your network, both physical and resource based?

How to become a data visualization ninja with 3 free tools for non-programmers We noticed many times between the lines of this blog how data visualization is in the hype and how this trend is growing and growing. That’s good news guys! It’s fun and it’s … success! But as more and more people join this wild bunch we have to take care of those who are not as skilled as we are yet. Retail + Social + Mobile = @WalmartLabs Eric Schmidt famously observed that every two days now, we create as much data as we did from the dawn of civilization until 2003. A lot of the new data is not locked away in enterprise databases, but is freely available to the world in the form of social media: status updates, tweets, blogs, and videos. At Kosmix, we’ve been building a platform, called the Social Genome, to organize this data deluge by adding a layer of semantic understanding. Conversations in social media revolve around “social elements” such as people, places, topics, products, and events. For example, when I tweet “Loved Angelina Jolie in Salt,” the tweet connects me (a user) to Angelia Jolie (an actress) and SALT (a movie).

Intro To Predictive Analytics Reading List Predictive Analytics Is Red Hot Why? What organization couldn’t benefit from making better decisions? Just ask the Obama campaign, which used sophisticated uplift modeling to target and influence swing voters. News about Cayra Mike Goodold (@GoodoldsOnTwitter) just commented at on my August 2010 post about Cayra that the developers hadn’t done a good job of specifying requirements. Well, sadly Cayra became orphan software years ago, so no one from Intalev, the originator of this nice little free package, will reply – I’ve tried several times to contact them because Cayra was open source at one time, and we had a volunteer willing to maintain and enhance it. But Intelev never responded. As I mention here, I saw a comment on Twitter that it doesn’t work on Windows 7. When I wrote that, I didn’t have a Win 7 PC to test it.

Systems - Background In the past years a new aspect of brain research received more and more attention. "Computational Neuroscience" is not so much about the biological and biochemical characteristics of neurons as about their computational logistics. Very ambitious projects like Henry Markram's Blue Brain Project try to disclose the brains functioning by reconstructing it at the synapse-level in the form of a computer model. The Blue Brain tries to model what is called a cortical column, a repetitive structure observed in all mammal brains. These columns were first described by Vernon B.

37 Data-ish Blogs You might not know it, but there are actually a ton of data and visualization blogs out there. I'm a bit of a feed addict subscribing to just about anything with a chart or a mention of statistics on it (and naturally have to do some feed-cleaning every now and then). In a follow up to my short list last year, here are the data-ish blogs, some old and some new, that continue to post interesting stuff. Data and Statistics By the Numbers - Column from The New York Times visual Op-ed columnist, Charles Blow, who also used to be NYT's graphics director.Data Mining - Matthew Hurst, scientist at Microsoft's MSN, also the co-creator of BlogPulse.Statistical Modeling - We might disagree on certain things, but Andrew's blog is one of the few active pure statistics blogs.The Numbers Guy - Data-minded reporting from Carl Bialik of the Wall Street Journal.Basketball Geek - Like statistical analysis and basketball? Statistical/Analytical Visualization

Cluster Execution Compute clusters often run idle because of a lack of applications that can be run in the cluster environment and the enormous effort required to operate, maintain, and support applications on the grid. KNIME Cluster Execution tackles this problem by providing a thin connection layer between KNIME and the cluster, which allows every node running in KNIME and every application integrated in KNIME to be executed on the cluster. Submission of data to the cluster and collection of the results is made very simple. Long-running analysis workflows can be executed on the compute cluster, thus releasing local resources for other productive work.

Predictive Analytics 101 Insight, not hindsight is the essence of predictive analytics. How organizations instrument, capture, create and use data is fundamentally changing the dynamics of work, life and leisure. I strongly believe that we are on the cusp of a multi-year analytics revolution that will transform everything. Using analytics to compete and innovate is a multi-dimensional issue. It ranges from simple (reporting) to complex (prediction). Reporting on what is happening in your business right now is the first step to making smart business decisions.

Editor - Argunet Argunet Editor is a free argument map editor for analyzing and visualizing complex debates. You can use it offline and save your debates on your hard-disk. Or you can use it as a client-server application. This allows you to share your debates and collaborate with others on the Argunet server. Fast sketching mode: You can use Argunet to quickly outline the macro-structure of a debate. Sketching debates is quite intuitive and you will get the hang of it without much effort.Logical precision: In contrast to other argument mapping software, Argunet doesn’t stop there. Home Page of Geoffrey Hinton I now work part-time for Google as a Distinguished Researcher and part-time for the University of Toronto as a Distinguished Emeritus Professor. For much of the year, I work at the University from 9.30am to 1.30pm and at the Google Toronto office at 111 Richmond Street from 2.00pm to 6.00pm. I also spend several months per year working full-time for Google in Mountain View, California. Check out the new web page for Machine Learning at Toronto Information for prospective students: I will not be taking any more graduate students, visiting students, summer students or visitors, so please do not apply to work with me. News Results of the 2012 competition to recognize 1000 different types of object How George Dahl won the competition to predict the activity of potential drugs How Vlad Mnih won the competition to predict job salaries from job advertisements How Laurens van der Maaten won the competition to visualize a dataset of potential drugs