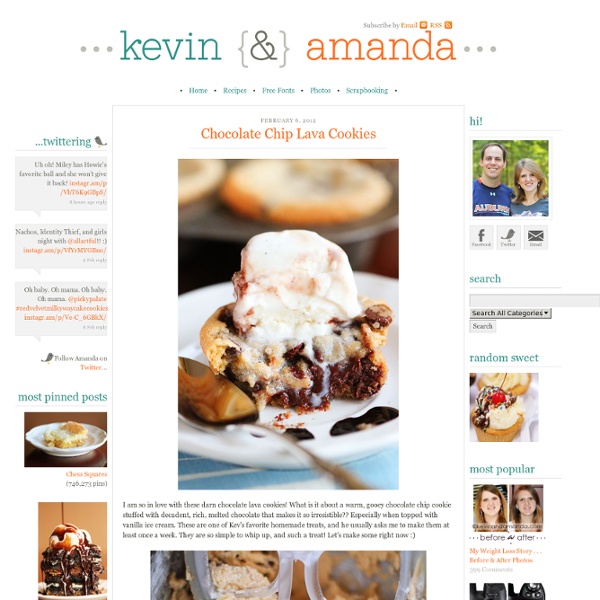 I am so in love with these darn chocolate lava cookies! What is it about a warm, gooey chocolate chip cookie stuffed with decadent, rich, melted chocolate that makes it so irresistible?? Especially when topped with vanilla ice cream. These are one of Kev’s favorite homemade treats, and he usually asks me to make them at least once a week. They are so simple to whip up, and such a treat! Let’s make some right now :) All you really need for these fabulous cookies is your favorite cookie dough and a bag of chocolate chips. Since these cookies are absolutely gushing with delicious rich chocolate, my favorite chocolate chips for this recipe are the Hersey’s Milk Chocolate chips. Now let’s make some chocolate lava cookies! Place the flattened cookie dough in the bottom of a well-greased standard sized muffin tin. Now for our gooey, rich milk chocolate filling. Lay the Ziploc bag flat in the microwave, spreading out the chocolate chips in a single layer. Heaven help me. Mama mia. 1. 2. 3.

Sweet Pea's Kitchen - StumbleUpon Snickerdoodle Muffins I have been obsessed with Pinterest lately! Pinning this and that all while trying not to drool all over my computer. A San Diego food blog sharing restaurant reviews and recipes Wednesday, June 1, 2011 I love lava cakes. For a while now I’ve had this idea playing in my mind to create lava cookies. I tried making nutella lava cookies before, but they didn’t come out exactly as I’d hoped, so I wanted to attempt it again. I took a chocolate cookie recipe that I love, which is thick and sturdy and put some nutella in the middle of the cookie dough. These came out great.

Pip & Ebby - Pip & Ebby - Hot cocoa cookies I am a teeny bit obsessed with the cookies from the most recent issue of EveryDay with Rachael Ray magazine. This recipe is the second of many cookie recipes on my list to make this holiday season. Sweets are taking over my life! Just ask my coworkers. Ancient Greek recipes - Ancient greek food If you redirected to this page it is most probably because you requested to view a page of the previous version of Greek-Recipe.com. Greek-Recipe.com recently updated its look and feel and Content Management Platform from PHPNuke to WordPress. The site is now using a responsive layout, which allows to be visible also to tablets and smartphones.

Brown Butter Double Fudge Chocolate Chip Cookie Dough Cookies Little bit of a mouthful there. But it’s like a cookie on top of another cookie! Yeah. Like total dirty cookie on cookie action. Except these ones down below wanted to try a few different positions. Valentine’s Day Treats: Red Velvet Cheesecake Brownies Written By: Julia Mercier Decadent Red Velvet Cheesecake Brownies 393 Chocolate Chip Lava Cookies I am so in love with these darn chocolate lava cookies! What is it about a warm, gooey chocolate chip cookie stuffed with decadent, rich, melted chocolate that makes it so irresistible?? Especially when topped with vanilla ice cream.

Global Food Disparity: A Photo Diary In an increasingly globalized world, it’s still sometimes shocking to see just how disparate our lives are compared with other human beings around the world. A book of photographs by Peter Menzel called "Hungry Planet: What the World Eats" ("©Peter Menzel www.menzelphoto.com. Ten Speed Press, published in 2005) makes a relevant point with great irony: at a time when hundreds of millions of people don't have enough to eat, hundreds of millions more are eating too much and are overweight or obese. In observing what six billion eat for dinner the authors note, "Today, more people are overweight than underweight." It is these cultural differences, emphasized and reinforced by the author, which exemplifies the lifestyles and dietary habits of people around the world.

The Family Kitchen I have been experimenting with different mug cakes every since I heard about them about a year ago. None of them have been winners. They were either too chewy, too dry, or not sweet enough. Well, I continued experimenting, and thought why not add some decadent Nutella into the mix. I modified the classic mug cake recipe, added Nutella, and a little more milk and oil than I had been using before. Reese's Peanut Butter Cup Brownie Cookies Reese’s Peanut Butter Cup Brownie Cookies Brookies…two of my favorite desserts in one incredibly ooey, gooey treat. Half chocolate chip cookie and half fudgy brownie…does it get any better than that? You wouldn’t think so, but that’s when I decided to throw in some chopped Reese’s Peanut Butter Cups into one of my favorite cookie recipes. The result? Well look for yourself….

DID YOU KNOW… You’ve probably heard all about the amazing uses of distilled vinegar, using olive oil to condition leather and even that nifty trick of using a potato to loosen a broken light bulb. But today, we are going to talk about some of the not-so-known uses for everyday items like coffee filters, marshmallows and dryer sheets. COFFEE FILTERS – The little paper-like liners that make your morning cup of joe possible have many more uses than just getting your morning started. Because coffee filters are lint-free and absorb oil very well, there are many, many uses for these little guys.