Forget oil — the world is running out of chocolate! MARK your calendar: January 1 2020. 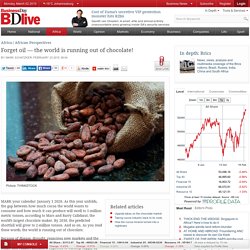 As this year unfolds, the gap between how much cocoa the world wants to consume and how much it can produce will swell to 1-million metric tonnes, according to Mars and Barry Callebaut, the world’s largest chocolate maker. By 2030, the predicted shortfall will grow to 2-million tonnes. And so on. As you read these words, the world is running out of chocolate.

Because of disease, drought, rapacious new markets and the displacement of cocoa by more productive crops such as maize and rubber, demand is expected to outstrip supply by an additional 1-million tonnes every decade for the foreseeable future. Last year, despite an unexpected bumper crop, supply barely kept pace with the upswing in demand. The world’s most universally delectable treat has begun a journey from being very loved and very common, to being very loved and a good deal less common. But that is the least of the confection’s problems. Cocoa used to be big here. Bloomberg Picture: THINKSTOCK. What’s the Future of Chocolate? Tech, Innovation, and Human Connection. What’s the Future of Chocolate? 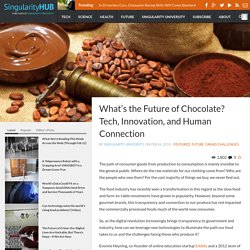 Tech, Innovation, and Human Connection The path of consumer goods from production to consumption is mainly invisible to the general public. Where do the raw materials for our clothing come from? Who are the people who sew them? For the vast majority of things we buy, we never find out. The food industry has recently seen a transformation in this regard as the slow food and farm-to-table movements have grown in popularity. So, as the digital revolution increasingly brings transparency to government and industry, how can we leverage new technologies to illuminate the path our food takes to us and the challenges facing those who produce it? Evonne Heyning, co-founder of online education startup Eddefy and a 2012 alum of Singularity University, has some ideas on how to make that happen.

Heyning recently won the $10K Singularity University Labs Open Innovation Challenge. Mali, West Africa What is Eddefy? #TheBrief: How Ebola and Fungus May Speed Up the Chocolate Shortage. The world’s biggest chocolate-maker says we’re running out of chocolate. The chocolate deficit is about to go way up. 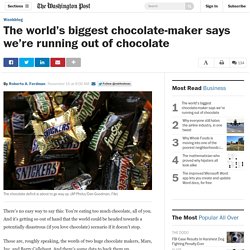 (AP Photo/Dan Goodman, File) There's no easy way to say this: You're eating too much chocolate, all of you. And it's getting so out of hand that the world could be headed towards a potentially disastrous (if you love chocolate) scenario if it doesn't stop. The surprising Ebola connection to chocolate. Just when you thought you knew all the consequences of the Ebola pandemic, here’s another one: it could affect the supply of chocolate. 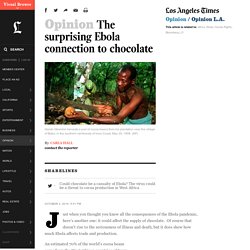 Of course that doesn’t rise to the seriousness of illness and death, but it does show how much Ebola affects trade and production. An estimated 70% of the world’s cocoa beans come from the West African countries of Ivory Coast, Ghana, Nigeria and Cameroon. Ivory Coast is the world’s largest producer, exporting 37.8% of the world’s cocoa, according to the Wall Street Journal. (In fact, Ivory Coast just posted a record harvest and the government increased its minimum price to farmers.)

As with other crops and minerals in Africa, there are human rights and economic concerns about workers (cocoa growing and harvesting is labor intensive) being paid fairly and about children being exploited for their labor. Can science save the future of chocolate? Choco-loco! Home Chocolate 3D Printers 3-5 Years Away. Picture this: It’s your wife’s birthday, and you’ve completely forgotten to buy her a gift. 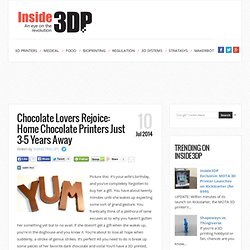 You have about twenty minutes until she wakes up expecting some sort of grand gesture. You frantically think of a plethora of lame excuses as to why you haven’t gotten her something yet but to no avail. If she doesn’t get a gift when she wakes up, you’re in the doghouse and you know it. You’re about to lose all hope when suddenly, a stroke of genius strikes. It’s perfect! UK-based chocolate 3D printing company Choc Edge announced it should have market-ready chocolate 3D printers available in the next three to five years. Choc Edge already has chocolate printers available to purchase, but they can only print small chocolate confections and still cost a hefty $6,700. Another company divulging into 3D printed chocolate is 3D Systems, who partnered with Hershey’s in January on a multi-year joint agreement to develop 3D printed confectionary treats. Not drooling yet? Hershey to Launch the First Ever 3D Printed Chocolate Exhibit.

When it comes to the 3D printing of food, probably the most popular, easiest, and most delectable food to print with is chocolate. 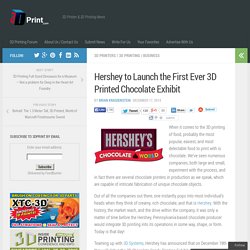 We’ve seen numerous companies, both large and small, experiment with the process, and in fact there are several chocolate printers in production as we speak, which are capable of intricate fabrication of unique chocolate objects. Out of all the companies out there, one instantly pops into most individual’s heads when they think of creamy, rich chocolate, and that is Hershey. 3D Printing Chocolate. Yes, you can 3D print chocolate. 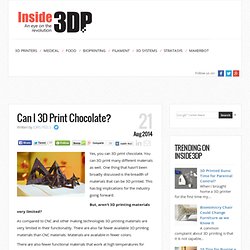 You can 3D print many different materials as well. One thing that hasn’t been broadly discussed is the breadth of materials that can be 3D printed. This has big implications for the industry going forward. But, aren’t 3D printing materials very limited? As compared to CNC and other making technologies 3D printing materials are very limited in their functionality. There are also fewer functional materials that work at high temperatures for example or are certified for use in the body. With 3D printing there are more complexities and the material needs more stringent requirements. Because many 3D printers rely on melting/hardening as a part of their process on the one hand low heat deflection temperatures are advantageous to the 3D printing process but if the final part has a low heat deflection temperature than this may limit its functionality.

Currently many manufacturers are developing new materials with better mechanical properties. Too hot for chocolate? - CIAT Blog. If chocolate is doomed, are we too? - CIAT Blog.