Psychiatryadvisor. The Psychiatry Advisor take: Nutrients in chocolate may be able to maintain brain health and prevent age-related neurocognitive disorders, such as Alzheimer’s disease. 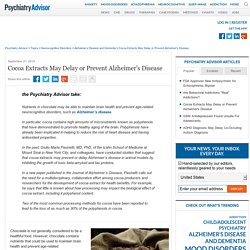 In particular, cocoa contains high amounts of micronutrients known as polyphenols that have demonstrated to promote healthy aging of the brain. Polyphenols have already been implicated in helping to reduce the risk of heart disease and having antioxidant properties. In the past, Giulio Maria Pasinetti, MD, PhD, of the Icahn School of Medicine at Mount Sinai in New York City, and colleagues, have conducted studies that suggest that cocoa extracts may prevent or delay Alzhimeer’s disease in animal models by inhibiting the growth of toxic beta-amyloid and tau proteins.

In a new paper published in the Journal of Alzheimer’s Disease, Pasinetti calls out the need for a multidisciplinary, collaborative effort among cocoa producers and researchers for the development of cocoa extract for health benefits. Mars, Inc. and Barry Callebaut Say the World Is Running Out of Chocolate, Predict Shortage by 2020. A shortage of the beloved confection will soon be upon us, analysts say. 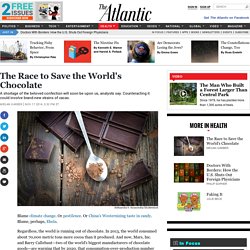 Counteracting it could involve brand-new strains of cacao. Aleksandra H. Kossowska/Shutterstock Blame climate change. Or pestilence. Regardless, the world is running out of chocolate. What will that mean for the average chocoholic? And then there's the other obvious way to preserve cacao supplies while keeping prices steady: Reducing the sizes of chocolate treats. So why can't the world's chocolate supply keep up with its chocolate demand? Those traits include resistance to threatening organisms—in the past, cacao crops have been blighted by fungi with names like "witches' broom" and "frosty pod rot"—and, of course, a flavor that is pleasing to the human palette. As a response to the chocolate shortage, farmers are investing in new strains of cacao. There's another strain that holds promise, too, though. Jane Says: Chocolate Isn't a Cure-All, but That Shouldn't Keep You From Eating It.

“The media make it sound like chocolate is basically medicine for your heart. 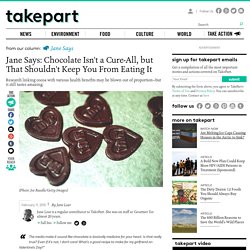 Is that really true? Even if it’s not, I don’t care! What’s a good recipe to make for my girlfriend on Valentine’s Day?” —Colin Barro The idea that chocolate—one of life’s most alluring yet affordable indulgences—may actually be good for our cardiovascular system is like catnip to journalists (and hype-loving headline writers). I’m all for enjoying a Valentine’s Day box of bonbons without a twinge of guilt, but nevertheless, “there can be a huge gap between what scientific evidence tells us and what gets reported to the public by the media,” wrote Kevin Lomangino in the HealthNewsReview watchdog blog in 2011.

“An important, but less appreciated, factor is the influence of press offices at scientific journals and at academic institutions,” Lomangino added. Unfortunately, it was in no way official. I blame our obsession with antioxidants for all the fuss. Oh, if only it were that simple. 1. 2. 3. 4. 5. 6. Benefits of eating dark chocolate - KGUN9. By Stella Inger. 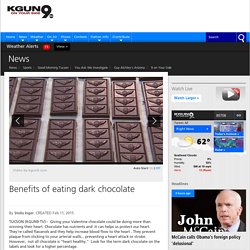 CREATED Feb 11, 2015 TUCSON (KGUN9-TV)-- Giving your Valentine chocolate could be doing more than winning their heart. Chocolate has nutrients and it can helps us protect our heart. They're called flavanols and they help increase blood flow to the heart . They prevent plaque from sticking to your arterial walls... preventing a heart attack or stroke. Other benefits of cocoa powder, the main ingredient of dark chocolate, may include raising "good" cholesterol levels, the high density lipids or HDL, while lowering "bad" cholesterol levels or LDL . Jane Says: Chocolate Isn't a Cure-All, but That Shouldn't Keep You From Eating It.

Chocolate May Boost Learning. Listen to the recording of this article below: After seeing the effects on the body and the brain for himself, Daniel Cochece Davis of Illinois State University reveals that chocolate may boost learning. 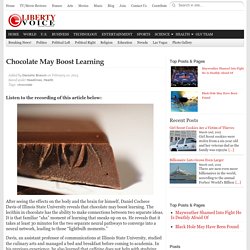 The lecithin in chocolate has the ability to make connections between two separate ideas. It is that familiar “aha” moment of learning that sneaks up on us. He reveals that it takes at least 30 minutes for the two separate neural pathways to converge into a neural network, leading to those “lightbulb moments.” Davis, an assistant professor of communications at Illinois State University, studied the culinary arts and managed a bed and breakfast before coming to academia. This is good news for students who want to improve their study habits and a boon to senior citizens as well. The concept of neurovascular coupling links the brain’s blood flow with its ability to remember and think. Hot Cocoa. Dietary cocoa flavanols reverse age-related memory decline in mice. Dietary cocoa flavanols -- naturally occurring bioactives found in cocoa -- reversed age-related memory decline in healthy older adults, according to a study led by Columbia University Medical Center (CUMC) scientists. 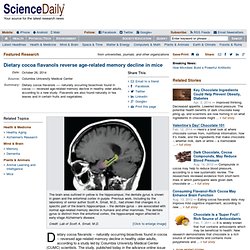 The study, published today in the advance online issue of Nature Neuroscience, provides the first direct evidence that one component of age-related memory decline in humans is caused by changes in a specific region of the brain and that this form of memory decline can be improved by a dietary intervention. As people age, they typically show some decline in cognitive abilities, including learning and remembering such things as the names of new acquaintances or where one parked the car or placed one's keys. This normal age-related memory decline starts in early adulthood but usually does not have any noticeable impact on quality of life until people reach their fifties or sixties.