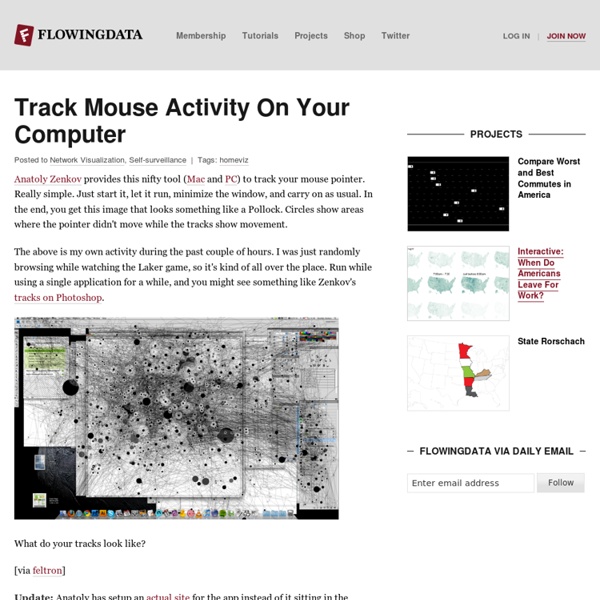 Anatoly Zenkov provides this nifty tool (Mac and PC) to track your mouse pointer. Really simple. Just start it, let it run, minimize the window, and carry on as usual. In the end, you get this image that looks something like a Pollock. Circles show areas where the pointer didn't move while the tracks show movement. The above is my own activity during the past couple of hours. What do your tracks look like? [via feltron] Update: Anatoly has setup an actual site for the app instead of it sitting in the dropbox boonies of boontown.

Billboard Houses As more and more advertising goes online and transportation conservation becomes an increasing economic and ecological concern, what is the future fate of the infamous billboard? One proposal by Front Architects suggests turning these into lofted homes – small houses to be sure, but located in some potentially fascinating places. Some of these unusually thin homes could be built in place from scratch, others could be transported to new locations or even left where they are in the urban environment. More Classic Pop Icons In A Different Light (PICS 05 Oct These images were gathered from all over the internets but it has come to our attention that a few of them can be purchased as shirts from various sites. If you’re looking to find some terrific t-shirts (beyond just what you may see here as well) visit Threadless , Shirt Woot! , Tee Fury and Glennz Tees . Check out Part 1 in this series here , Part 2 here , Part 3 here and Part 4 here .

30 Poster Design Tutorials for Photoshop Photoshop allows designers to create amazing posters that can be used for a variety or purposes like movie promos, product promos, event promos, as well as just for fun and practice. There are a lot of quality tutorials out there that teach the process of designing a poster in Photoshop. In this post we’ll feature 30 poster tutorials from a variety of different designers. In this collection you should find at least a few tutorials that teach something that could be helpful in your own work. Looking for hosting?

The OFFICIAL Watching Paint Dry Webcam The PaintCam has been brought to you by: Mirror Images Web ServicesProviding affordable & professional web services to small businesses and individuals. Images & Content © 1999 - 2014, Patti A. McEwin LED Lights Make Augmented Vision a Reality LED Lights Make Augmented Vision a Reality Okay, this is just freaky. We know LED lights are versatile enough to be used for practically anything, but LED contact lenses? Really?! Yes, as it turns out, really.

Ph'nglui Search Fhtagn! The Sad World Of The Misunderstood House Spider If there’s one arthropod with an unfortunately bad rap in the human world, it’s the common house spider. Generally reclusive and non-threatening to people, spiders eat all the creatures that annoy humans (mosquitoes, flies, and roaches) while occupying the empty crevices of human shelter. And yet their very presence makes the average person go after these benevolent creatures with a fury. And so we present the sad world of the Misunderstood House Spider: Enjoy the misunderstood house spider meme? List of legendary creatures (B) - Wikipedia, the free encyclopedia - StumbleUpon From Wikipedia, the free encyclopedia Buraq from a 17th-century Mughal miniature

Battlefield 3 Becomes Real - Creating The Ultimate FPS Simulator -... Battlefield 3 launched with over 3 million pre-orders alone, and already players and teams of people are trying to find new and more immersive ways of playing the game. The hosts of UK’s Channel 5 The Gadget Show decided to take this to the next level by creating a simulation device that sports a full 360 degree HD projected screen – for total visual immersion – and a combination of roller driven omni-directional treadmills and infra-red cameras so that players can actually “walk around” inside the game and be tracked accurately. All of this is housed inside of a giant silver tent that reminds me of the clown tent I set up in my living room every so often, but even more awesome. This video shows the research and construction of the simulation tent from start to finish, and over all I’m pretty damn impressed with what these guys came up with. Battlefield 3 Simulator Tent

7 Movies That Put Insane Work Into Details You Didnt Notice Easter eggs are usually kind of a bum deal. Sure, when you finally find one it's like having a secret conversation with your favorite director ... but he's kind of a jerk, the conversation is one-sided and it's usually all about how much of a loser you are for spending a hundred hours sifting through the special features on your Firefly DVD just to find something Joss Whedon slapped together in five minutes. What follows are the direct opposite of that: These are seven instances where the creators poured their blood, sweat and several other more unsavory fluids into creating something and put it right in front of your face ... and you didn't even notice. Now who's the jerk, huh? #7.

Eating App Tells You How Healthy—or Not—Your Meal Was Most people have a pretty good idea of what it means to eat healthy foods, but few manage to do it. A new app called the Eatery aims to change that by having users rate one another’s meals and providing slick data visualizations of a person’s habits over time. The app’s users have rated more than two million meals so far. When overlaid on maps, this data reveals patterns in healthy eating in cities like New York and San Francisco. Eatery users snap a photo of a meal, and that photo is automatically tagged for location. After users take a photo of a meal, they are prompted to quickly rate the healthfulness of other users’ meals by looking at their photos, in a quick process intended to be fun.

20 PSD Tuts That Will Turn You Into A Photoshop Guru Many people can use Photoshop, but only a select few can call themselves gurus. Learn all the methods in the 20 tutorials below and you’ll be well on your way to joining this elite. Rather than focus on tuts for beginners, intermediates or advanced users, we’ve simply chosen ones which produce jaw-dropping effects. All of them are easy to follow, although most do require at least some prior knowledge and experience. 1.