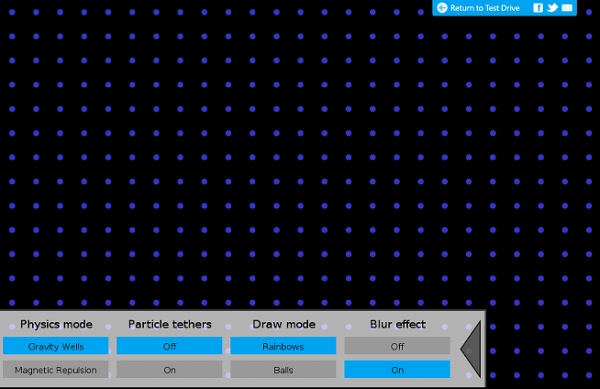 Rotational illusion Rotating illusion "Rotating snakes" Circular snakes appear to rotate 'spontaneously'. Copyright A.Kitaoka 2003 (September 2, 2003) Otomata 16 Jul 2011 Click on the grid below to add cells, click on cells to change their direction, and press play to listen to your music. Update: Click here to get Otomata for your iPhone / iPod / iPad! Quantum physicists show a small amount of randomness can be amplified without limit Once again quantum physics gives us philosophical implications: physicists showed how a small amount of randomness can be amplified without limit. Classical physics is deterministic: for example, we can determine the position and velocity of a particle at any time in the future. Quantum theory, on the other hand, states that there exist processes which are fundamentally random: for instance, the outcomes of measurements of quantum particles seem to be determined entirely by chance. This is why Einstein argued in a publication in 1935 that the quantum theory is incomplete, and yet another kind of higher theory must exist, but up to the present time there has been no proof either that the world is purely deterministic and all randomness is due solely to a lack of knowledge about certain events, or that everything happens purely by chance. However, ETH Zurich physicists have now succeeded in showing in a thought experiment that randomness can be amplified.

8 Tips on How to Have an Out of Body Experience Steps Method 1 of 4: Readying Your Mind and Body 1Choose a quiet place you find relaxing. You can be indoors or outdoors, as long as you are comfortable. This doesnt exist Donate Login Remember Me Create An Account Forgot Password // Provide alternate content for browsers that do not support scripting // or for those that have scripting disabled. List of paradoxes This is a list of paradoxes, grouped thematically. The grouping is approximate, as paradoxes may fit into more than one category. Because of varying definitions of the term paradox, some of the following are not considered to be paradoxes by everyone. This list collects only scenarios that have been called a paradox by at least one source and have their own article. Although considered paradoxes, some of these are based on fallacious reasoning, or incomplete/faulty analysis.

- StumbleUpon A Theory on the Deja Vu or Déjà vu Phenomenon During the time while this web-page has been on the Internet, more than three thousand people (up to Nov 2009) have e-mailed to say that they have Déjà Vu experiences. That is interesting, but their descriptions have virtually always described some different phenomenon. If a person has any pre-knowledge of something that is yet to happen, like in a dream, it cannot be Déjà Vu, and is likely to be some type of Precognition. (Even if the Precognition is only a few seconds before the event.) A person cannot know that a Déjà Vu experience is coming, and also, it is also always sensed as INSTANTANEOUS, as being a sudden realization that an experience "was somehow familiar".

Artist Takes Every Drug Known to Man, Draws Self Portraits After Each Use This is all kinds of cool, and everything your mother told you not to do. Bryan Lewis Saunders is an artist from Washington D.C., not just any artist though. Saunders prefers to take a more unconventional approach to his artwork. Arguably his most interesting project, entitled DRUGS is described as follows: Below, you can view a collection of portraits Saunders drew while under the influence of various substances ranging from cocaine, to marijuana, to DMT. Each portrait is an astonishing look into the mind of someone tweaked out on drugs, something that your eyes will surely appreciate.

Public Art Concepts - Dan Sternof Beyer 2011 Download the PDF of these ideas : Public Art Concepts - Dan Sternof Beyer 2011 (2mb) [ New American Public Art ] Breakthrough in physics may lead to new view of magnetism An artistic representation of a ‘polaron’ – a new quantum state, or a ‘quasiparticle’. The potassium atom in the middle (blue) repels the smaller lithium atoms (yellow). This creates a complex state, which physically can be best described as a quasiparticle (Illustration: Harald Ritsch) Ferromagnetism is a phenomenon we encounter everywhere in nature. It’s the form of magnetism which most people are familiar with, as exhibited in horseshoe magnets, refrigerator magnets and in a wide range of technologies such as hard drives and medical equipment.

Cushion Geometrical illusion with stereoscopic impressions "A bulge" The floor appears to bulge out, even though all the squares in the figure are equal. The Geek-Art of Blaz Porenta Illustrator from Slovenia, Blaz Porenta did an incredible job on those super heroes… Check the full article if you don’t want to miss Thor, Iron Man, Hulk and their friends. And bonus track : The 3 Little Pigs and the Red Riding Hood like you’ve never seen them before… Believe me ! And long live the Geek-Art Store ! L’illustrateur Slovène Blaz Porenta a fait un boulot monstrueux sur les super héros de Marvel.