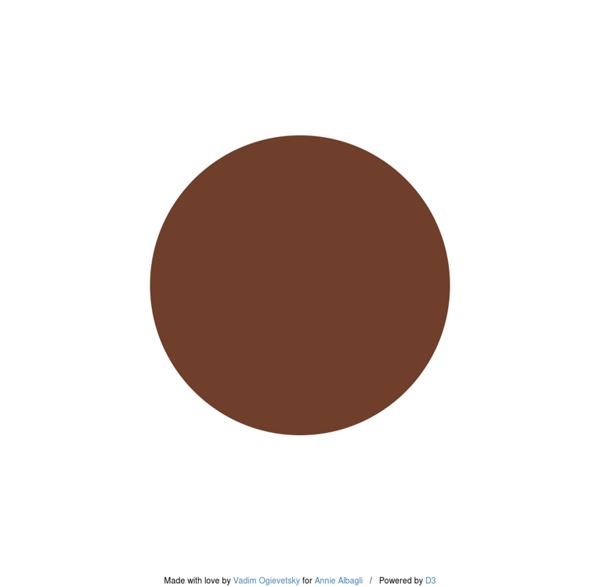 lapse: Landsat Satellite Images of Climate Change, via Google Earth Engine TIME and Space | By Jeffrey Kluger Spacecraft and telescopes are not built by people interested in what’s going on at home. Rockets fly in one direction: up. The Product Space and the Wealth of Nations The concept of proximity formalizes the intuitive idea that the ability of a country to produce a product depends on its ability to produce other ones. For example, a country with the ability to export apples will probably have most of the conditions suitable to export pears. Unfortunately this intuitive definition of proximity is, very cumbersome to measure. It requires quantifying the overlap between the set of markets related to each product. On the paper "The Product Space Conditions the Development of Nations", published at Science magazine, the authors explain how they've measured proximity by using an outcome based method founded on the assumption that similar products are more likely to be exported in tandem.

Two Kids Made 357 Original Gaming Cards Images via I was about 10 years old before it even occurred to me that binders could contain anything but gaming cards. They’re a ubiquitous part of childhood, but they’re also pretty pricey. But with a bit of imagination and a whole lot of budding talent, two kid brothers made 357 unique cards of their own. 2012 March 12 - The Scale of the Universe Interactive Discover the cosmos! Each day a different image or photograph of our fascinating universe is featured, along with a brief explanation written by a professional astronomer. 2012 March 12 The Scale of the Universe - Interactive Flash Animation Credit & Copyright: Cary & Michael Huang Explanation: What does the universe look like on small scales?

An awesome stop motion history of the world Video Log in Dame An awesome stop motion history of the world It took Kalle Mattson, Kevin Parry, and friends over six months to create this cute stop motion short, a lot shorter than the time-frame covered in the video! Psychology of Color [Infographic] Perhaps no choice is as vital to marketing as color. Whether you are selecting the color for a product or for your email marketing campaign, color has tremendous impact on all of us. Subconsciously, we associate different colors with different things. This infographic examines the psychology of color and looks at some common associations of different colors. gource visualisation tool Gource is a software version control visualization tool. See more of Gource in action on the Videos page. Introduction Software projects are displayed by Gource as an animated tree with the root directory of the project at its centre.

50 Things Everyone Should Know by Mark and Angel Self-reliance is a vital key to living a healthy, productive life. To be self-reliant one must master a basic set of skills, more or less making them a jack of all trades. Contrary to what you may have learned in school, a jack of all trades is far more equipped to deal with life than a specialized master of only one. While not totally comprehensive , here is a list of 50 things everyone should know how to do.