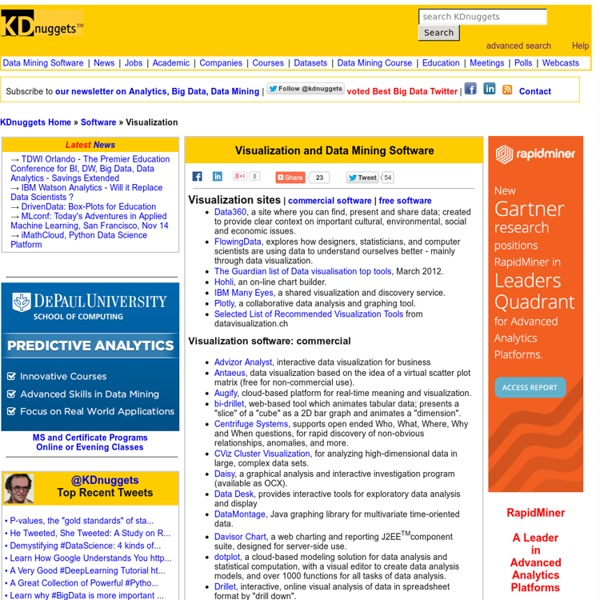 HTML5 This Version: Latest Published Version: Latest Version of HTML: Latest Editor's Draft of HTML: Previous Version: Previous Recommendation: The Art of Data Visualization: How to Tell Complex Stories Through Smart Design The volume of data in our age is so vast that whole new research fields have blossomed to develop better and more efficient ways of presenting and organizing information. One such field is data visualization, which can be translated in plain English as visual representations of information. The PBS “Off Book” series turned its attention to data visualization in a short video featuring Edward Tufte, a statistician and professor emeritus at Yale, along with three young designers on the frontiers of data visualization. Titled “The Art of Data Visualization,” the video does a good job of demonstrating how good design—from scientific visualization to pop infographics—is more important than ever. In much the same way that Marshall McLuhan spoke about principles of communication, Tufte talks in the video about what makes for elegant and effective design.

SWF Charts > Introduction XML/SWF Charts is a simple, yet powerful tool to create attractive charts and graphs from XML data. Create an XML source to describe a chart, then pass it to this tool's flash file to generate the chart. The XML source can be prepared manually, or generated dynamically using any scripting language (PHP, ASP, CFML, Perl, etc.) XML/SWF Charts makes the best of both the XML and SWF worlds. XML provides flexible data generation, and Flash provides the best graphic quality. Network Visualization Immersion by the MIT Media Lab is a view into your inbox that shows who you interact with via email over the years. Immersion is an invitation to dive into the history of your email life in a platform that offers you the safety of knowing that you can always delete your data.Just like a cubist painting, Immersion presents users with a number of different perspectives of their email data. It provides a tool for self-reflection at a time where the zeitgeist is one of self-promotion. It provides an artistic representation that exists only in the presence of the visitor. It helps explore privacy by showing users data that they have already shared with others. Finally, it presents users wanting to be more strategic with their professional interactions, with a map to plan more effectively who they connect with.

Chris Milk, Spike Jonze, and VICE News Bring the First-Ever Virtual Reality Newscast to Sundance What if, instead of watching a news broadcast about the latest protest, you could walk into it? Digital artist and video director Chris Milk, filmmaker and VICE creative director Spike Jonze, and VICE News have partnered to do just that, producing the first-ever virtual reality news broadcast, and bringing a new dimension — literally — to coverage of the recent protests against police killings. The film — "VICE News VR: Millions March" — takes viewers into the December 13 rally that saw 60,000 protesters descend on the streets of New York to demand greater police accountability. Algorithm That Counts Rap Rhymes and Scouts Mad Lines “Men lie, women lie, numbers don’t” – Jay Z Among the many things rappers like to boast about, some are relatively easy to quantify, like money, whereas rhyming skills are something that have been very difficult to measure – up till now. In this post, I’ll present Raplyzer, a computer program which automatically detects rhymes from rap lyrics and which is used to rank popular rappers based on their average Rhyme factor. I’ll also present another program called BattleBot, which is a search engine for rhyming rap lines based on the algorithm used in Raplyzer. Rap Rhyming 101

Tech hotshots: The rise of the dataviz expert - Network World Computerworld - A picture's worth a million data points. That's the mantra, anyway, in business analytics these days. As the big data trend intensifies and analytics become more ingrained in corporations, the need for people who can present data in easily intelligible ways is rising. Last fall, Gartner predicted that there would be 4.4 million big data jobs by 2015, many requiring new, nontraditional skills like data visualization. Tutorials How to Edit R Charts in Adobe Illustrator A detailed guide for R users who want to polish their charts in the popular graphic design app for readability and aesthetics. How to Make an Animated Map in R, Part 4

Category/Science/scientific-visualization From Free Software Directory Broaden your selection: Category/Science scientific-visualization (107) The best rapper alive, as decided by computers Finally, data science has begun tackling rap. It makes sense, because rap is a pretty good subject for algorithms to latch onto: lyrics are a dense data set, analysts have a lot of words to work with, and songs are heavy on allusions and references that make for fascinating connections. In 2014, Matt Daniels ranked rappers by the breadth of their vocabularies (Aesop Rock and GZA took first and second place, respectively). Now, Eric Malmi, a Finnish doctoral candidate, has looked at something more integral to rap: rhymes. Assonance is a great way to judge rhyming in rap Malmi analyzed popular rap lyrics using something called assonant rhymes.