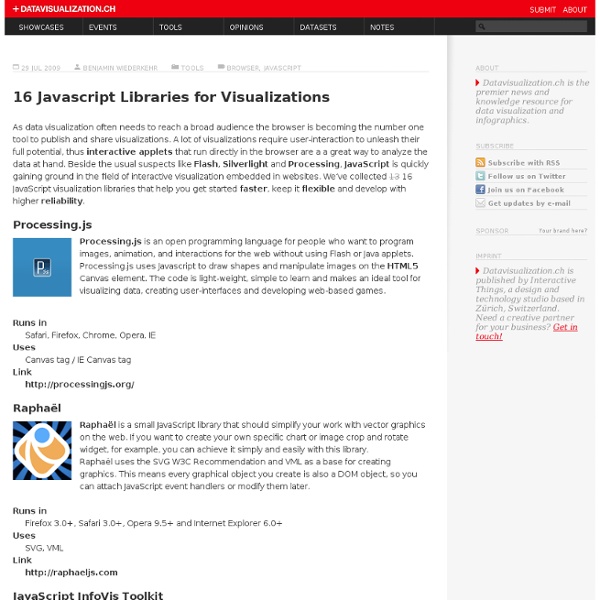 Moment.js - A lightweight javascript date library 20 Fresh JavaScript Data Visualization Libraries There are plenty of JavaScript libraries out there for rendering your otherwise plain and boring numerical data into beautiful, interactive, and informative visualizations. The beauty of using JavaScript for data visualization is that, if created correctly, your data will be highly accessible (usually via HTML tables). A long time ago (2008), I wrote about JavaScript solutions for graphing and charting data and this article revisits the topic with twenty more JavaScript libraries that you can use to bring your data to life. 1. Highcharts Highcharts is one of the most promising JavaScript charting libraries to hit the scene recently, with its large array of features including seven charting types (line, pie, and bar among them), the ability to zoom in and out of charts, and tooltips for offering more information about data points. 2. gRaphaël gRaphaël is a charting library based on Raphaël, a vector graphics drawing JavaScript library. 3. 4. jQuery Visualize Plugin 5. moochart 6. 7. dygraphs

D3.js - Data-Driven Documents jqPlot Charts and Graphs for jQuery Backbone patterns Building apps with Backbone.js Here, I try to document the good practices that our team has learned along the way building Backbone applications. This document assumes that you already have some knowledge of Backbone.js, jQuery, and of course, JavaScript itself. Table of contents Thanks d3.js What Jobs Are There in Data Visualization? I got an email from Harald asking, "How does the job market for DV developers work?" I find this question, or some variation of it, in my inbox every now and then, so I thought I'd give it a shot. I am after all a graduate student who will graduate eventually, so let's take a look at some of the options. In the News Infographics in the news have been commonplace for a while now. Examples: The New York Times / MSNBC / Washington Post Design Studios There are a lot of data visualization specialists who masquerade as graphic designers. Examples: Stamen Design / Bestiario Analytics Groups Analytics is on the opposite site of the spectrum. Example: Juice Analytics / Axis Maps Research Labs While the analytics groups tend to be more about application of existing visualization techniques, there are research labs that primarily think of ways to improve the existing or new representations of data. Examples: AT&T Labs / IBM Visual Communications Lab Academics This one is sort of obvious I guess.

Flot: Attractive JavaScript plotting for jQuery Build a Contacts Manager Using Backbone.js: Part 4 In part four of this series, we saw how easy it is to add and remove models from our collection, and keep the page updated in sync with the changes. In this part, we're going to look at editing existing model data. Getting Started We'll start out by adding another simple button to the template, which will enable editing of its data: As we are adding this button to our existing template, we can also add an entirely new template that can be used to render an editable form in which the model data can be changed. The new template consists mostly of <input> elements that expose the editable data. Next we can bind some event handlers for the new buttons we've added; update the events object in the ContactView class so that it contains the following new bindings: Don't forget to add the trailing comma to the end of the existing binding! Switching a Contact Into Edit Mode Adding a New Type Updating the Model Backbone models have a setter method that can be used to set any attribute. Summary

Adventures in Mockjax | Ja.mesBrown JavaScript and Web Development If you are developing web applications that utilize Ajax (and most do today) and are using jQuery and/or Backbone.js, you should be building with mock Ajax JSON responses. You can view the code on Github: or the examples: Servers are slow / Rapid Iteration When developing against a local server, the ajax response will typically 100-300 milliseconds, but could even be longer. Endpoints Unavailable or Developing on an Airplane There are a number of reasons that an API endpoint could be unavailable and inevitably, it will be when you want to work on your application. Undeveloped Endpoints If you are working in a team, or even on your own project, and the server-side code isn’t completed yet, Ajax mocking would allow you to complete the front-end code before the back-end is complete. Unit Testing After rapid iteration, unit testing is probably the number one reason for mocking. Slow or Unavailable Server Simulation