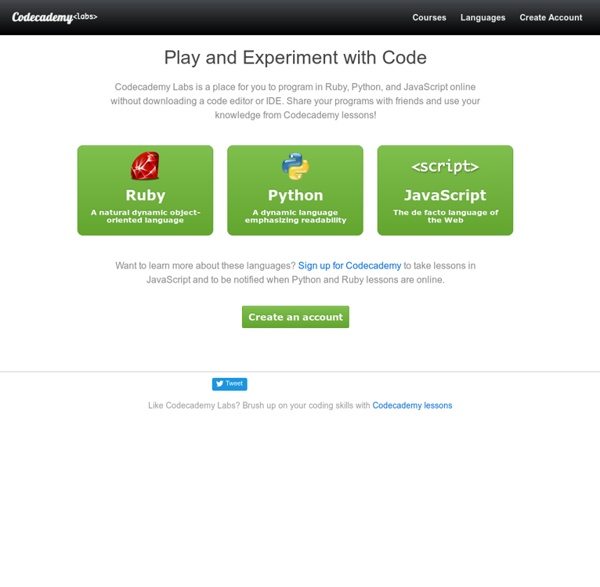 Codecademy Labs is a place for you to program in Ruby, Python, and JavaScript online without downloading a code editor or IDE. Share your programs with friends and use your knowledge from Codecademy lessons! Want to learn more about these languages? Sign up for Codecademy to take lessons in JavaScript and to be notified when Python and Ruby lessons are online. Create an account Click on a code snippet to copy it into your code editor

Tutorials Learn HTML This HTML Tutorial will give you an easy, yet thorough and correct introduction on how to make websites. The tutorial starts from scratch and requires absolutely no prior knowledge of programming. 50 Places You Can Learn to Code (for Free) Online If you’re curious about learning a programming language then you’re in luck: there’s no shortage of resources for learning how to code online. University-level courses, tutorials, cheat sheets, and coding communities all offer excellent ways to pick up a new language, and maybe even a new job, too. Read on, and you’ll discover 50 great places to learn how to code, for free, online. University Many big names in education including MIT and Stanford offer programming courses, absolutely free.

Code Wars Just as the Japanese, Spanish and French languages are uniquely different, programming languages also have their variations, some more popular and easier to use than others. With the recent introduction of some new ones, there is a ‘war’ of modern day languages. What’s easier and faster to use is not always the best option. Five simple database design tips A flawed database can affect all areas of your application, so getting the design right is of paramount importance. Check out Builder's five simple design tips, and share some of your own. If an enterprise’s data is its lifeblood, then the database design can be the most important part of an application. Volumes have been written on this topic, and entire college degrees have been built around it. However, as has been said time and time again here on Builder.com, there’s no teacher like experience.

Gaming News: Student arrested for making a map of his school A Chinese student was removed from Clements High School in Fort Bend, Texas after parents complained he had re-created the school grounds in a game and uploaded the map for his friends to play. The boy was placed in the district’s alternate education school and later arrested, as the police considered him a “t erroristic threat”. “They arrested him, Chen said of FBISD police, and also went to the house to search”.The Lin family consented to the search, and a hammer was found in the boy’s room, which he used to fix his bed, because it wasn’t in good shape, Chen said. He indicated police seized the hammer as a potential weapon. The Chinese community and the boy’s mother have rallied behind him, saying the school has acted too harshly in the wake of the Virginia Tech shoot ings.

Bulletproofing Your Firefox For Web Design Let’s assume that you have a brand new computer and you want to dedicate your time creating web sites and web applications. There are a lot of applications that will be important for your daily tasks, but none as important as Firefox. You can even make your Firefox so powerful that you will need just a couple of applications and you’re done. We will start by saying KUDOS to all web developers that are constantly creating mind blowing Firefox plugins.

13 Sites to Download Free eBooks eBooks have become very popular with devices such as the Kindle and the new iPad. You can get applications for your smart phone to read PDF files and eBooks from most popular book sites. There ia a large choice of eBooks and many are free. Amazon has a collection of free eBooks for their Kindle reader so be sure and check their site. You don’t have to buy a Kindle to read them. They have applications you can download for your computer, iPhone and certain smart phones that are free.

Colors Abstract CSS (Cascading Style Sheets) is a language for describing the rendering of HTML and XML documents on screen, on paper, in speech, etc. It uses color-related properties and values to color the text, backgrounds, borders, and other parts of elements in a document. Ten Common Database Design Mistakes No list of mistakes is ever going to be exhaustive. People (myself included) do a lot of really stupid things, at times, in the name of “getting it done.” This list simply reflects the database design mistakes that are currently on my mind, or in some cases, constantly on my mind. I have done this topic two times before. If you’re interested in hearing the podcast version, visit Greg Low’s super-excellent SQL Down Under. I also presented a boiled down, ten-minute version at PASS for the Simple-Talk booth.

Heaven Is a Waterslide Photo by Annie M.V. Nguyen Suoi Tien, in Ho Chi Minh City, Vietnam, is the first and only Buddhist amusement park in the world. For around $2.40, you can experience Buddhist philosophy in ride form. Nirvana is represented by giant waterslides emerging from the beards of 12-storey-high faces, each plunging into swimming pools decorated with dragons. Awesome CSS3 generators to simplify front end development CSS3 Generator This generator is definitely one of my favorites, as it allow you to generate more than 10 different CSS3 effects, such as border radius, text shadows, transitions, and more. Visit css3generator.com CSS Gradient generator CSS gradients are cool, but it’s also a bit tricky to remind all the possibilities.

How to set a TV up by eye Let's say you're at your father-in-law's house and he just got a new TV. You're stuck in a corner, having recommended the TV, and you're the only person who knows contrast from composite. What to do? In an ideal world you'd have a setup disc on hand to set it up for him. Better yet, you'd have the number of a local calibrator instantly available and pop-in-law is willing to spring for a full calibration .