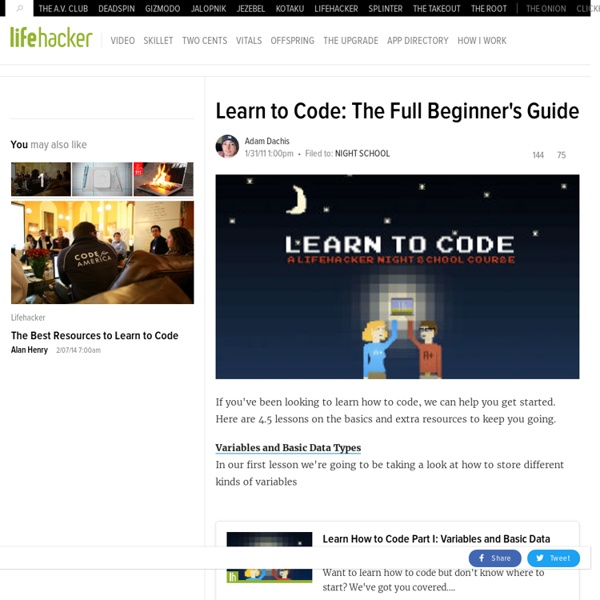 jQuery: The Write Less, Do More, JavaScript Library How to brand yourself using social media [video] Mari Smith, social media expert and author of Facebook Marketing: An Hour a Day, chats with Michael Stalzner of Social Media Examiner about cultivating the brand of you. In the information-packed six minute interview, Mari discusses, amongst other handy things: why branding yourself is important, how to start branding yourself within the social media sphere, and the importance of using your name in social media endeavors. Watch and learn. Full story at Social Media Examiner. More helpful social media resources. YouTube Playlists for Learning Programming YouTube has been very good platform for learning any thing. Earlier you have seen 400+ courses on YouTube and 130+ NPTEL courses. There are few more courses especially about computer programming. thenewboston: thenewboston is a great youtube channel, has more than 2o playlists covering topics Python, C, Java, iPhone development and web programming like HTML, CSS, PHP. Xoax.net Xoax has more than 200 videos but mainly focuses on C++. PHPacademy As the name suggests, it focuses mainly on PHP and some on MySql. There are more videos on small projects like writing your own search engine for your database, pagination, creating a rating system etc… Related posts: Get more stuff like this

Java Practices -&gt; Implementing equals Sometimes the default implementation of equals has the desired behaviour (as in a type-safe enumeration, for example), but equals should usually compare state, not identity. This is particularly true for "data-centric" classes which map to database records. hashCode and equals are closely related: If you extend a concrete class, and add a new field which contributes to equals, then it's not possible to write a perfectly correct equals method for the new class. Instead, you should use composition instead of inheritance. (See Effective Java by Joshua Bloch for more information.) When implementing equals, fields are compared differently, according to their type: In an equals method, it's usually worthwhile to order field comparisons such that the most significant comparisons are performed first. Example 1 The above policies can be collected in a utility class: Car is a class which uses EqualsUtil to implement its equals method: Example 2 Items to note regarding this equals method:

evil week - Lifehacker The Rails Way (9780321445612): Obie Fernandez 50 Body Language Secrets You Need to Succeed in Life April 29th, 2010 A professor from UCLA performed a study that indicates 55% of communication comes from body language and only 7% from the words we use. In light of this study, it makes sense for anyone, whether a student just starting out in life or a seasoned business professional, to pay attention to what their body language is telling others as well as learning to read non-verbal cues from others. The following 50 body language secrets will provide you with tips you can use in job interviews, boosting your career, enhancing your social life, learning how to read other people’s body language, and what you should not do when it comes to body language. Job Interview Pay attention to your body language using these tips to ensure you are giving the best impression during a job interview. Handshake. Business and Career What you say with your body language can convey as much to your business colleagues as your words. Relax your shoulders. Relationships and Dating Reading Body Language

WAY OUT OF THE BOX zifty.d9 99.10.08 WAY OUT OF THE BOX Theodor Holm Nelson Keio University and University of Southampton ============================================ Computer people don't understand computers. Oh, they understand the technicalities all right, but they don't understand the possibilities. Most of all, they don't understand that the computer world is entirely built out of artificial, arbitrary constructs. Word processing, spreadsheet, database aren't fundamental, they're just different ideas that different guys have whomped up, ideas that could be totally different in their structure. ccan Who are Anonymous? And what do they want? | thinq_ As the war of WikiLeaks gains a second front in cyberspace, governments, media outlets and businesses around the world are struggling to understand just who or what their adversary, Anonymous, is - and what it hopes to achieve. And obligingly, today, the self-styled "Internet gathering" of individuals bent on defending their vision of free speech online, issued a press release in an attempt to clarify the issue - though it raises as many questions as it answers. In the statement, Anonymous denied any kind of formal structure, explaining that its name is applied to a shifting roster of individuals who come together on an ad hoc basis, depending on individual concerns and practical, day-to-day matter such as who happens to be online at the time. This, the press release says, explains reports of a rift that has emerged from among Anonymous's ranks in the last two days. The 'gathering' had explained its loosely-defined nature in an earlier manifesto, released on Thursday.

Agile Web Development with Rails About this Book 792 pages Published: Release: P7.0 (2010-09-14) ISBN: 978-1-93435-616-6 This edition covers Rails 2.x. For Rails 3.2, please see the Rails 3.2 For Rails 4.0, please go here Rails 4.0 Rails swept to world-wide attention in the Spring of 2005. You want to write professional-grade applications: Rails is a full-stack, open-source web framework, with integrated support for unit, functional, and integration testing. But Rails is more than a set of best practices. With this book, you’ll learn how to use ActiveRecord to connect business objects and database tables. As with the previous editions of the book, we start with an extended tutorial that builds parts of an online store.