Honey On Tap From Your Own Beehive - Flow™ Hive Home. Tabletopia - The digital platform for board games by Tabletopia. Tabletopia. Balsamiq Mockups - Balsamiq. Take a second. Let it sink in. The first impression might be disorienting. There are very few interface elements on the screen. Start exploring however, and you'll find out that Mockups is filled with powerful yet only-visible-when-you-need-them features. Getting your ideas out should be effortless. Our sweet spot: the ideation phase Mockups really shines during the early stages of designing a new interface. Mockups is zenware, meaning that it will help you get "in the zone", and stay there.

Mockups offers the same speed and rough feel as sketching with pencil, with the advantage of the digital medium: drag & drop to resize and rearrange elements, make changes without starting over, and your work is clear enough that you'll make sense of them later. See what you can build with Mockups Download the samples above, or find more on Mockups To Go, our community-contributed stencils site. Designed for collaboration Your whole team can come together around the right design using Mockups. Mou - Markdown editor for developers, on Mac OS X. Download Mou 0.8.7 beta, requires OS X 10.7+ / Yosemite Ready Preorder Mou 1.0 with 50% discount! 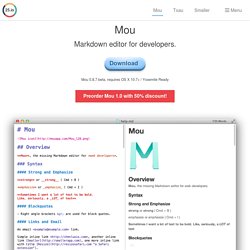 The Ultimate Guide to Writing & Publishing with Markdown. It’s no secret that we’re big fans of Markdown at Ghost. 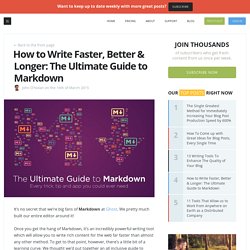 We pretty much built our entire editor around it! Once you get the hang of Markdown, it’s an incredibly powerful writing tool which will allow you to write rich content for the web far faster than almost any other method. To get to that point, however, there’s a little bit of a learning curve. We thought we’d put together an all inclusive guide to make that curve a little bit shorter, and potentially teach you a few super-user tricks to Markdown that you might not have known. What is Markdown Markdown is a plain text formatting syntax for writers. Back in 2004, Apple pundit John Gruber came up with the idea after becoming frustrated by writing long, laborious HTML tags to properly format his content. Here’s a quick example of Markdown in action: The *quick* brown fox, jumped **over** the lazy [dog]( becomes The quick brown fox, jumped over the lazy dog. Why do Writers Love Markdown so Much? “Is that it?” Very true! Ok! Headings Text Images. Mousechief. Ulysses. Announcing NGINX Plus Release 6 with Enhanced Load Balancing, High Availability, and Monitoring Features.

We’re really pleased to announce the availability of NGINX Plus Release 6 (R6). 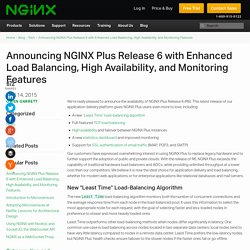 This latest release of our application delivery platform gives NGINX Plus users even more to love, including: A new “Least Time” load-balancing algorithmFull-featured TCP load balancingHigh availability and failover between NGINX Plus instancesA new statistics dashboard and improved monitoringSupport for SSL authentication of email traffic (IMAP, POP3, and SMTP) Our customers have expressed overwhelming interest in using NGINX Plus to replace legacy hardware and to further support the adoption of public and private clouds. With the release of R6, NGINX Plus exceeds the capability of traditional hardware load balancers and ADCs, while providing unlimited throughput at a lower cost than our competitors. We believe it is now the ideal choice for application delivery and load balancing, whether for modern web applications or for enterprise applications like relational databases and mail servers. 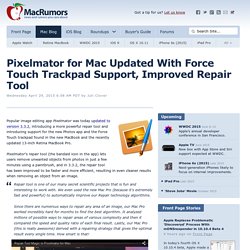 Pixelmator's repair tool (the bandaid icon in the app) lets users remove unwanted objects from photos in just a few minutes using a paintbrush, and in 3.3.2, the repair tool has been improved to be faster and more efficient, resulting in even cleaner results when removing an object from an image. Repair tool is one of our many secret scientific projects that is fun and interesting to work with. We even used the new Mac Pro (because it's extremely fast and powerful) to automatically improve our Repair technology algorithms.

Since there are numerous ways to repair any area of an image, our Mac Pro worked incredibly hard for months to find the best algorithm. Try Pixelmator. Glide - Beautifully Simple, Professional App Creation by Chris Harris. Glide Creations Ltd. The Grid.