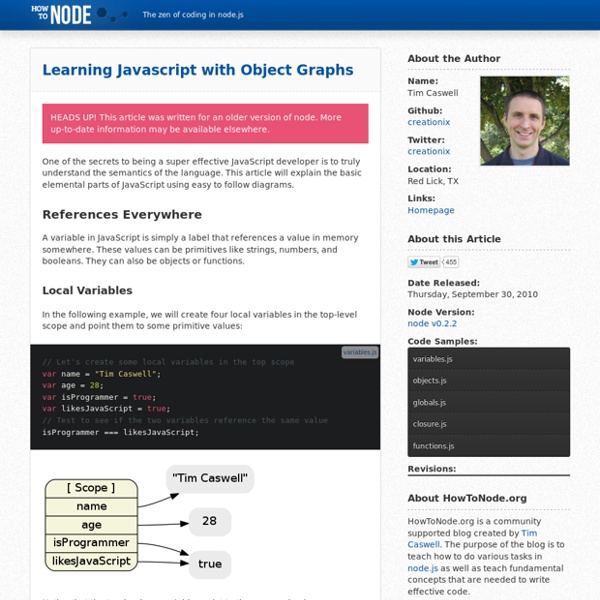 HEADS UP! This article was written for an older version of node. More up-to-date information may be available elsewhere. One of the secrets to being a super effective JavaScript developer is to truly understand the semantics of the language. References Everywhere A variable in JavaScript is simply a label that references a value in memory somewhere. Local Variables In the following example, we will create four local variables in the top-level scope and point them to some primitive values: variables.js // Let's create some local variables in the top scopevar name = "Tim Caswell";var age = 28;var isProgrammer = true;var likesJavaScript = true;// Test to see if the two variables reference the same valueisProgrammer === likesJavaScript; Notice that the two boolean variables point to the same value in memory. In the code snippet we checked to see if the two references pointed to the same value using === and the result was true. The outer box represents the outermost closure scope. objects.js Related:  averroesfr

HTML Tutorial CSS Sprites: Image Slicing’s Kiss of Death Back when video games were still fun (we’re talking about the 8-bit glory days here), graphics were a much simpler matter by necessity. Bitmapped 2-dimensional character data and background scenery was individually drawn, much like today’s resurgent pixel art. Hundreds and later thousands of small graphics called sprites were the building blocks for all things visual in a game. Article Continues Below As game complexity increased, techniques developed to manage the multitude of sprites while keeping game play flowing. And what does this have to do with the web? Everything old is new again, and though the rise of 3D games has made sprite maps obsolete, the concurrent rise of mobile devices with 2D gaming capabilities have brought them back into vogue. Specifically, we’re going to replace old-school image slicing and dicing (and the necessary JavaScript) with a CSS solution. How do CSS Sprites work? Let’s start with the master image itself. On to the HTML. Applying the CSS#applyingcss

Online Python Tutor - Learn programming by visualizing code execution The New Boston » Java A true story about survival in the Adirondack Mountains. The park covers 6.1 million acres, a land area greater than Vermont, or than Yellowstone, Yosemite, Grand Canyon, Glacier, and Great Smoky Mountains National Parks combined. The Adirondacks are also home to thousands of black bears, deadly snakes, and countless other dangers. Abandoned in the middle of the park with no survival experience and very few supplies, the entire journey was documented and filmed. Click here to watch the whole series! Welcome to thenewboston, the ultimate source for free video tutorials on the internet! There is also a new and improved thenewboston Official Forum. If you are ever on YouTube, make sure to check out my channel at Feel free to donate to help support thenewboston. I hope you all enjoy the website, and thank you to everyone for all of your support!

Learning Javascript with Object Graphs (Part III) Static Version Part I of this series explained basic object graphs and visually described references, closures, and basic inheritance in JavaScript. Part II compared different styles for doing object-oriented programming in JavaScript. Now in Part III we'll get creative and look as Ruby's object model and compare it to how JavaScript works. Also I'll show how to implement some Ruby style classes. Why Ruby Ok, I'll admit, I used to be a ruby guy. Also I chose ruby because I've noticed that several newcomers to the node.js community come from ruby and other languages with similar object systems. What are Objects Both languages are object oriented languages. Methods versus Functions Probably the biggest difference between the object models when you get down to it and ignore syntax is the fact that Ruby has methods and JavaScript has first-class functions. Gotta keep them separated In classical OO, there is this idea that you must separate function from state. Controlled Inheritance A String Ruby

Using the memcached telnet interface This is a short summary of everything important that helps to inspect a running memcached instance. You need to know that memcached requires you to connect to it via telnet. The following post describes the usage of this interface. How To Connect Use "ps -ef" to find out which IP and port was passed when memcached was started and use the same with telnet to connect to memcache. Example: telnet 10.0.0.2 11211 Supported Commands The supported commands (the official ones and some unofficial) are documented in the doc/protocol.txt document. Sadly the syntax description isn't really clear and a simple help command listing the existing commands would be much better. Traffic Statistics You can query the current traffic statistics using the command stats You will get a listing which serves the number of connections, bytes in/out and much more. Example Output: Memory Statistics You can query the current memory statistics using stats slabs Which Keys Are Used? stats items Never Set a Timeout > 30 Days!

The Ultimate Guide to WordPress Multisite We’ve been developing plugins for it since the old days when it was WordPress MU, and we use it to power Edublogs, a huge network of blogs for educators and students. Personally I also use Multisite a lot. I use it to host client websites, to create sites demonstrating techniques I outline in my books and tutorials, and to keep everything in one place. In this guide to Multisite I’m going to show you everything you need to know to get started with Multisite and create your own network of blogs or sites. I’ll cover: What is Multisite and how is it different from regular WordPress? But first, let’s get some terminology straight. Network refers to the entire Multisite network, i.e. your WordPress installationSite refers to one of the blogs or sites created as part of the network. So when I refer to your site, I don’t mean your whole network of sites, but just one of the sites on it. So now we’ve got that sorted, let’s take a look at Multisite! What is Multisite? Uses for Multisite Creating a Site

Why use "closure"? Static Version One of the greatest features of the JavaScript language is closure. I've discussed this concept some in the "What is This?" What is a closure Again from wikipedia: In computer science, a closure is a first-class function with free variables that are bound in the lexical environment. Or the way I understand it intuitively: A closure is a function defined within another scope that has access to all the variables within the outer scope. Using closure to hide state Imagine this piece of code: greet_plain.js function greet(message) { console.log(message);} function greeter(name, age) { return name + ", who is " + age + " years old, says hi!" // Generate the messagevar message = greeter("Bob", 47); // Pass it explicitly to greetgreet(message); Output Bob, who is 47 years old, says hi! We're manually passing the internal state around so that the other functions can get ahold of it. Clearly there must be a better way. greeter.js return function greet() { console.log(message); };} personclass.js

Get To Know Linux: The /etc/init.d Directory If you use Linux you most likely have heard of the init.d directory. But what exactly does this directory do? It ultimately does one thing but it does that one thing for your entire system, so init.d is very important. The init.d directory contains a number of start/stop scripts for various services on your system. Everything from acpid to x11-common is controlled from this directory. Of course it's not exactly that simple. If you look at the /etc directory you will find directories that are in the form rc#.d (Where # is a number reflects a specific initialization level - from 0 to 6). Now if you are using a distribution like Fedora you might find this directory in /etc/rc.d/init.d. In order to control any of the scripts in init.d manually you have to have root (or sudo) access. /etc/init.d/command OPTION Where command is the actual command to run and OPTION can be one of the following: startstopreloadrestartforce-reload Most often you will use either start, stop, or restart.

Collecting all the cheat sheets