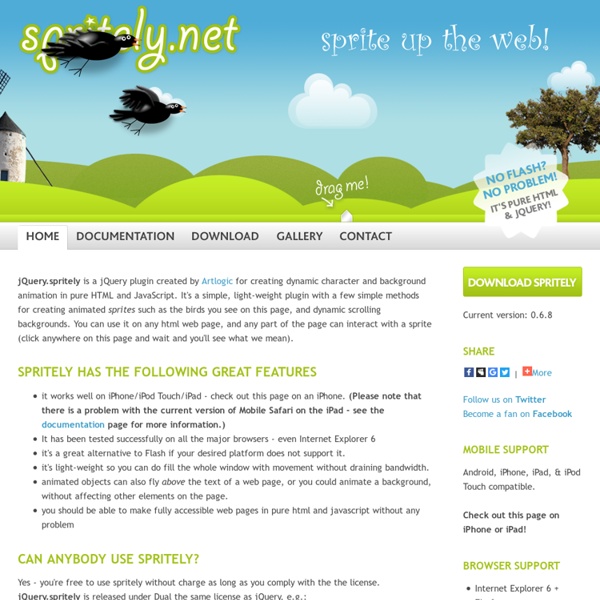 jQuery.spritely is a jQuery plugin created by Artlogic for creating dynamic character and background animation in pure HTML and JavaScript. It's a simple, light-weight plugin with a few simple methods for creating animated sprites such as the birds you see on this page, and dynamic scrolling backgrounds. Hello! You can use it on any html web page, and any part of the page can interact with a sprite (click anywhere on this page and wait and you'll see what we mean). Spritely has the following great advantages it works well on iPhone/iPod Touch/iPad - check out this page on an iPhone.

Vertical Scroll Menu with jQuery Tutorial Introduction Just last week, I came accross to this website Narrow Design. His scroll menu caught a lot of my attentions, I played with it for a while. Yes, unfortunately, it's built in flash. And, Yes, we are going to implement it with jquery - javascript based scroll menu that will do the same thing. NVU List of Accredited Registrars » auDA auDA Foundation Established in 2005, the auDA Foundation makes annual grants to promote and encourage education and research initiatives that will enhance the utility of the Internet for the benefit of the Australian community ANZIAs The ANZIAs are an annual event celebrating the achievements of organisations, businesses and individuals that have made significant contributions to the development and use of the Internet in Australia and New Zealand.

60 Amazing jQuery Sliders, Carousels and Other jQuery Image Plugins Creative Can This is one of the largest and most up to date collections of jQuery slider plugins. I’m sure you will find some of them useful for adding cool slider effects to your web pages. It is more and more common to see jQuery slider plugins used for image slideshows, carousels and for creating html slider effects on websites. It is a really great solution for showcasing sequential images or featured articles without taking up too much space. To have a jQuery banner, content slider, carousel, gallery or any image presentation system on your web page, you certainly have the option to code it from scratch.

Internet Archive: Digital Library of Free Books, Movies, Music & Wayback Machine Home » auDA Creating the iPhone unlock screen using xHTML, CSS and jQuery The iPhone: Everybody knows what it is, many people "played around" with the gadget and most people love it. I also own one of these amazing smartphones, and the looks of the software is really, really sleek and innovative (Just like we're used from Apple). I wanted to transfer (some) of these amazing designs to a webpage to re-create the same look and feel for webbrowsers. CSS Zen Garden: The Beauty of CSS Design How To Build A Site That Works Like Pinterest Ok, if you have no idea what Pinterest is then go check it out. It is a website that lets you organise and share all your favourite things by using pinboards. It really is a cool site, but what I find interesting is how these pinboards are laid out. I've seen something similar before with jQuery Isotope where blocks are perfectly positioned into a series of columns, and as the screen size changes, the columns re-shuffle to make sure they fit inside the screen. So the purpose of this tutorial is to re-create this responsive block effect ourselves...

Create Magical Layouts With Isotope, A Great jQuery Plugin Isotope is an exquisite jQuery plugin for magical layouts that can readjustment themselves depending on the browsers dimensions. Along with filtering and sorting functionality, this is a truly powerful plugin. I came across the plugin whilst developing a project that required blocks of various heights to fit perfectly in the page. 85 Awesome jQuery Slider Plugins Slider are very useful and increasingly popular web page elements used for highlighting important content. By using a jQuery slider plugin, one can create amazing HTML slider effects with fancy animations of content elements like text and images. jQuery takes care of the difficult aspects like browser support and typically when using jQuery plugins it can be done with very little coding effort. This is the reason why jQuery sliders and jQuery banner slideshow scripts have become very popular on most types of websites. They are are typically used to feature multiple products, news, video etc. without taking up a lot of space on the pages.

Rama - Slider Check out all examples 1. Example Follow Button Updated on Fri, 2014-02-07 13:58 The Follow Button is a small widget which allows users to easily follow a Twitter account from any webpage. The Follow Button uses the same implementation model as the Tweet Button, and its integration is just as simple. By using the Follow Button, you agree to the Developer Rules of the Road. Overview This documentation page is for developers and users who wish to build their own Follow Buttons.

10 awesome jQuery snippets Preloading images Preloading images is useful: Instead of loading an image when the user request it, we preload them in the background so they are ready to be displayed. Doing so in jQuery is very simple, as shown below: (function($) { var cache = []; // Arguments are image paths relative to the current page. $.preLoadImages = function() { var args_len = arguments.length; for (var i = args_len; i--;) { var cacheImage = document.createElement('img'); cacheImage.src = arguments[i]; cache.push(cacheImage); } } jQuery.preLoadImages("image1.gif", "/path/to/image2.png");