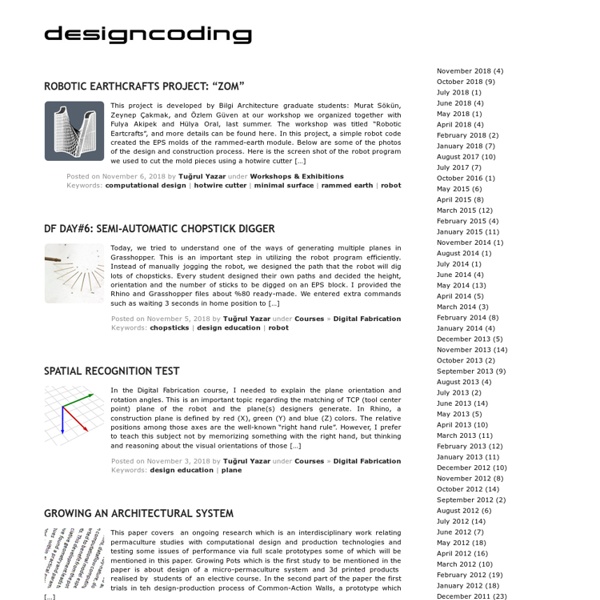 Here is the winner of this year’s mid-term jury competition in first year Basic Design studio of İstanbul Bilgi University. We asked students to construct a contouring structure within 8m3 volume. After several clay and foamboard prototypes, this group studied 3d laser scanning to digitize the clay model, then finally they used leap motion gadget to simulate the hand-made clay forming in computer. Other student projects will follow this post, as there were several other interesting approaches in this jury. Students: Selim Buldu, Lachyn Tuliyeva, Neda Khorshidi, Serhan Koçbasan, Sevgi […] Together with Fulya Akipek and Mehmet Ali Altın, we’re conducting a 4 day workshop in Anadolu University, Eskişehir, between 1 and 4th of May.

Triangle Tessellation with OpenGL 4.0 at The Little Grasshopper This is the first of a two-part article on tessellation shaders with OpenGL 4.0+. This entry gives an overview of tessellation and walks through an example of simple triangle subdivision; in the next entry, we’ll focus on quad subdivision. Reviewing Geometry Shaders When Geometry Shaders (GS) first came out, we were all excited because we could finally write a shader that could “see” all the verts in a triangle at once. And finally, the GPU could produce more primitives than it consumed. **SOFTlab We are working on an installation called CHROMAtex that is set to open at the Bridge Gallery on August 26th. The piece is comprised of over 4400 separate colorful panels. It is being made possible by all of our kind and generous friends who have donated to our Kickstarter page…

The Octahedron by LMNts (Allimages from LMNNts) The Octahedron is an experimental pavilion created by Seattle based studio LMNTechStudio, The pavillion consisting of over 2000 parts was created to be exposed at the 2013 Seattle Design Festival. Project Description The pavilion is clad with over 400 triangular MDF panels held in place with either friction or trapped due to assembly sequencing.

Scientific Publications Geometric Multi-Covering.R. Strauss, F. Isvoranu, G. Solar Analysis including Occlusion I’ve worked a little more about the Solar Position definition i’ve started here. The definition uses Danel da Rocha’s beautiful solar position script and utilizes it with other components. It creates visual output for any given surface, divided into quads (with side faces of course) and coloring them according to their orientation to the sun.

Programming 3D Applications with HTML5 and WebGL In this chapter we will tour the extensive set of features Three.js provides for drawing graphics and rendering scenes. If you are new to 3D programming, don’t expect to comprehend all of the topics in this chapter right away. But if you take them one at a time and work through the code samples, you could be well on your way to building great WebGL sites using the power of Three.js. Three.js has a rich 3D graphics system, inspired by many 3D libraries that have come before, and informed by the collective experience of its authors. Three.js provides of the features one comes to expect from 3D libraries, and then some: 2D and 3D geometry built from polygonal meshes; a scene graph with hierarchal objects and transformations; materials, textures and lights; real-time shadows; user-defined programmable shaders; and a flexible rendering system that enables multi-pass and deferred techniques for advanced special effects.

Architecture In this tutorial you will learn how can you create shell-like surfaces made of planar hexagons using Kangaroo´s Planrization Forces. CHROMAtex.me is an installationby SOFTlab for the bridgegallery ,the project was funded by offering a small ownership of the installation in exchange for a small donation. Continuing with the experimentation and research of the honeycomb morphologies and as a example for a Workshop I gave recently I . . . Weave Anything: Sphere packing, circle packing, and kagome weaving Any triangulation of a surface directs a kagome weaving. Some of the prettiest triangulations result from sphere packings or circle packings (which are nearly the same thing.) A circle packing is a configuration of circles having specified patterns of tangencies. Adding the condition that circle interiors may not overlap, such a circle packing can be called a packing of discs. A disc packing on the plane is associated with a plane graph, called its carrier, that has a vertex at each circle center and an edge connecting the vertices of any two circles that are tangent to each other. A packing of discs is called compact if its carrier is a triangulation.

Inorganic Speciation Inorganic Speciation by Iain Maxwell + Dave Pigram (supermanoueuvre) Form is the primary instrument through which architecture engages with the world. It is this firmly held position that motivates supermanoeuvre to develop custom methodologies of formation that allow for the explicit and open-ended negotiation between multiple architectural intentions and the complex milieux within which they will operate. These methodologies are algorithmic in nature, primarily digitally enacted, and extend the capacities of the form-finding tradition within architecture through a decoupling of its processes from the limits of physics, enabling a broader examination of the number and nature of negotiable inputs. The abstract notation underlying these algorithms enables a meta-analysis of the formational processes, which has an accelerating influence on their evolution, as experienced within other fields of intellectual and artistic endeavour.

half-edge mesh Straight Skeleton (imperfect) Posted by trevor.patt on 04/03/2013 · Leave a Comment Straight Skeleton from HEM faces Inspired by a comment, this morning I played around with the idea of composing straight skeletons for the faces generated by the Half-Edge Mesh Definition posted earlier. A polygon’s straight skeleton resembles the voronoi skeleton or medial axis, but is composed of only straight segments (and typically fewer of them, … Continue reading HEM functions