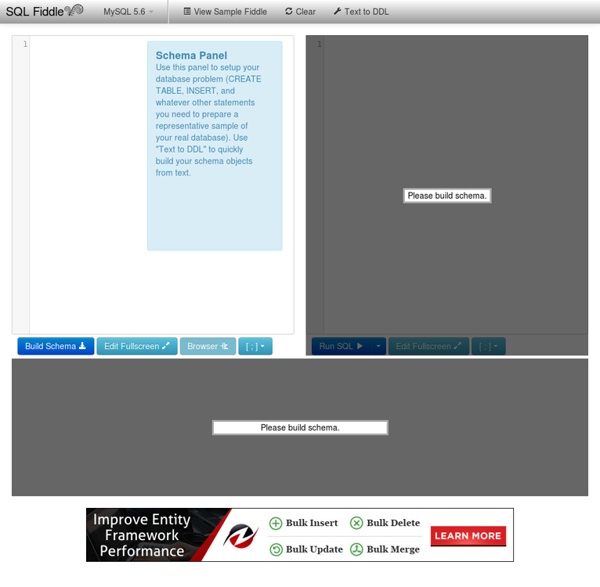 SQLZOO Learn SQL using: SQL Server, Oracle, MySQL, DB2, and PostgreSQL. Reference: how to... How to read the data from a database. 2 CREATE and DROP How to create tables, indexes, views and other things. Select a Language Help What is repl.it? It is an online environment for interactively exploring programming languages. The name comes from the read-eval-print loop, the interactive toplevel used by languages like Lisp and Python. How do I start? Once you have selected a language, start by typing an expression into the console on the right side of the screen and pressing Enter. Readability Update: On February 1, 2011, Readability was re-launched into a full-fledged reading platform that includes mobile support, queuing articles for reading later and a greatly improved reading view. In addition, the platform provides a unique model for supporting publishers and writers through your reading activity. Visit to learn more.

App Inventor Get Started Follow these simple steps to build your first app. Tutorials Step-by-step guides show you how to build all kinds of apps. Teach WebIDE - Firefox Developer Tools WebIDE enables you to create, edit, run, and debug web apps using the Firefox OS Simulator or a real Firefox OS device. It also enables you to connect the Firefox Developer Tools to a number of other browsers, including Firefox for Android, Chrome on Android, and Safari on iOS. See the Remote Debugging page for instructions on how to connect to a specific browser. With WebIDE, you first set up one or more runtimes. A runtime is an environment in which you'll run and debug the app.

61 Best Social Media Tools for Small Business Banana Republic and Susan’s Neighborhood Shirt Shop could be using the same social networks—Twitter, Facebook, Google+, etc.—but their marketing plans and their marketing tools are likely quite different. Enterprise solutions are great for the big guys, but the rest of us are in the market for something more our size. Small businesses are eager to find valuable tools that take a lot of the time and trouble out of social media marketing and that do so without costing an arm and a leg. I think we’d all want tools like that, right? Well, I went searching for just this kind of simple, easy, cost-effective tool, and I came up with 61 that made the cut.

Splunk For Application Development, DevOps and APM Splunk® software allows you to quickly identify and pinpoint code-level issues at any stage of the development and release process. Only Splunk enables you to: Find and fix bugs quickly so you can ship product fasterGain insights into application usage and user behaviorGet real time, mission-critical visibility into every step, system and process involved in building, testing and shipping new products to your customers Download Splunk for free. You'll get a Splunk license for 60 days and can index up to 500 megabytes of data per day. A First Vim Tutorial I've started using vim again. I thought I would post some of my vim notes. I generally use vim 50% in the terminal, and now 50% as Cream (UPDATE: After learning more Vim commands I switched from Cream to regular Gvim). Cream is a version of gvim that makes using vim really easy. If you want an easy introduction to vim, try Cream first. Vim has a reputation as being difficult to use.

Introducing HyperDev by Joel Spolsky Tuesday, May 31, 2016 One more thing… It’s been awhile since we launched a whole new product at Fog Creek Software (the last one was Trello, and that’s doing pretty well). Today we’re announcing the public beta of HyperDev, a developer playground for building full-stack web-apps fast. Kdenlive tutorial - color correction suite Good photography doesn't just happen. Careful attention to lens settings, depth-of-field charts, and lighting will produce quality images but even those, since the days of the earliest photography, have been taken into the darkroom and adjusted. Read the other parts in this series: Part 1: Introduction to Kdenlive Part 2: Advanced editing technique Part 3: Effects and transitions Part 5: All about audioPart 6: Workflow and conclusion Kdenlive's color correction suite easily rivals any professional video editing application and in many ways surpasses the basic tools often found in the expensive industry application. Let's look at the typical workflow of color correction, and then the tools.

ALM Rangers - Implementing Static Code Analysis with StyleCop How often have you encountered code that’s incomprehensible? Usually, it’s inconsistent formatting, invalid comments and lack of naming conventions that make code unreadable. Such inconsistencies are often overlooked as petty anomalies, but they can make a big difference in the overall maintainability of code. StyleCop is a great tool to maintain style and format consistency in your source code.