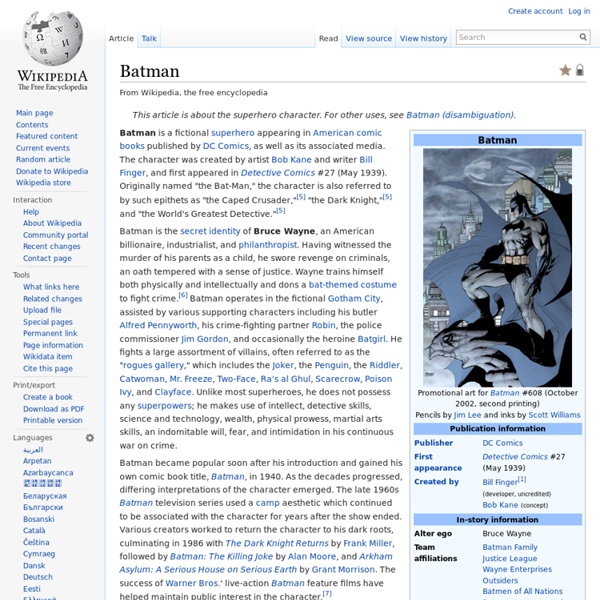 Batman is a fictional superhero appearing in American comic books published by DC Comics, as well as its associated media. The character was created by artist Bob Kane and writer Bill Finger, and first appeared in Detective Comics #27 (May 1939). Originally named "the Bat-Man," the character is also referred to by such epithets as "the Caped Crusader,"[5] "the Dark Knight,"[5] and "the World's Greatest Detective Publication history Creation In early 1939, the success of Superman in Action Comics prompted editors at the comic book division of National Publications (the future DC Comics) to request more superheroes for its titles. Finger offered such suggestions as giving the character a cowl instead of a simple domino mask, a cape instead of wings, and gloves, and removing the red sections from the original costume.[12][13][14][15] Finger said he devised the name Bruce Wayne for the character's secret identity: "Bruce Wayne's first name came from Robert Bruce, the Scottish patriot. Costume

Batman: Arkham Asylum (Video Game 2009 DC Database Batman is the super-hero protector of Gotham City, a man dressed like a bat who fights against evil and strikes terror into the hearts of criminals everywhere. In his secret identity, he assumes the alias of Real Name Status Characteristics Origin Sometimes, I admit, I think of Bruce as a man in a costume. Origins Early Life Training Bruce Wayne swore an oath to rid the city of the evil that had taken his parents' lives. Batman Begins Bruce Wayne returned to Gotham City after many years of study and training with his body and mind developed to perfection. Rogues Gallery The Long Halloween Justice League Origins Robin

Nolan drops some major spoilers about just when The Dark Knight Rises takes place Is there anything ruling out that most of the spoiler images we have seen so far are for the 8 minute prologue scene only? I’m excluding the hot cat woman images and interior Bane vs Batman fight, where batman’s exhaustion would hint at an 8 year older man closer to his 40’s. Christopher Nolan could have let a lot of set images leak for this reason. He could have tightened down leaking images, it was done for I Am Legend, IIRC there were no images leaked of completely empty overgrown NYC avenues. Also, it would sound like a plausible prologue… The prologue is not set 8 years in the future.

Lego Batman: The Videogame (Video Game 2008 Biography &WATCHMEN&: THE CURIOUS CASE OF A GRAPHIC NOVEL "Returning to men in tights after a 15-year world-literature binge, I was almost overwhelmed by Alan Moore's 'Watchmen'," writes Garth Risk Hallberg. He's startled by the comic's complexity, but stumbles over the term "graphic novel" ... Special to MORE INTELLIGENT LIFE If fiction can be likened to a high–a “vivid, continuous dream,” as John Gardner put it–comic books were my gateway drug. A limited series called "Watchmen", written by Moore and drawn by Dave Gibbons, had appeared five years earlier, and had subsequently been collected in a one-volume “graphic novel”. Then I turned 14 and Ken Kesey got ahold of me. Then last month, after nine writers, three directors, and a year of post-production legal wrangling, the big-budget film adaptation of "Watchmen" hit theatres. The movie’s sole undisputed accomplishment, then, was to cement the book’s reputation as one of the great novels of our time. Moreover, Moore improvises new narrative equipment. Picture credit: DC Comics

Bob Kane Bob Kane (born Robert Kahn; October 24, 1915 – November 3, 1998) was an American comic book artist and writer, credited along with Bill Finger as the creator of the DC Comics superhero Batman. He was inducted into the comic-book industry's Jack Kirby Hall of Fame in 1994 and into the Will Eisner Comic Book Hall of Fame in 1996. Early life and work[edit] Comics[edit] He entered the comics field two years later, in 1936, freelancing original material to editor Jerry Iger's comic book Wow, What A Magazine! Batman[edit] Detective Comics #27 (May 1939). Bill Finger joined Bob Kane's nascent studio in 1938. ...had an idea for a character called 'Batman', and he'd like me to see the drawings. Finger said he offered such suggestions as giving the character a cowl and scalloped cape instead of wings; adding gloves; leaving the mask's eyeholes blank to connote mystery; and removing the bright red sections of the original costume, suggesting instead a gray-and-black color scheme. Robin[edit] [edit]

How the Batsuit Works" Batman's utility belt is a modified, Wayne Enterprise prototype climbing harness. With an innovative gear-attachment system, Batman can grab and replace anything on the belt quickly and easily. Batman carries a variety of non-lethal deterrents and other field equipment on his belt for crime fighting. The utility belt features: Magnetic grappling gun with monofilament decelerator climbing lineFlexible, fiber-optic periscope (to see around corners)Razor-sharp alloy, shuriken-style throwing stars (hand-ground into the distinctive Batarang shape)Ninja spikes for the hands and feet (used to climb sheer walls)Mini-mines and various non-lethal explosives (used to stun or confuse enemies)A mini cell phone with an encrypted signalMedical kit Though it's not on his belt, one of Batman's most innovative and effective gadgets is the sonic device he carries in the heel of one of his boots. For more information on the Batsuit, Batman and related topics, check out the links on the next page.

Bill Finger Milton "Bill" Finger[1] (February 8, 1914[2] – January 18, 1974[1][3]) was an American comic strip and comic book writer best known as the uncredited co-creator, with Bob Kane, of the DC Comics character Batman, as well as the co-architect of the series' development. Years after Finger's death, Kane acknowledged his contributions. Finger also wrote many of the original 1940s Green Lantern stories and would go on to contribute to the development of numerous comic book series. He was posthumously inducted into the comic book industry's Jack Kirby Hall of Fame in 1994 and the Will Eisner Comic Book Hall of Fame in 1999. Early life and career[edit] Finger graduated from DeWitt Clinton High School in The Bronx in 1933.[6] An aspiring writer and a part-time shoe salesman, he joined Bob Kane's nascent studio in 1938 after having met Kane, a fellow DeWitt Clinton alumnus, at a party;[7] Kane later offered him a job ghost writing the strips Rusty and Clip Carson.[8][9] Batman villains[edit]

10 Really Awesome Calvin And Hobbes Comic Strips December 12, 2011 | 2 Comments » | Topics: Comic, LOL and the last Calvin And Hobbes… Hot Stories From Around The Web Other Awesome Stories Gotham Times: Batman News from Legions of Gotham Mightygodking.com & Post Topic & From The Slushpile I don’t really give a flying rat’s ass about 4e, but what’s the difference between Lawful Good and Good or Chaotic Evil and Evil in 4? Good is a conflation of NG and CG. It doesn’t really matter if you’re just out to help people or if you want to give the finger to the man at every opportunity, you’re commited to helping out other people. Lawful Good is like super-good or almost Paladin good. Evil is essentially Lawful Evil. Chaotic Evil is the same as it ever was but with shades of hardcore Neutral Evil, without the lazy fucks like ogres and gnolls to dilute it. Why do there need to be extreams if they aren’t going to bother filling in the gaps? Stop grinding the axe for a second. Law and Chaos was never well developped. You may resume axe-grinding now. Granted the lines between the Neutrals and Chaotics where always thin. Not just thin, but downright indistinguishable. Reply