Why The China World Order Is Here On Purpose. 5G and The AI Control Grid. Olduvai Theory: Sliding Towards a Post-Industrial Stone Age, by Richard Duncan. Click here Indeed, the ability to control energy, whether it be making wood fires or building power plants, is a prerequisite for civilization. -- Isaac Asimov, 1991 In 1989, I concluded that the life-expectancy of Industrial Civilization is horridly short. 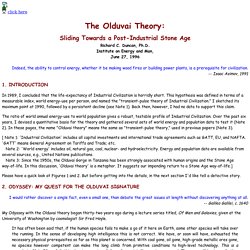 This hypothesis was defined in terms of a measurable index, world energy-use per person, and named the "transient-pulse theory of Industrial Civilization. " I sketched its maximum point at 1990, followed by a persistent decline (see Note 1). Back then, however, I had no data to support this claim. The ratio of world annual energy-use to world population gives a robust, testable profile of Industrial Civilization. . [ Note 1: 'Industrial Civilization' includes all capital investments and international trade agreements such as GATT, EU, and NAFTA. Please have a quick look at Figures 1 and 2. It has often been said that, if the human species fails to make a go of it here on Earth, some other species will take over the running. Eureka! 1. Greece: Sound and Fury Signifying Much.

Obama’s Geopolitical China ‘Pivot’: The Pentagon Targets China. China and the New World Order. The New World Order: Does It All Just Boil Down To A Battle For Your Soul? From its very inception, the Leninist/Marxist ideology of the Soviet Union made it a central priority to dispel and subjugate religious and spiritual expression. 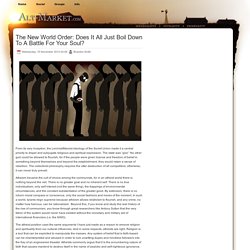 The state was “god.” No other god could be allowed to flourish, for if the people were given license and freedom of belief in something beyond themselves and beyond the establishment, they would retain a sense of rebellion. The Pitchforks are Coming…– A Dire Warning from a Member of the 0.01% If we don’t do something to fix the glaring inequities in this economy, the pitchforks are going to come for us. 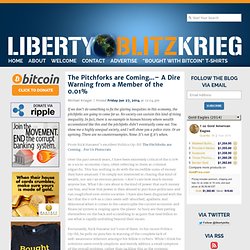 No society can sustain this kind of rising inequality. In fact, there is no example in human history where wealth accumulated like this and the pitchforks didn’t eventually come out. You show me a highly unequal society, and I will show you a police state. Or an uprising. There are no counterexamples. Here’s what I say to you: You’re living in a dream world. Which is why the fundamental law of capitalism must be: If workers have more money, businesses have more customers. Because here’s an odd thing. Most of you probably think that the $15 minimum wage in Seattle is an insane departure from rational policy that puts our economy at great risk. It makes perfect sense if you think about it: If a worker earns $7.25 an hour, which is now the national minimum wage, what proportion of that person’s income do you think ends up in the cash registers of local small businesses?

Where Does the Real Problem Reside? Two Charts Showing the 0.01% vs. the 1% While I always supported the overall message and energy that encompassed the Occupy Wall Street movement, I never backed the slogan of the 1% vs. the 99%. 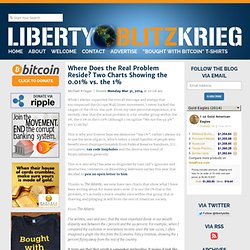 From my own personal experience, it is entirely clear that the actual problem is a far smaller group within the 1%, the 0.1% or the 0.01% (although I recognize “We Are the 99.9%” isn’t catchy). This is why you’ll never hear me demonize “the 1%”, rather I always try to use the term oligarch, which refers a small handful of people who benefit most disproportionately from Federal Reserve handouts, D.C. corruption, tax code loopholes and the destructive trend of financialization generally. This is is also why I became so disgusted by Sam Zell’s ignorant and destructive comments on Bloomberg television earlier this year that decided to pen an open letter to him. Thanks to The Atlantic, we now have two charts that show what I have been writing about for many years now. Brzezinski: The Politically Awakened Masses are a Threat to the NWO. 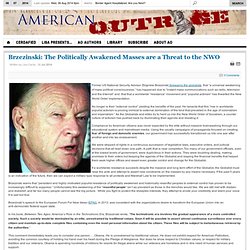 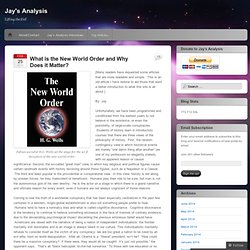 Wells set the stage for the sci fi deception of the new world order. [Many readers have requested some articles that are more readable and simple. This is an old article I have redone to aid those that want a better introduction to what this site is all about.] By: Jay Unfortunately, we have been programmed and conditioned from the earliest years to not believe in the existence, or even the possibility, of large-scale conspiracies.

Coming to see the truth of a worldwide conspiracy that has been especially centralized in the past few centuries in a western, Anglo-global establishment is also not something people prefer to hear. New World Order Defined First, one should get clear on defining terms. Bilderberg 2014. Mind control and the NWO. Mind control & NWO archived. The New World Order: Does It All Just Boil Down To A Battle For Your Soul?