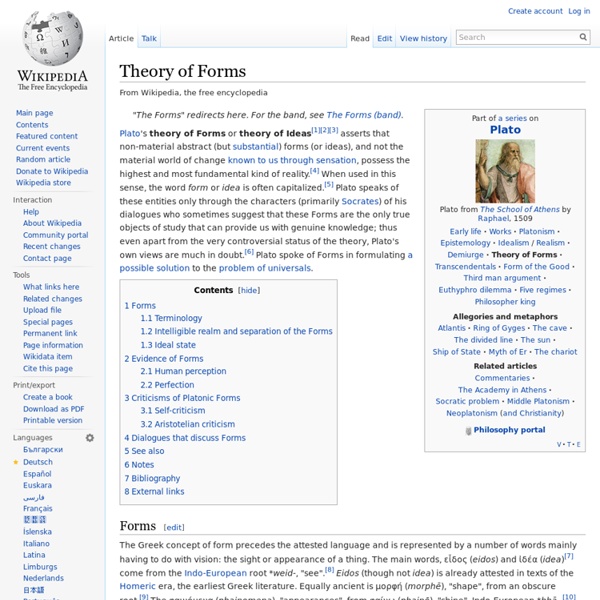 Plato's theory of Forms or theory of Ideas[1][2][3] asserts that non-material abstract (but substantial) forms (or ideas), and not the material world of change known to us through sensation, possess the highest and most fundamental kind of reality.[4] When used in this sense, the word form or idea is often capitalized.[5] Plato speaks of these entities only through the characters (primarily Socrates) of his dialogues who sometimes suggest that these Forms are the only true objects of study that can provide us with genuine knowledge; thus even apart from the very controversial status of the theory, Plato's own views are much in doubt.[6] Plato spoke of Forms in formulating a possible solution to the problem of universals. Forms[edit] The Greek concept of form precedes the attested language and is represented by a number of words mainly having to do with vision: the sight or appearance of a thing. A Form is aspatial (transcendent to space) and atemporal (transcendent to time). Meno Phaedo

Archetype The concept of an archetype /ˈɑrkɪtaɪp/ is found in areas relating to behavior, modern psychological theory, and literary analysis. An archetype can be…: …a statement, pattern of behavior, or prototype which other statements, patterns of behavior, and objects copy or emulate; ……a Platonic philosophical idea referring to pure forms which embody the fundamental characteristics of a thing; ……a collectively-inherited unconscious idea, pattern of thought, image, etc., that is universally present in individual psyches, as in Jungian psychology; ……or a constantly recurring symbol or motif in literature, painting, or mythology (this usage of the term draws from both comparative anthropology and Jungian archetypal theory). Etymology[edit] Plato[edit] The origins of the archetypal hypothesis date back as far as Plato. Jungian archetypes[edit] Archetypal literary criticism[edit] See also[edit] References[edit] Jump up ^ Douglas Harper.

ANGEL NUMBER 444 Number 4 resonates with the vibrations of the Archangels, practicality and responsibility, productivity, illumination and initiation, building solid foundations, stability and ability, honesty and inner-wisdom, determination and endurance, hard work and progress. Number 4 also represents our passion and drive and encourages us to work harmoniously yet diligently to achieve our goals and aspirations. Number 4 is also the number that represents the four elements of Air, Fire, Water and Earth, and the four sacred directions, North, South, East and West. With three 4’s appearing, the influences and energies of the number 4 are magnified and enhanced. Angel Number 444 asks that you pay attention to your intuition and inner-wisdom as your connection with your angels and the angelic realm is very strong at this time. Number 444 relates to number 3 (4+4+4=12, 1+2=3) and Angel Number 3.

Parmenides (dialogue) Parmenides (Greek: Παρμενίδης) is one of the dialogues of Plato. It is widely considered to be one of the more, if not the most, challenging and enigmatic of Plato's dialogues.[1][2][3] The Parmenides purports to be an account of a meeting between the two great philosophers of the Eleatic school, Parmenides and Zeno of Elea, and a young Socrates. The occasion of the meeting was the reading by Zeno of his treatise defending Parmenidean monism against those partisans of plurality who asserted that Parmenides' supposition that there is a one gives rise to intolerable absurdities and contradictions. At this point, Parmenides takes over as Socrates' interlocutor and dominates the remainder of the dialogue. After establishing that Socrates himself has made the distinction between Forms and sensibles, Parmenides asks him what sorts of Form he is prepared to recognize. The second part of the dialogue can be divided in the three following parts: Hypothesis n.1: If it is one.

Phyllotaxis In botany, phyllotaxis or phyllotaxy is the arrangement of leaves on a plant stem (from Ancient Greek phýllon "leaf" and táxis "arrangement").[1] Phyllotactic spirals form a distinctive class of patterns in nature. Pattern structure[edit] Opposite leaf pattern Whorled leaf pattern Two different examples of the alternate (spiral) leaf pattern Brabejum stellatifolium - new growth, showing whorls separated by long internodes. With an alternate (spiral) pattern, each leaf arises at a different point (node) on the stem. Distichous phyllotaxis, also called "two-ranked leaf arrangement" is a special case of either opposite or alternate leaf arrangement where the leaves on a stem are arranged in two vertical columns on opposite sides of the stem. Distichous leaf arrangement in Clivia Aloe plicatilis showing distichous phyllotaxis Boophane disticha is named for its phyllotaxis In an opposite pattern, if successive leaf pairs are perpendicular, this is called decussate. Repeating spiral[edit] Two primordia

Asclepius Asclepius (/æsˈkliːpiəs/; Greek: Ἀσκληπιός, Asklēpiós [asklɛːpiós]; Latin: Aesculapius) was a god of medicine and healing in ancient Greek religion. Asclepius represents the healing aspect of the medical arts; his daughters are Hygieia ("Hygiene", the goddess/personification of health, cleanliness, and sanitation), Iaso (the goddess of recuperation from illness), Aceso (the goddess of the healing process), Aglæa/Ægle (the goddess of beauty, splendor, glory, magnificence, and adornment), and Panacea (the goddess of universal remedy). He was associated with the Roman/Etruscan god Vediovis. He was one of Apollo's sons, sharing with Apollo the epithet Paean ("the Healer").[1] The rod of Asclepius, a snake-entwined staff, remains a symbol of medicine today. Those physicians and attendants who served this god were known as the Therapeutae of Asclepius. Etymology[edit] The etymology of the name is unknown. Mythology[edit] Birth[edit] He was the son of Apollo and a human woman, Coronis.

Fibonacci - Tesseract - Torus - Eye of Providence - Fish of Jesus - Cross - Flower of Life - Star of David - Lattice - Scalar - Sphere - Vesica Piscis‎ - Ying Yang - Mandala - Duality - Opposing Vortex...ETC * Please be patient as this is a continuing work in progress. Until a proper manuscript can be written, the information provided may seem superfluous. I assure you it is not, and it directly relates to Mesopotamia, specifically the Sumerian Number System leading into the cuneiform writing style that to this day has not been properly deciphered or interpreted. (My conclusion is they did NOT use a Base 60 number system. Base 60 is a resonant number system of the Extended Fibonacci Tables as one of the foundations, like a central axis, is the number 12 squared, or 144. They did not count knuckles to arrive at the Base 60 number system. I've decided to release my findings. The reasoning behind this thought comes from the Fibonacci Sequence, and the fact that the sequence that he wrote about in Liber Abaci was not his creation or his own personal discovery, but was an example of the Hindu-Arabic numeral system. How does that relate to what I found? The universe is simple. sixscent@gmail.com

Third man argument Principles of Plato's theory of Forms[edit] Plato's theory of Forms, as it is presented in such dialogues as the Phaedo, Republic and the first part of the Parmenides, seems committed to the following principles: "F" stands for any Form (appearance, property). One-over-many: For any plurality of F things, there is a form of F-ness by virtue of partaking of which each member of that plurality is F.Self-predication: Every form of F-ness is itself F.Non-self-partaking: No form partakes of itself.Uniqueness: For any property F, there is exactly one form of F-ness.Purity: No form can have contrary properties.One/many: The property of being one and the property of being many are contraries.Oneness: Every form is one. The argument[edit] However, the TMA shows that these principles are mutually contradictory, as long as there is a plurality of things that are F: (In the following sentences, large is used as an example; however the argumentation obviously holds for any F.) Interpretation[edit]