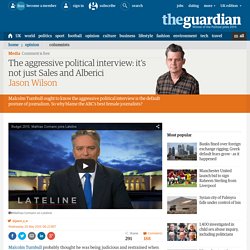 He may have shown us instead that inside every Liberal politician – leather jacket or no – lurks a dinosaur. His patronising advice, delivered in conversation with Andrew Bolt, the most relentless attack-dog journalist in the country, was reserved for the “lady journalists” – not their male colleagues Tony Jones and Chris Uhlmann. Economics and Elections. Britain’s economic performance since the financial crisis struck has been startlingly bad. 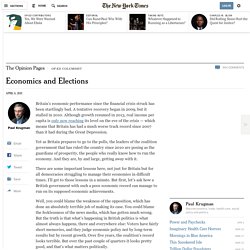 A tentative recovery began in 2009, but it stalled in 2010. Although growth resumed in 2013, real income per capita is only now reaching its level on the eve of the crisis — which means that Britain has had a much worse track record since 2007 than it had during the Great Depression. Yet as Britain prepares to go to the polls, the leaders of the coalition government that has ruled the country since 2010 are posing as the guardians of prosperity, the people who really know how to run the economy. And they are, by and large, getting away with it. There are some important lessons here, not just for Britain but for all democracies struggling to manage their economies in difficult times. Data retention bill 'far too intrusive', says new Press Council chair David Weisbrot.

The new chair of the Australian Press Council, Professor David Weisbrot, has condemned the Abbott government’s data retention bill as “far too intrusive” and warned the proposed law would crush investigative journalism. 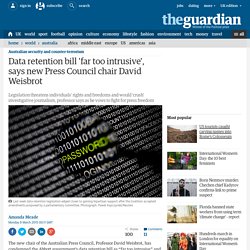 The incoming chair said he plans to take a strong stand against the proposed legislation in particular and press freedom in general as he steps into the role occupied by Professor Julian Disney for five years. “I’m very strongly opposed to the current proposals and I strongly hope that they will change,” Weisbrot told Guardian Australia in the first week in his new role. “I am opposed to it as a private citizen. I think it’s far too intrusive and really changes the relationship between government, policing and the individual in a way that I don’t think we’ve fully worked out as a society. “I think it goes well beyond the traditional social contract. “I think it will tend to crush it, frankly. O'Reilly, Williams and Real War Correspondents  We now know that, according to the reporters who were with him at the time, some of Bill O'Reilly's war stories from Argentina don't appear to be true. 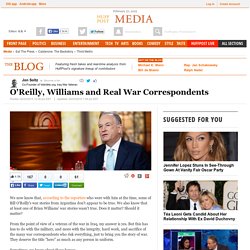 We also know that at least one of Brian Williams' war stories wasn't true. Does it matter? Media companies' metadata warnings go unheeded by intelligence committee. Warnings from every major media company that the government’s new data retention laws risk the proper functioning of a free press have not persuaded the Coalition and Labor to recommend changes in a committee report to be released on Friday. 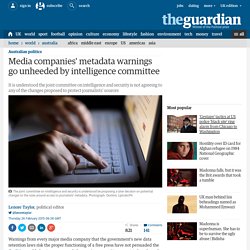 It is understood the joint committee on intelligence and security has not agreed to any of the changes proposed by multiple media organisations – that journalists be exempted from the new laws, or that a warrant be required if an organisation is seeking the metadata of journalists and their sources, or - as a final fallback proposition - that “only the most senior officials of an authorised agency” be allowed to approve access to the metadata of journalists and their sources. Bad business. Peter Oborne's resignation from the Daily Telegraph, revealed on openDemocracy, asks fundamental questions about corporate influence over the media. 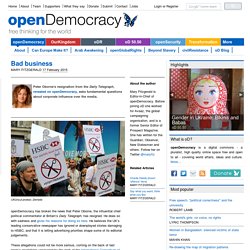 UKUncut protest, Demotix openDemocracy has broken the news that Peter Oborne, the influential chief political commentator at Britain’s Daily Telegraph, has resigned. He does so with sadness and gives his reasons for doing so here. He believes the UK’s leading conservative newspaper has ignored or downplayed stories damaging to HSBC, and that it is letting advertising priorities shape some of its editorial judgements. Why I have resigned from the Telegraph. Five years ago I was invited to become the chief political commentator of the Telegraph. 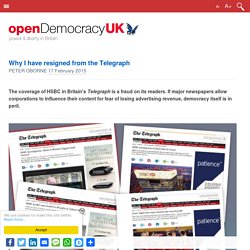 It was a job I was very proud to accept. MI5 accused of covering up sexual abuse at boys’ home. Sim card database hack gave US and UK spies access to billions of cellphones. American and British spies hacked into the world’s largest sim card manufacturer, stealing encryption keys that potentially gave them access to billions of people’s cellphones around the world, according to documents newly released by NSA whistleblower Edward Snowden. 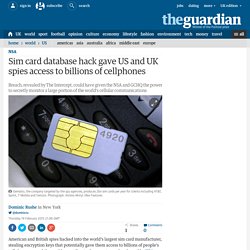 The breach, revealed in documents provided to The Intercept, could have given the NSA and its UK counterpart GCHQ the power to secretly monitor a large portion of the world’s cellular communications, including both voice and data. Gemalto, the company targeted by the spy agencies, produces 2bn sim cards per year for clients including AT&T, Sprint, T-Mobile and Verizon.

The Netherlands company operates in 85 countries around the world and provides cards to some 450 wireless network providers globally. The stolen encryption keys would allow intelligence agencies to monitor mobile communications without the approval or knowledge of telecom companies and foreign governments. Peter Oborne: what I have seen is unprecedented in a quality newspaper. For a step taken out of such forceful conviction, Peter Oborne’s decision to drop a bomb on the Daily Telegraph did not come easily. 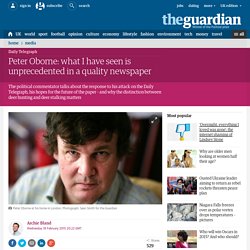 “I had huge reservations,” says the paper’s former chief political commentator of his decision to write an excoriating piece about the Telegraph’s leadership for the website OpenDemocracy, shortly after his very public resignation from the newspaper. “When I first thought about doing it, I decided not to, because I’m conscious that there are countless wonderful journalists there, reporters and writers who do a brilliant job. Students pepper-sprayed by police at Christopher Pyne protest in Sydney CBD. Updated A group of university students protesting at a speech by Education Minister Christopher Pyne have been pepper-sprayed by police in Sydney. 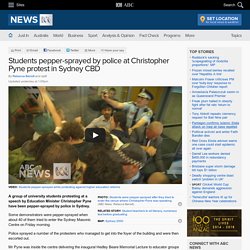 Some demonstrators were pepper-sprayed when about 40 of them tried to enter the Sydney Masonic Centre on Friday morning. Police sprayed a number of the protesters who managed to get into the foyer of the building and were then escorted out. Occupy Houston assassination plot records won't be released - Houston Chronicle. Photo By Cody Duty/Houston Chronicle Occupy Houston protestors lay in the exit ramp of Loop 610 at the Port of Houston Authority Monday, Dec. 12, 2011, in Houston. Rupert Murdoch and the police treat journalists like terrorists. Journalists must protect their sources. From whistleblowers revealing great secrets to exposés of everyday corruption and incompetence, few will talk if they fear they will lose their jobs or maybe more than their jobs. The police might arrest and jail them. In extreme cases, dictatorships or terrorists might kill them. Livelihood, liberty, life – all can be endangered when sources speak out. Our ‘impartial’ broadcasters have become mouthpieces of the elite.

When people say they have no politics, it means that their politics aligns with the status quo. None of us are unbiased, none removed from the question of power. We are social creatures who absorb the outlook and opinions of those with whom we associate, and unconciously echo them. Objectivity is impossible. The illusion of neutrality is one of the reasons for the rotten state of journalism, as those who might have been expected to hold power to account drift thoughtlessly into its arms.

But until I came across the scandal currently erupting in Canada, I hadn’t understood just how quickly standards are falling. In 2013 reporters at CBC, Canada’s equivalent of the BBC, broke a major story. They were astonished. Charlie Hebdo And The War For Civilisation. In Alerts 2015 Post 15 January 2015 Last Updated on 15 January 2015 By Editor Hits: 1440 In 2003, a top security expert told filmmaker Michael Moore, 'there is no one in America other than President Bush who is in more danger than you'.

Moore was attacked with a knife, a blunt object and stalked by a man with a gun. ‘The Post-Communist Nightmare’: An Exchange by Joseph Brodsky. Dear Mr. President: ‘The Post-Communist Nightmare’: An Exchange by Joseph Brodsky. The right has won control of the English-speaking world - thanks to the weakness of the left. Noam Chomsky on Democracy and Education in the 21st Century and Beyond. Democratic Strategies Lost Big. Here's an Alternative. Big Brother’s Liberal Friends. Language of Politics - Serious Science. Why governments started to control population by propaganda rather than by force? Who wants to create uninformed consumers, who will make irrational choices?

Everything You Need to Know About the CIA Torture Report in Under 4 Minutes. How the media shafted the people of Scotland. Perhaps the most arresting fact about the Scottish referendum is this: that there is no newspaper – local, regional or national, English or Scottish – that supports independence except the Sunday Herald. It’s not just Scotland where politics as usual is finished. How the Rich Rule by Dani Rodrik. Why politicians must lie – and how selling ice creams is like an election campaign. Political donations corrupt democracy in ways you might not realise.