Allegory of the Cave 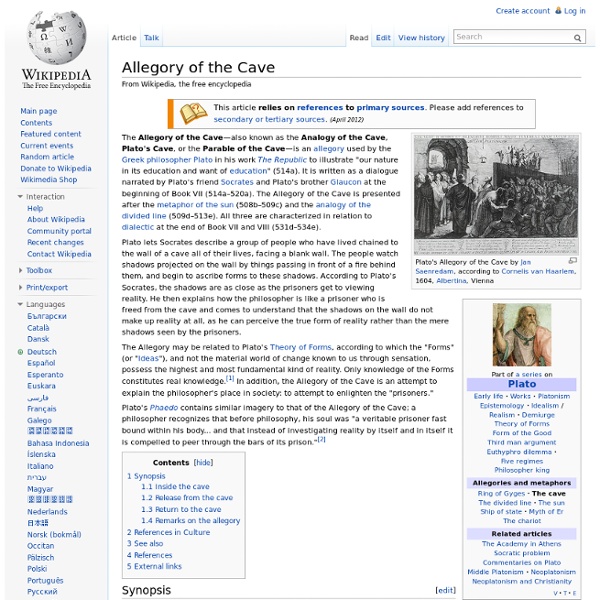 Plato has Socrates describe a gathering of people who have lived chained to the wall of a cave all of their lives, facing a blank wall. The people watch shadows projected on the wall by things passing in front of a fire behind them, and begin to designate names to these shadows. The shadows are as close as the prisoners get to viewing reality. He then explains how the philosopher is like a prisoner who is freed from the cave and comes to understand that the shadows on the wall do not make up reality at all, as he can perceive the true form of reality rather than the mere shadows seen by the prisoners. The Allegory may be related to Plato's Theory of Forms, according to which the "Forms" (or "Ideas"/"Archetypes"), and not the material world of change known to us through sensation, possess the highest and most fundamental kind of reality. Synopsis[edit] Imprisonment in the Cave[edit] Socrates suggests that, for the prisoners, the shadows of artifacts would constitute reality. See also[edit] Related:  midterm

Dithyramb Atticrelief (4th century BCE) depicting an aulos player and his family standing before Dionysos and a female consort, with theatrical masks displayed above. History[edit] Dithyrambs were sung by choruses at Delos, but the literary fragments that have survived are largely Athenian. In Athens, dithyrambs were sung by a Greek chorus of up to fifty men or boys dancing in circular formation (there is no certain evidence that they may have originally been dressed as satyrs) and probably accompanied by the aulos. The ancient Greeks themselves counted among the special criteria of the dithyramb its special rhythm, its aulos accompaniment in Phrygian mode, its highly wrought vocabulary, its considerable narrative content, and its originally antistrophic character.[5] Competitions between groups singing and dancing dithyrambs were an important part of Dionysiac festivals such as the Dionysia and Lenaia. See also[edit] Notes[edit] Sources[edit] Feder, Lillian (1998). External links[edit]

Mycenae Mycenae (/maɪˈsiːni/; Greek: Μυκῆναι Mykēnai or Μυκήνη Mykēnē) is an archaeological site in Greece, located about 90 kilometres (56 miles) southwest of Athens, in the north-eastern Peloponnese. Argos is 11 kilometres (7 miles) to the south; Corinth, 48 kilometres (30 miles) to the north. From the hill on which the palace was located, one can see across the Argolid to the Saronic Gulf. In the second millennium BC, Mycenae was one of the major centres of Greek civilization, a military stronghold which dominated much of southern Greece. Name[edit] A view of the citadel. Although the citadel was built by Greeks, the name Mukanai is thought not to be Greek but rather one of the many pre-Greek place names inherited by the immigrant Greeks.[2] The earliest written form of the name is Mykēnē (Μυκήνη), which is found in Homer.[4] The reconstructed Mycenaean Greek name of the site is Mukānai, which has the form of a plural like Athānai. History[edit] Neolithic to Middle Bronze Age[edit] Decline[edit]

Academy An academy (Attic Greek: Ἀκαδήμεια; Koine Greek Ἀκαδημία) is an institution of higher learning, research, or honorary membership. The name traces back to Plato's school of philosophy, founded approximately 385 BC at Akademia, a sanctuary of Athena, the goddess of wisdom and skill, north of Athens, Greece. In the western world academia is the commonly used term for the collective institutions of higher learning. The original Academy[edit] Before Akademia was a school, and even before Cimon enclosed its precincts with a wall,[1] it contained a sacred grove of olive trees dedicated to Athena, the goddess of wisdom, outside the city walls of ancient Athens.[2] The archaic name for the site was Hekademia, which by classical times evolved into Akademia and was explained, at least as early as the beginning of the 6th century BC, by linking it to an Athenian hero, a legendary "Akademos". The Neoplatonic Academy of Late Antiquity[edit] Renaissance academies in Italy[edit] 15th century accademie[edit]

Tragic hero A tragic hero (or tragic heroine, if a woman) is the protagonist of a tragedy. Aristotle's tragic hero[edit] Aristotle contests that the tragic hero has to be a man “who is not eminently good and just, whose misfortune is brought about not by vice or depravity, but by some error or frailty.” He is not making the hero entirely good in which he can do no wrong but rather has the hero committing an injury or a great wrong leading to his misfortune. Aristotle is not contradicting himself saying that the hero has to be virtuous and yet not eminently good. Being eminently good is a moral specification to the fact that he is virtuous.[2] He still has to be - to some degree - good. References[edit] Jump up ^ S.H. Sources[edit] Carlson, Marvin. 1993. Minoan civilization Map of Minoan Crete The Minoan civilization was an Aegean Bronze Age civilization that arose on the island of Crete and flourished from approximately the 27th century BC to the 15th century BC.[1] It was rediscovered at the beginning of the 20th century through the work of British archaeologist Arthur Evans. Will Durant referred to it as "the first link in the European chain."[2] The early inhabitants of Crete settled as early as 128,000 BC, during the Middle Paleolithic age.[3][4] It was not until 5000 BC that the first signs of advanced agriculture appeared, marking the beginning of civilization. Overview[edit] The term "Minoan" was coined by Arthur Evans after the mythic "king" Minos.[5] Minos was associated in Greek myth with the labyrinth, which Evans identified with the site at Knossos. Chronology and history[edit] Rather than associate absolute calendar dates for the Minoan period, archaeologists use two systems of relative chronology. History[edit] Geography[edit]

Catharsis Dramatic uses[edit] Purgation and purification[edit] In his works prior to Poetics, Aristotle had used the term catharsis purely in its medical sense (usually referring to the evacuation of the katamenia—the menstrual fluid or other reproductive material).[10] Here, however, he employs it as a medical metaphor. F. Lessing sidesteps the medical attribution. Intellectual clarification[edit] In the twentieth century something like a paradigm shift took place in the interpretation of catharsis with a number of scholars contributing to the argument in support of the intellectual clarification concept. It is generally understood that Aristotle's theory of mimesis and catharsis are responses to Plato's negative view of artistic mimesis on an audience. Achieving catharsis in literary analysis[edit] Catharsis can only be achieved by an accurate and persuasive analysis of character and action in a drama. "Catharsis" before tragedy[edit] Therapeutic uses[edit] See also[edit] Notes[edit] References[edit]

Sophist Etymology[edit] From the word σοφός (sophos) is derived the verb σοφίζω (sophizo), which means "to instruct or make learned," but which in the passive voice means "to become or be wise," or "to be clever or skilled in a thing." In turn, from this verb is derived the noun σοφιστής (sophistes), which originally meant "a master of one's craft" but later came to mean "a prudent man" or "wise man."[3] The word for "sophist" in various languages comes from sophistes. The word "sophist" could also be combined with other Greek words to form compounds. Sophists of the 5th century BC[edit] Many sophists taught their skills for a price. In comparison, Socrates accepted no fee, instead professed a self-effacing posture, which he exemplified by Socratic questioning (i.e. the Socratic method, although Diogenes Laertius wrote that Protagoras — a sophist — invented the "Socratic" method[5][6]). Sophists and democracy[edit] Sophists and education[edit] The Second Sophistic[edit] Notes[edit] References[edit]

Homer In the Western classical tradition, Homer (/ˈhoʊmər/; Ancient Greek: Ὅμηρος [hómɛːros], Hómēros) is the author of the Iliad and the Odyssey, and is revered as the greatest of ancient Greek epic poets. These epics lie at the beginning of the Western canon of literature, and have had an enormous influence on the history of literature. When he lived is unknown. Herodotus estimates that Homer lived 400 years before his own time, which would place him at around 850 BC,[1] while other ancient sources claim that he lived much nearer to the supposed time of the Trojan War, in the early 12th century BC.[2] Most modern researchers place Homer in the 7th or 8th centuries BC. The formative influence of the Homeric epics in shaping Greek culture was widely recognized, and Homer was described as the teacher of Greece.[3] Homer's works, which are about fifty percent speeches, provided models in persuasive speaking and writing that were emulated throughout the ancient and medieval Greek worlds.

Socratic method Type of dialog or debate The Socratic method is a method of hypothesis elimination, in that better hypotheses are found by steadily identifying and eliminating those that lead to contradictions. The Socratic method searches for general, commonly held truths that shape beliefs and scrutinizes them to determine their consistency with other beliefs. The basic form is a series of questions formulated as tests of logic and fact intended to help a person or group discover their beliefs about some topic; exploring definitions, and seeking to characterize general characteristics shared by various particular instances. Development[edit] In the second half of the 5th century BC, sophists were teachers who specialized in using the tools of philosophy and rhetoric to entertain, impress, or persuade an audience to accept the speaker's point of view. Method[edit] Elenchus (Ancient Greek: ἔλεγχος, romanized: elenkhos, lit. W. Application[edit] Socratic Circles[edit] Text selection[edit] Socratic Circle texts

Hubris Hubris (/ˈhjuːbrɪs/, also hybris, from ancient Greek ὕβρις), means extreme pride or self-confidence. Hubris often indicates a loss of contact with reality and an overestimation of one's own competence, accomplishments or capabilities, especially when the person exhibiting it is in a position of power. The adjectival form of the noun hubris is "hubristic". Ancient Greek origin[edit] In ancient Greek, hubris referred to actions that shamed and humiliated the victim for the pleasure or gratification of the abuser.[1] The term had a strong sexual connotation, and the shame reflected on the perpetrator as well.[2] In Greek literature, hubris usually refers to infractions by mortals against other mortals. Aristotle defined hubris as shaming the victim, not because of anything that happened to a person or might happen to a person, but merely for that person's own gratification.[4] Hubris is not the requital of past injuries—that is revenge. Modern usage[edit] See also[edit] References[edit]

Civilization Ancient Egypt is a canonical example of an early culture considered a civilization. Civilization or civilisation (in British English) generally refers to state polities which combine these basic institutions, having one or more of each: a ceremonial centre (a formal gathering place for social and cultural activities), a system of writing, and a city. The term is used to contrast with other types of communities including hunter-gatherers, nomadic pastoralists and tribal villages. Civilizations have more densely populated settlements divided into social classes with a ruling elite and subordinate urban and rural populations, which, by the division of labour, engage in intensive agriculture, mining, small-scale manufacture and trade. Civilization concentrates power, extending human control over both nature, and over other human beings.[1] Towards the end of the Neolithic period, various Bronze Age civilizations began to rise in various "cradles" from around 3300 BCE. Characteristics[edit]

Peloponnesian War The Peloponnesian War (431–404 BC) was an ancient Greek war fought by Athens and its empire against the Peloponnesian League led by Sparta. Historians have traditionally divided the war into three phases. In the first phase, the Archidamian War, Sparta launched repeated invasions of Attica, while Athens took advantage of its naval supremacy to raid the coast of the Peloponnese attempting to suppress signs of unrest in its empire. The Peloponnesian War reshaped the ancient Greek world. Greek warfare, meanwhile, originally a limited and formalized form of conflict, was transformed into an all-out struggle between city-states, complete with atrocities on a large scale. Prelude As the preeminent Athenian historian, Thucydides, wrote in his influential History of the Peloponnesian War, "The growth of the power of Athens, and the alarm which this inspired in Lacedaemon, made war inevitable Breakdown of the peace The Delian League in 431 BC The "Archidamian War" The walls surrounding Athens