Maine became the first state in the country Tuesday to pass ranked choice voting. Amid a national vote that rocked the political world Tuesday, voters in Maine narrowly approved a measure that supporters say will be respectively disruptive to the state’s political status quo. 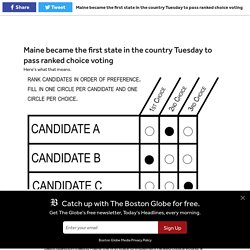 With 98 percent of the vote reporting in the state, 52 percent of voters approved a ballot question making Maine the first state to implement ranked choice voting, a fundamental reform of how voters literally fill out their ballot. In a ranked choice vote system, rather than simply voting for one candidate, voters rank their candidates by preference—first, second, third, and so on. The Corruption of Democracy.

Reform or Revolution. Rights and Responsibilities. Liquid Democracy. The Icelandic Revolution. Make the Presidency Work! Make Congress Work The No Labels Action Plan to Change the Rules and Fix What's Broken Contribute Support the 11-Point Plan Just Signed I'm making the Presidency work because... " Blake Bertrand Prev Next No Labels is a group of Republicans, Democrats and independents who want our government to work again. Discuss Contact the Presidential Candidates Take Action FAQ Shop Booklet Contributions or gifts to No Labels are not tax-deductible. Regular News Conferences for the President The Problem President Eisenhower once began a news conference by saying: “I will mount the usual weekly cross and let you drive the nails.”

Presidents are often uncomfortable being unscripted,and modern presidents in particular are painfully aware that every minor mistake will be blogged, tweeted and breathlessly repeated. President Franklin D. This isn’t good for our democracy... This isn’t good for our democracy. The Unraveling of Government. Frustrated over the inability of political leaders to find common ground on even the most pressing national issues, Americans have developed a long list of people or political practices to blame for the fact that government doesn’t seem to work anymore. 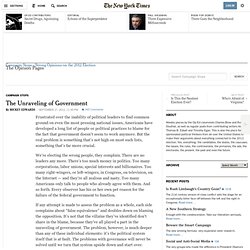 But the real problem is something that’s not high on most such lists, something that’s far more crucial. We’re electing the wrong people, they complain. There are no leaders any more. There’s too much money in politics. Too many corporations, labor unions, special interests and billionaires. If any attempt is made to assess the problem as a whole, each side complains about “false equivalence” and doubles down on blaming the opposition.

Associated Press Photo/Virginia Museum of Fine Arts“George Washington Addressing the Constitutional Convention,” Junius Brutus Stearns, 1856. Let’s begin with the election process itself. People Aren't Smart Enough for Democracy to Flourish, Scientists Say. The democratic process relies on the assumption that citizens (the majority of them, at least) can recognize the best political candidate, or best policy idea, when they see it. 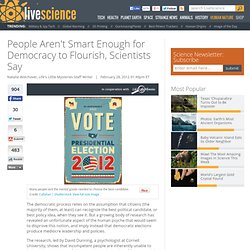 But a growing body of research has revealed an unfortunate aspect of the human psyche that would seem to disprove this notion, and imply instead that democratic elections produce mediocre leadership and policies. The research, led by David Dunning, a psychologist at Cornell University, shows that incompetent people are inherently unable to judge the competence of other people, or the quality of those people's ideas. For example, if people lack expertise on tax reform, it is very difficult for them to identify the candidates who are actual experts. They simply lack the mental tools needed to make meaningful judgments. As a result, no amount of information or facts about political candidates can override the inherent inability of many voters to accurately evaluate them.

An Elegantly Simple Way to Revolutionize Government. (Photo: Francisco Diez / Flickr)What started as a somewhat complex mathematical analysis of the game of politics using game theory (the mathematical study of strategic decision making) has evolved years later into an extraordinarily simple idea that would revolutionize government at all levels. 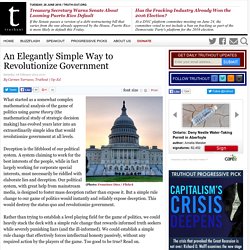 Deception is the lifeblood of our political system. A system claiming to work for the best interests of the people, while in fact largely working for corporate special interests, must necessarily be riddled with elaborate lies and deception. Our political system, with great help from mainstream media, is designed to foster mass deception rather than expose it. But a simple rule change to our game of politics would instantly and reliably expose deception. This would destroy the status quo and revolutionize government. Too Much Of A Good Thing. Too Much of a Good Thing In an 1814 letter to John Taylor, John Adams wrote that “there never was a democracy yet that did not commit suicide.” 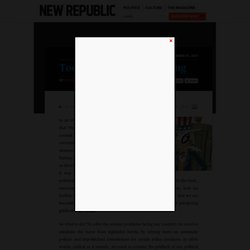 That may read today like an overstatement, but it is certainly true that our democracy finds itself facing a deep challenge: During my recent stint in the Obama administration as director of the Office of Management and Budget, it was clear to me that the country’s political polarization was growing worse—harming Washington’s ability to do the basic, necessary work of governing. If you need confirmation of this, look no further than the recent debt-limit debacle, which clearly showed that we are becoming two nations governed by a single Congress—and that paralyzing gridlock is the result. So what to do? To solve the serious problems facing our country, we need to minimize the harm from legislative inertia by relying more on automatic policies and depoliticized commissions for certain policy decisions.

I know that such ideas carry risks.