Global Democracy Ranking – 2014 Full Dataset. List of countries by income equality. This is a list of countries or dependencies by income inequality metrics, including Gini coefficients, according to the United Nations (UN), the World Bank, the US Central Intelligence Agency (CIA), and the Organisation for Economic Co-operation and Development (OECD). 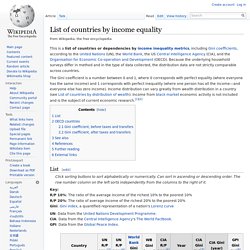 Because the underlying household surveys differ in method and in the type of data collected, the distribution data are not strictly comparable across countries. The Gini coefficient is a number between 0 and 1, where 0 corresponds with perfect equality (where everyone has the same income) and 1 corresponds with perfect inequality (where one person has all the income—and everyone else has zero income). Income distribution can vary greatly from wealth distribution in a country (see List of countries by distribution of wealth). Income from black market economic activity is not included and is the subject of current economic research.[1][2] List[edit] Click sorting buttons to sort alphabetically or numerically. See also[edit] Kesebir-Diener_2008.pdf. There’s more to happiness than numbers. Larry Elliott (If money can’t buy happiness, how are we all feeling as living standards fall? 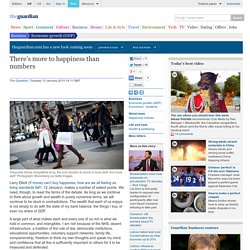 , 12 January), makes a number of salient points. We need, though, to reset the terms of the debate. As long as we continue to think about growth and wealth in purely numerical terms, we will continue to be stuck in contradictions. The wealth that each of us enjoys is not simply to do with the state of my bank balance, the things I buy, or even my share of GDP.

A large part of what makes each and every one of us rich is what we hold in common, and intangibles. We need politicians and commentators to stop talking and point-scoring about who is going to put more (or less) into pockets, and to enter into a more fruitful debate about how we can work to ensure that all citizens are helped to flourish, and what that might mean in the 21st century.Dr David HowardChurch Stretton, Shropshire. Wp-content/uploads/2014/02/WorldHappinessReport2013_online.pdf. The economics of happiness can make for sad reading. You have a job. 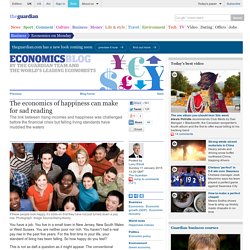 You live in a small town in New Jersey, New South Wales or West Sussex. You are neither poor nor rich. You haven’t had a real pay rise in the past five years. For the first time in your life, your standard of living has been falling. So how happy do you feel? This is not as daft a question as it might appear. The notion that rising incomes makes people happier was challenged in the years leading up to the financial crisis. This finding mattered for two reasons. The idea behind the new economics was that the whole gas-guzzling, consumer-bingeing, model had to be replaced or the planet would fry. Telling voters that their budget flight for a weekend break in Prague was incompatible with capping carbon emissions was always going to be a hard sell. Elib.sfu-kras.ru/bitstream/2311/9908/1/01_Inglehart.pdf. Government and Happiness in 130 Nations: Good Governance Fosters Higher Level and More Equality of Happiness. Happy Planet Index.

01_Inglehart.pdf. InglehartHappinessandDemocracy1.pdf. The Happiest States In America In One Map (INFOGRAPHIC) Which way to happy? 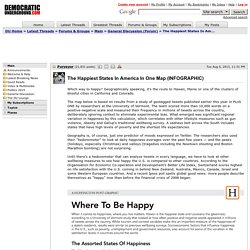 Geographically speaking, it's the route to Hawaii, Maine or one of the clusters of blissful cities in California and Colorado. The map below is based on results from a study of geotagged tweets published earlier this year in PLoS ONE by researchers at the University of Vermont. The team scored more than 10,000 words on a positive-negative scale and measured their frequency in millions of tweets across the country, deliberately ignoring context to eliminate experimental bias. What emerged was significant regional variation in happiness by this calculation, which correlates with other lifestyle measures such as gun violence, obesity and Gallup's traditional wellbeing survey. A sadness belt across the South includes states that have high levels of poverty and the shortest life expectancies. Geography is, of course, just one predictor of moods expressed on Twitter. Daily chart: Money can buy happiness.

World Happiness Index for 2013 - OneEurope. 8.2 Million People were Displaced in 2013 Many displaced people escaped from wars to find a better life in Europe. 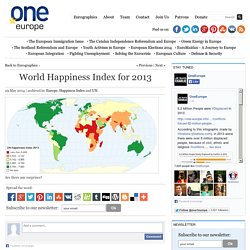 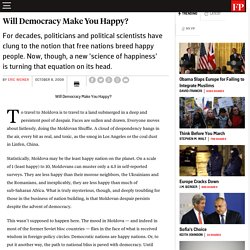 You might imagine thousands of people sacrificing themselves for a power-hungry dictator. You wouldn’t be alone. Albert Einstein himself called nationalism "an infantile disease, the measles of mankind. " Political scientists blame it for civil wars and territorial ambitions, from Rwanda and Yugoslavia to Nazi Germany and Napoleonic France. Many economists view it as an irrational distraction from free-market principles, impeding growth and promoting corruption across the developing world.

But this negative publicity confuses what is more often than not an innocuous sentiment.