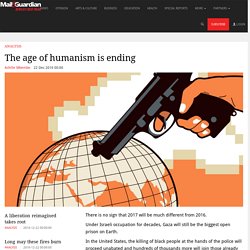 Under Israeli occupation for decades, Gaza will still be the biggest open prison on Earth. In the United States, the killing of black people at the hands of the police will proceed unabated and hundreds of thousands more will join those already housed in the prison-industrial complex that came on the heels of plantation slavery and Jim Crow laws. Europe will continue its slow descent into liberal authoritarianism or what cultural theorist Stuart Hall called authoritarian populism. Despite complex agreements reached at international forums, the ecological destruction of the Earth will continue and the war on terror will increasingly morph into a war of extermination between various forms of nihilism.

Inequalities will keep growing worldwide. Alain Badiou: Reflections on the Recent Election. Alain Badiou’s talk on 9th Novem­ber, 2016 at Uni­ver­sity of Cali­for­nia, Los Ange­les, co-sponsored by the pro­gram in Exper­i­ment­al Crit­ic­al The­ory and the Center for European and Rus­si­an Stud­ies. 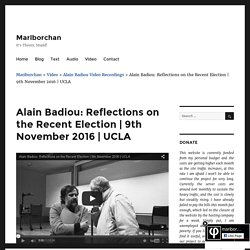 Tran­script: I was think­ing about French poetry, which is in a play of Racine, in fact. It’s a beau­ti­ful, beau­ti­ful sen­tence. In French: “C’était pendant l’horreur d’une pro­fonde nuit.” Owen Jones: the Right are mocking Jeremy Corbyn because they fear him. "Get Corbyn" is nothing if not an inclusive campaign. 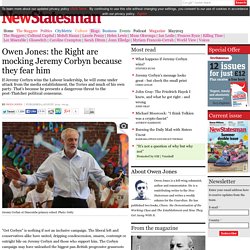 The liberal left and conservatives alike have united, dripping condescension, smarm, contempt or outright bile on Jeremy Corbyn and those who support him. The Corbyn campaign may have unleashed the biggest pan-British progressive grassroots political movement for many years, but it has few friends either in the media establishment or Westminster. The resistible rise of Nigel Farage. Looking at Nigel Farage posing like a movie gangster in a publicity photo for his American trip – the cosy pint he affects for British audiences replaced by a macho cigar – I found myself thinking of Bertolt Brecht’s play The Resistible Rise of Arturo Ui. 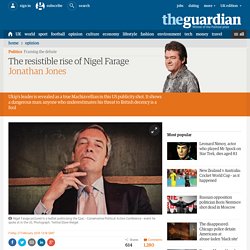 In his 1941 satire on the far, far right, Brecht portrays Adolf Hitler as a Chicago mobster whose thuggish rise to power is made possible by his enemies’ weakness – his rise was “resistible”. Farage is not Hitler, of course – I would not dream of giving him that much historical significance – but he looks a hell of a lot like Arturo Ui in this photograph.

It appears on publicity material in the US, where he has gone down like a stormtrooper – sorry, a storm! – at a conservative Republican rally with his ramped-up rhetoric about the west’s “Judeo-Christian values” being undermined by an Islamist “fifth column”. American republicans apparently believe he may “run Britain”. But we should pay heed to the American view of Farage. Cable companies 'stunned' by Obama's 'extreme' net neutrality proposals. America’s major telecoms and cable companies and business groups came out fighting on Monday after Barack Obama called for tough new regulations for broadband that would protect net neutrality, saying they were “stunned” by the president’s proposals. 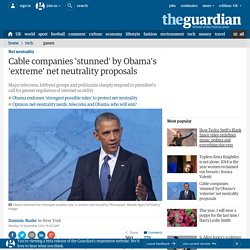 The president called for new regulations to protect “net neutrality” – the principle that all traffic on the internet should be treated equally. His move came as the Federal Communications Commission (FCC) finalises a new set of proposals for regulation after the old rules were overturned by a series of court defeats at the hands of cable and telecom companies.

At a knife’s edge: elections and democracy in Thailand. Gripped by a deadly crisis, with civil unrest and election boycotts spreading, the people and politicians of Thailand once again find themselves back in the global media headlines. 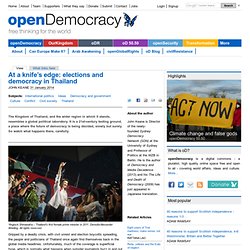 Unfortunately, much of the coverage is superficial hype, which is normally what happens when outsider journalists buzz in and out of a country (‘clusterfuck’, as some say), hastily file their reports, then move on to the next episode of breaking news, wherever it is happening. Theresa May's plans for terror suspects undermine democracy. On 26 August 1789, mostly by the votes of its third estate members, the National Assembly of France adopted the Déclaration universelle des droits de l'homme et du citoyen; on 9 November it became the law. 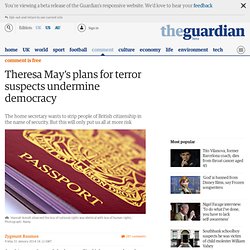 The rest is history – long and wobbly. Long – as the ideas of the declaration, having lost little of their topicality, continue their gradual, slow yet relentless conquest of the globe to this very day. The Crisis of the Democracies by Stéphane Hessel and Edgar Morin. Stéphane Hessel, editor of the 1948 Universal Declaration of Human Rights, and Edgar Morin believe it is our right to do more than merely survive. 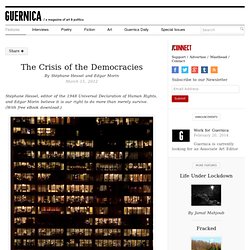 (With free eBook download.) Photograph via Flickr by Giant Ginkgo Download The Path to Hope as an eBook here, courtesy Other Press Under good government, poverty is shameful; under bad government, wealth is shameful. Snowden, Surveillance And The Secret State. In Alerts 2013 Post 28 June 2013 Last Updated on 28 June 2013 By Editor Hits: 8335 By David Cromwell and David Edwards Reports of Washington's anger directed at surveillance whistleblower Edward Snowden indicate a basic truth about power. 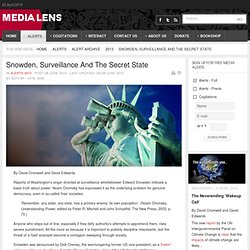 Europe must condemn Erdogan, but without hubris or illusions. Another year, another country, another square: after Wenceslas in Prague, Independence in Kiev, Azadi in Tehran, Red in Moscow and Tahrir in Cairo, there's now Taksim in Istanbul. Each square reaches the world through totemic photographic images. In Istanbul it is that young woman in a red dress – Ceyda Sungur, a young academic at the city's technical university – being sprayed with tear gas at close quarters by a riot policeman. Review: The Wisdom of Crowds by James Surowiecki. The Wisdom of Crowds by James Surowiecki295pp, Little, Brown, £16.99 Who wants to be average? 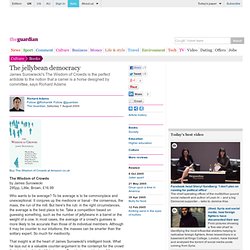 To be average is to be commonplace and unexceptional. From Trafalgar to Taksim, the politics of the square puts the wind up power. Illustration by Belle Mellor Why does power hate a city square? A square fields no army, commands no votes, has nowhere to go. It is just a space. Yet it is space that invites occupation, an occupation hostile to power. Hence Turkey's president felt obliged yesterday to "recapture" Taksim Square in Istanbul. Squares are civic holy places.

A rightwing insurrection is usurping our democracy. To subvert means to turn from below. We need a new word, which means to turn from above. The primary threat to the democratic state and its functions comes not from mob rule or leftwing insurrection, but from the very rich and the corporations they run. These forces have refined their assault on democratic governance.