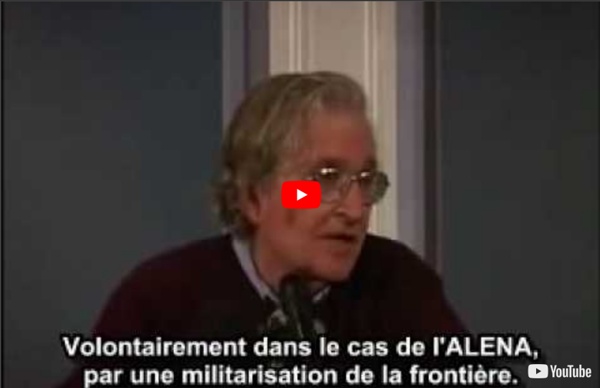 The Leading Terrorist State (Image: USA flag via Shutterstock; Edited: JR/TO)"It's official: The U.S. is the world's leading terrorist state, and proud of it." That should have been the headline for the lead story in The New York Times on Oct. 15, which was more politely titled "CIA Study of Covert Aid Fueled Skepticism About Helping Syrian Rebels." The article reports on a CIA review of recent U.S. covert operations to determine their effectiveness. The White House concluded that unfortunately successes were so rare that some rethinking of the policy was in order. The article quoted President Barack Obama as saying that he had asked the CIA to conduct the review to find cases of "financing and supplying arms to an insurgency in a country that actually worked out well. And they couldn't come up with much."

The Long, Shameful History of American Terrorism "It's official: The U.S. is the world's leading terrorist state, and proud of it." That should have been the headline for the lead story in the New York Times on October 15, which was more politely titled "CIA Study of Covert Aid Fueled Skepticism About Helping Syrian Rebels." The article reports on a CIA review of recent U.S. covert operations to determine their effectiveness. The White House concluded that unfortunately successes were so rare that some rethinking of the policy was in order.

WATCH: Chomsky Blasts 'American Sniper' and the Media that Glorifies It Noam Chomsky had some choice words about the popularity of "American Sniper," its glowing New York Times review, and what the worship of a movie about a cold-blooded killer says about the American people. It's not good. During a Cambridge, Massachusetts event hosted by The Baffler, Chomsky first read the glowing recent review the New York Times gave the movie. That review begins inauspiciously by insulting, “America’s coastal intelligentsia, which has busied itself with chatter over little-seen art dramas while everyday Americans showed up en masse for a patriotic, pro-family picture which broke all attendance records in its opening days.” So, Chomsky wonders aloud: “What was the patriotic, pro-family film that so entranced everyday Americans? It’s about the most deadly sniper in American history, a guy named Chris Kyle, who claims to have used his skills to have killed several hundred people in Iraq.”

Noam Chomsky on the Roots of American Racism The Stone is a forum for contemporary philosophers and other thinkers on issues both timely and timeless. Photo This is the eighth in a series of interviews with philosophers on race that I am conducting for The Stone. This week’s conversation is with Noam Chomsky, a linguist, political philosopher and one of the world’s most prominent public intellectuals. He is the author of many books, including, most recently, “On Western Terrorism: From Hiroshima to Drone Warfare,” with Andre Vltchek. Problem loading page Who is Noam Chomsky ? Noam Chomsky was born on December 7, 1928 in Philadelphia, USHe began working at the Massachusetts Institute of Technology in 1955He is a famous linguist, philosopher and political activistHis work from the 1950s revolutionised the field of linguisticsHe rose to prominence for his anti-Vietnam war activismHe opposes ruling elites and is a sharp critic of US and western foreign policyHe has authored hundreds of books Isabelle Kumar: “The world in 2015 seems a very unsettled place but if we take a big picture view do you feel optimistic or pessimistic about the general state of play?” Noam Chomsky: “In the global scene we are racing towards a precipice which we are determined to fall over which will sharply reduce the prospects for decent survival.”

Noam Chomsky: Why America Is the Gravest Threat to World Peace To stay on top of important articles like these, sign up to receive the latest updates from TomDispatch.com here. Throughout the world there is great relief and optimism about the nuclear deal reached in Vienna between Iran and the P5+1 nations, the five veto-holding members of the U.N. Security Council and Germany. Most of the world apparently shares the assessment of the U.S. The Empire of Chaos: An Interview With Noam Chomsky (Image: Jared Rodriguez / Truthout) US foreign policy in the 21st century has little to offer other than massive military power. Indeed, gone are the days when military might was used in order to "recreate the world in America's image." In the post-Cold War era, US military interventions take place in the absence of an overall strategic vision and with ideological justifications lacking force and conviction even among the United States' traditional allies. Little wonder then that military interventions, always illegal and unjustifiable, end up accomplishing nothing more than the creation of black holes, while giving rise in turn to new and ever increasing violent terrorist organizations bent on spreading their own vision of social and political order.

Noam Chomsky: A Republican president means doom In a new interview with Truthout’s CJ Polychroniou, renowned MIT linguist and longtime political activist Noam Chomsky conveyed his fear that the election of a Republican president in 2016 could further destabilize U.S. international relations, jeopardizing the security of the nation and ripped the notion of “democracy promotion” as a driving force of U.S. foreign policy. “Supporting democratization (in reality, not rhetoric),” Chomsky explained, will likely have “consequences that the U.S. would not favor.” “That is why when the U.S. supports “democracy”; it is ‘top-down’ forms of democracy in which traditional elites linked to the US remain in power.”

Horror Beyond Description: Noam Chomsky on the Latest Phase of the War on Terror A car bomb from ISIS is blown up by an antitank missile before the driver could reach his target, near vehicles that had just entered a small village on Highway 47, in Mount Sinjar, Iraq, November 12, 2015. (Bryan Denton / The New York Times) The "war on terror" has now taken the form of a full-on global war campaign.