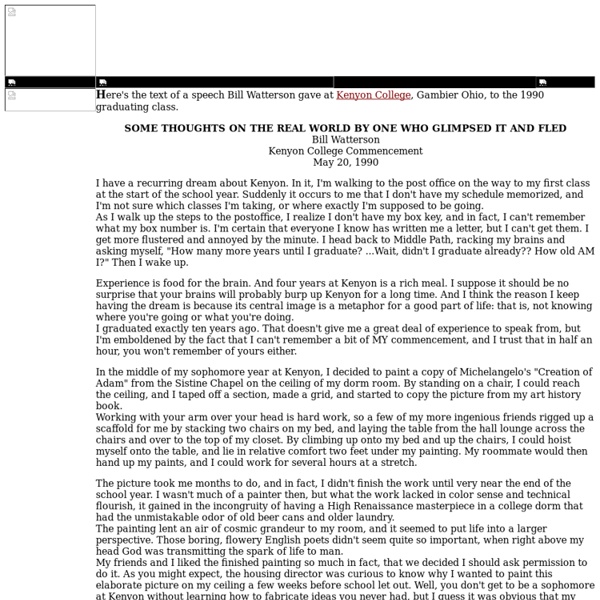 Here's the text of a speech Bill Watterson gave at Kenyon College, Gambier Ohio, to the 1990 graduating class. SOME THOUGHTS ON THE REAL WORLD BY ONE WHO GLIMPSED IT AND FLED Bill Watterson Kenyon College Commencement May 20, 1990 I have a recurring dream about Kenyon. In it, I'm walking to the post office on the way to my first class at the start of the school year. Suddenly it occurs to me that I don't have my schedule memorized, and I'm not sure which classes I'm taking, or where exactly I'm supposed to be going. Experience is food for the brain. In the middle of my sophomore year at Kenyon, I decided to paint a copy of Michelangelo's "Creation of Adam" from the Sistine Chapel on the ceiling of my dorm room. The picture took me months to do, and in fact, I didn't finish the work until very near the end of the school year. It's surprising how hard we'll work when the work is done just for ourselves. We're not really taught how to recreate constructively. Boy, was I smug. Bill Watterson Related:  Idée écriture Science - SF - Fantastique • Strategy • Good Advice

A Look at How Helical Magazines Works. 10 Painfully Obvious Truths Everyone Forgets Too Soon The truth does not cease to exist when it is ignored. You know how you can hear something a hundred times in a hundred different ways before it finally gets through to you? The ten truths listed below fall firmly into that category – life lessons that many of us likely learned years ago, and have been reminded of ever since, but for whatever reason, haven’t fully grasped. This, my friends, is my attempt at helping all of us, myself included, “get it” and “remember it” once and for all… 1. We know deep down that life is short, and that death will happen to all of us eventually, and yet we are infinitely surprised when it happens to someone we know. LIVE your life TODAY! 2. Your life is yours alone. Remember, it’s always better to be at the bottom of the ladder you want to climb than the top of the one you don’t. And if life only teaches you one thing, let it be that taking a passionate leap is always worth it. 3. Busyness isn’t a virtue, nor is it something to respect. 4. 5. 6. 7. 8. 9.

Depression Part Two I remember being endlessly entertained by the adventures of my toys. Some days they died repeated, violent deaths, other days they traveled to space or discussed my swim lessons and how I absolutely should be allowed in the deep end of the pool, especially since I was such a talented doggy-paddler. I didn't understand why it was fun for me, it just was. But as I grew older, it became harder and harder to access that expansive imaginary space that made my toys fun. I played out all the same story lines that had been fun before, but the meaning had disappeared. Depression feels almost exactly like that, except about everything. At first, though, the invulnerability that accompanied the detachment was exhilarating. The beginning of my depression had been nothing but feelings, so the emotional deadening that followed was a welcome relief. Which leads to horrible, soul-decaying boredom. Months oozed by, and I gradually came to accept that maybe enjoyment was not a thing I got to feel anymore.

Gift ideas for science geeks - Album on Imgur Unusual articles This page is for Wikipedians to list articles that seem unusual. These articles are valuable contributions to the encyclopedia, but are a bit odd, whimsical, or something you would not expect to find in Encyclopædia Britannica. We should take special care to meet the highest standards of an encyclopedia with these articles lest they make Wikipedia appear idiosyncratic. If you wish to add articles to this list, the article in question should preferably meet one or more of these criteria: This definition is not precise. Some articles may still be considered unusual even if they do not fit these guidelines. To keep the list of interest to readers, each entry on this list should be an article on its own (not merely a section in a less unusual article) and of decent quality, in large meeting Wikipedia's manual of style. ) indicates a featured article. ) indicates a good article. Places and infrastructure[edit] Good golly, Miss Molly – jus' love your folly! Americas[edit] Africa[edit] Europe[edit]

10 Psychological Experiments That Went Horribly Wrong Utilizing Your Natural Advantage A friend once shared a simple, but profound story about a school in a distant village. Now I’m excited to share it with you. Far, far away, say half a world away, there was a small, brick school. Atop the school was a bell, which rang promptly at eight o’clock every morning to call the children to class. Except for one. A particular young girl named Marie came early and stayed late every day. One day when the other children were particularly disruptive and inattentive, the teacher singled out the girl as an example. Almost immediately one of the boys from the back of the room spoke up, blurting out “it isn’t fair to ask us to be like her.” “Why not?” The boy squirmed in his chair. “And what might that be?” “She’s an orphan,” he whispered, almost under his breath. The young boy was right. At school, she was grateful for what others took for granted. The philosopher Cicero once said, “Gratitude is not only the greatest of virtues but the parent of all the others.” Don’t let that be you.

Straight White Male: The Lowest Difficulty Setting There Is I’ve been thinking of a way to explain to straight white men how life works for them, without invoking the dreaded word “privilege,” to which they react like vampires being fed a garlic tart at high noon. It’s not that the word “privilege” is incorrect, it’s that it’s not their word. When confronted with “privilege,” they fiddle with the word itself, and haul out the dictionaries and find every possible way to talk about the word but not any of the things the word signifies. So, the challenge: how to get across the ideas bound up in the word “privilege,” in a way that your average straight white man will get, without freaking out about it? Being a white guy who likes women, here’s how I would do it: Dudes. Okay: In the role playing game known as The Real World, “Straight White Male” is the lowest difficulty setting there is. This means that the default behaviors for almost all the non-player characters in the game are easier on you than they would be otherwise. Oh, and one other thing.

Net Neutrality About Net Neutrality is a network design principle and digital rights movement which advocates Internet service providers (ISPs) to treat all Internet traffic equally in order to maintain an “open Internet.” The principle is in opposition to a “closed Internet” in which providers restrict access to content, filter content or use “traffic shaping” to degrade access to specific web services. Online History Although the basic concept of net neutrality is often credited with the open access movement and political activist Lawrence Lessig as early as 2001, the term was first coined by Columbia law professor Tim Wu in a 2003 paper titled “Network Neutrality, Broadband Discrimination.” Principles of Network Freedom Dear Chairman Barton and Ranking Member Dingell, I appreciate the inquiries by your staff about my availability to appear before the Committee and to share Google’s views about draft telecommunications legislation and the issues related to “network neutrality.” Save The Internet Privacy

Max Ehrmann's "Desiderata" Max Ehrmann Desiderata Go placidly amid the noise and haste, and remember what peace there may be in silence. As far as possible without surrender be on good terms with all persons. Speak your truth quietly and clearly; and listen to others, even the dull and the ignorant; they too have their story. Avoid loud and aggressive persons, they are vexations to the spirit. Keep interested in your own career, however humble; it is a real possession in the changing fortunes of time. Be yourself. Take kindly the counsel of the years, gracefully surrendering the things of youth. You are a child of the universe, no less than the trees and the stars; you have a right to be here. Therefore be at peace with God, whatever you conceive Him to be, and whatever your labors and aspirations, in the noisy confusion of life keep peace with your soul. With all its sham, drudgery, and broken dreams, it is still a beautiful world. Max Ehrmann, Desiderata, Copyright 1952.

A Declaration of the Independence of Cyberspace by John Perry Barlow Governments of the Industrial World, you weary giants of flesh and steel, I come from Cyberspace, the new home of Mind. On behalf of the future, I ask you of the past to leave us alone. You are not welcome among us. You have no sovereignty where we gather. We have no elected government, nor are we likely to have one, so I address you with no greater authority than that with which liberty itself always speaks. Governments derive their just powers from the consent of the governed. You have not engaged in our great and gathering conversation, nor did you create the wealth of our marketplaces. You claim there are problems among us that you need to solve. Cyberspace consists of transactions, relationships, and thought itself, arrayed like a standing wave in the web of our communications. We are creating a world that all may enter without privilege or prejudice accorded by race, economic power, military force, or station of birth. Davos, SwitzerlandFebruary 8, 1996

The 13 Biggest Failures from Successful Entrepreneurs and What They’ve Learned from them 173 Flares Filament.io 173 Flares × One of the great things about our focus on transparency at Buffer is that we get to help other people learn from our experiences. We love learning from others as well, and since we got so much out of our round-up of counterintuitive advice, we wanted to find out even more about what other people have learned from experience. Without any further ado and in their own words, here are some of the biggest mistakes and lessons learned from 13 successful entrepreneurs. 1. Hiten Shah, Co-Founder at KISSmetrics My co-founder and I spent $1,000,000 on a web hosting company that never launched. We have now learned to spend smart, optimize for learning and focus on customer delight. Hiten has since co-founded two wildly successful analytics companies with KISSmetrics and Crazy Egg 2. Robin Chase, Co-Founder of Zipcar Get to your customers as fast as possible & learn from them to build your product. 3. Rand Fishkin – CEO of Moz and Co-Founder of Inbound.org 4. 5. 6. 7.