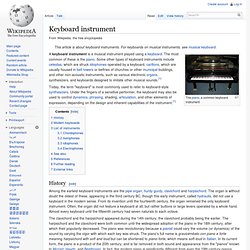 The organ is without doubt the oldest of these, appearing in the third century BC, though this early instrument, called hydraulis, did not use a keyboard in the modern sense. Piano. The pianoforte, commonly abbreviated to piano,[1] is a musical instrument played using a keyboard. It is widely used in classical and jazz music for solo performances, ensemble use, chamber music and accompaniment and for composing and rehearsal. Although the piano is not portable and often expensive, its versatility and ubiquity have made it one of the world's most familiar musical instruments. The word piano is a shortened form of pianoforte (PF), the Italian word for the instrument (which in turn derives from the previous terms gravicembalo col piano e forte and fortepiano).

The Italian musical terms piano and forte indicate "soft" and "strong" respectively,[3] in this context referring to the variations in sound volume the instrument produces in response to a pianist's touch on the keys: the greater the velocity of a key press, the greater the force of the hammer hitting the strings, and the louder the sound of the note produced. Clavichord. History and use[edit] The clavichord was invented in the early fourteenth century.[1][2] In 1504, the German poem "Der Minne Regeln" mentions the terms clavicimbalum (a term used mainly for the harpsichord) and clavichordium, designating them as the best instruments to accompany melodies.

The "Lépante" clavichord,[3] Musée de la Musique, Paris One of the earliest references to the clavichord in England occurs in the privy-purse expenses of Elizabeth of York, queen of Henry VII, in an entry dated August 1502: Item. The same day, Hugh Denys for money by him delivered to a stranger that gave the queen a payre of clavycordes. Pablo Black. Organ. Non-piped organs include the reed organ or harmonium, which like the accordion and harmonica (or "mouth organ") use air to excite free reeds. Electronic organs or digital organs, notably the Hammond organ, generate electronically produced sound through one or more loudspeakers.

Mechanical organs include the barrel organ, water organ, and Orchestrion. These are controlled by mechanical means such as pinned barrels or book music. Little Barrel organs dispense with the hands of an organist and bigger organs are powered in most cases by an organ grinder or today by other means such as an electric motor. Booker T & The MG's - 'Time Is Tight' (from the 1968 lp 'Uptight')

Mishka - Above the bones: 3rd Eye Vision. How do you play reggae keyboard. How to play reggae - 5 things You Should Know About The Reggae Keyboard. The reggae keyboard is probably the hardest instrument in reggae music to get information on. It is almost an enigma; search results in Google or any other place on reggae keyboard does not reveal much. Here are 5 five questions about this amazing instrument that I’ve answered for you. How Are Keyboards Used in Reggae? Autumn Sounds. Ansell Collins. Ansell Collins (sometimes spelled Ansil or Ansel) is a Jamaican keyboard player, producer, and occasional singer.

Revolutionaries - Post Mortem (InstraDub) TEN TO ONE. Double Barrel (HQ) Monkey Spanner. Ain't That Lovin You. Power To The People. Ride Your Pony. In The Ghetto. Shocks of Mighty. Lonely Man Am I. Slavery Days. Interview Bob Marley and Tyrone Downie. A Quiet Place (ALA Johnny Dollar) Give Me Some Light. Burning Love. Secret Weapon. My Best Girl. Just My Imagination. What A Confusion (Live) Earl Lindo. Earl "Wire" Lindo (sometimes referred to as "Wya") is a Jamaican reggae musician, born 7 January 1953. He is a member of The Wailers and has collaborated with numerous reggae artists including Burning Spear. Biography[edit] Lindo can be heard on an album credited to the Impact All-Stars. Released in 1975, the album is a collection of dub tracks recorded at Randy's Studio 17.[1] Today Earl Lindo resides with his wife Cleopatra Rosemary, and two daughters Kyan and Kaleigh in London, England.