B&Q boss mocks Alex Salmond's 'grand conspiracy' claim. But Douglas Alexander, the Shadow Foreign Secretary, mocked the idea that companies like John Lewis and Marks and Spencer were “lying to people” and said what was really happening was “an avalanche of fact sweeping away” the separatists’ assertions. 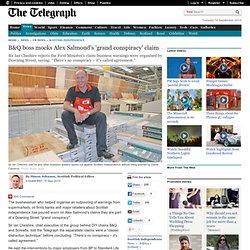 Sir Ian, the chief executive of the Kingfisher DIY group, said he held discussions with his peers from the other companies and rejected there being any “grand conspiracy”, saying the businesses he encouraged to speak out were keen to do so. “Over the years everybody has expressed concerns and we have the same concerns. There’s no conspiracy – it’s called agreement,” he said. Dismissing Mr Salmond’s claims, he said: “It’s a classic distraction technique – look at how the message came out and forget what’s behind it. This is a serious, grown-up intervention.” Crucial Bang on Twitter: "@davidschneider Wow, @DavidBeckham's original Better Together draft to Scotland is so much more revealing. #IndyRef. Sawmill staff feel pressured over Indy vote. Staff at a Dalbeattie sawmill claim they’re being pressured into voting against Scottish independence. 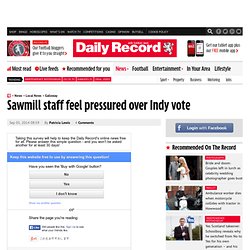 Bosses at BSW Timber handed out leaflets to 150 employees stating a Yes vote would be the biggest risk their business could face. The publication, signed by chairman Martin Gale, also outlines the likelihood of “significant changes” in the company should Scotland go it alone on September 18. One employee, who asked not to be named, said the leaflet wasn’t received well by many of the workforce. He added: “We should not be told how to vote. Scotland’s exporting body charged for promoting whisky in UK embassies : Business for Scotland. Earlier on Today Sandy Adam of Business for Scotland and Springfield Property Group (Scottish House-builder of the year two years running) was on BBC Radio 5 Live. 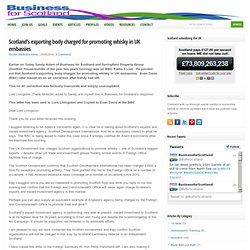 He pointed out that Scotland’s exporting body charged for promoting whisky in UK embassies. Evan Davis (BBC) later issued an on air correction after Sandy had left. This on air correction was factually inaccurate and simply unacceptable. Lord Livingston (Trade Minister) wrote to Sandy and myself this is Business for Scotland’s response. This letter has been sent to Lord Livingston and Copied to Evan Davis at the BBC Dear Lord Livingston. MASS SURVEILLANCE: HARVIE QUESTIONS JUSTICE SECRETARY. Patrick Harvie, MSP for Glasgow, is highlighting the challenge Scotland faces to oppose the mass surveillance of ordinary citizens by UK Government agencies. 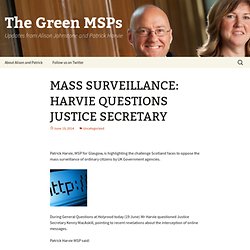 During General Questions at Holyrood today (19 June) Mr Harvie questioned Justice Secretary Kenny MacAskill, pointing to recent revelations about the interception of online messages. Patrick Harvie MSP said: The subhumans. One of the most enlightening aspects of doing this website has been seeing how the nation’s elected representatives behave towards the people they ostensibly represent. 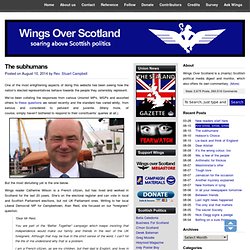 We’ve been collating the responses from various Unionist MPs, MSPs and assorted others to these questions we raised recently and the standard has varied wildly, from serious and considered to petulant and juvenile. (Many more, of course, simply haven’t bothered to respond to their constituents’ queries at all.) But the most disturbing yet is the one below. Wings reader Catherine Wilson is a French citizen, but has lived and worked in Scotland for the last 20 years. She’s on the electoral register and can vote in local and Scottish Parliament elections, but not UK Parliament ones. What’s all this “we”, paleface? Better Together vs the truth. Like thousands of other Scots over the weekend, I received an extra dose of referendum propaganda with my Sunday papers. 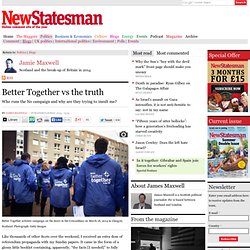 It came in the form of a glossy little booklet containing, apparently, “the facts [I needed]” to fully appreciate both the “benefits of staying in the UK” and the “risks of independence”. Bits of it were pretty convincing. A Yes vote may well put some Scottish defence jobs, particularly those dependent on UK government contracts, at risk. Without radical immigration or pensions reform, an independent Scotland could struggle to cope with burgeoning demographic pressures. UK Government STILL Breaking Election Rules in Indyref. UK Government STILL Breaking Election Rules in Indyref A few days ago, I posted information showing the the UK Government is paying for online adverts for the BetterTogether Campaign. 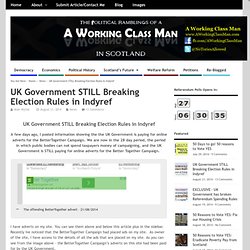 We are now in the 28 day period, the period in which public bodies can not spend taxpayers money of campaigning, and the UK Government is STILL paying for online adverts for the Better Together Campaign. The offending BetterTogether advert – 21/08/2014 I have adverts on my site. You can see them above and below this article plus in the sidebar. If I click that ad I can get even more info: Trident safety concerns must be addressed. As Westminster presses on with its plans to spend £100bn to renew Trident, the acclaimed American investigative journalist and author Eric Schlosser is preparing a visit to Scotland to highlight the inherent design flaws in the Trident missile system. 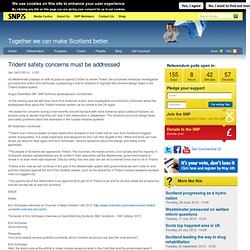 Angus Robertson MP, SNP Defence spokesperson commented: “In the coming year we will hear more from American author and investigative journalist Eric Schlosser about the widespread fears about the Trident missiles system, as he comes to the UK again. “He raised his concerns during a visit recently and will be back with more evidence about safety at Faslane, as people come to decide how they will vote in the referendum in September. The concerns surround design flaws and safety problems about the warheads in the nuclear missiles systems. Mr Robertson continued: UK Government Ignores Scotland's Opposition to GM Crops in EU. “The Scottish Government’s position on GM is very different to that of the UK Government – how can our Ministers trust any UK government minister who says he will take their views into account but when it comes to crunch negotiations ignore their previous pledges? 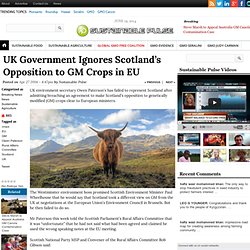 With a Yes vote (for an independent Scotland) in September, Scotland will speak with its own voice at the EU top table.” Paterson is a keen GM fan, telling a farmers’ conference in Oxford in January that Europe could become “the museum of world farming” if countries failed to embrace GM crops. NHS ban medicine if you are 'too old' in new attack on Britain's elderly. Older patients would effectively be written off on the grounds that they no longer make a big enough financial contribution to society. 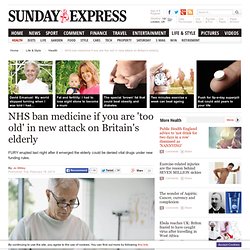 The Department of Health is demanding the changes in an attempt to cut the crippling NHS medicines bill. But Katherine Murphy, chief executive of the Patients’ Association, called the plans “disturbing and discriminatory”, adding: “Human life cannot be assessed in terms of cost and benefit.” The Daily Express, which is crusading for Respect For The Elderly, revealed earlier this month how Britain's older generation is already under attack from health and social care changes. We told how hundreds of vulnerable pensioners are being forced to sell their homes to pay for care no longer provided by the state.

And in January we reported how elderly cancer patients are being branded “too old to treat” and denied drugs. Police face 'a hammering' if Scotland votes No, say former officers. The record number of police in Scotland will be put at risk if the country votes to stay in the UK next month, a former senior officer has claimed. Allan Burnett, who was director of intelligence at Strathclyde Police and was also assistant chief constable in charge of counter-terrorism in Scotland, warned of the impact of a No vote on policing north of the border. His concerns were echoed by two other former leading members of the force: James Fraser, a previous chairman of the Scottish Police Federation, and David Ross, an ex-vice-chair of the organisation.

Mr Burnett contrasted the situation south of the border, where he said officer numbers are "being slashed", with Scotland, where police numbers have been maintained. "Police numbers in England and Wales have fallen more rapidly than anywhere else in Europe," he argued. "Meanwhile, Scotland continues to benefit from record numbers in the police service. Westminster Rolls Back Devolved Power To Frack Scotland.

December 2013 (repost): No! The title is not a metaphore! This is the news that a Scottish MP has reacted with fury after the Scottish Parliament was stripped of a key energy power after a House of Lords amendment was backed by Unionist MPs. Boris Johnson rallies Tories against more powers. No further tax powers for Scotland, says David Cameron. SCOTS have been warned a substantial increase in financial powers for Holyrood is not an option if Scotland wants to remain within the United Kingdom. In a blunt message to Scottish politicians and voters, sources close to Prime Minister David Cameron say an increase in powers – such as devo-max – is “inconsistent” with staying in the UK and that they must back independence if they want full financial separation from Westminster.

The sources said a unified tax and benefits system across the UK, was at the “heart” of a single country, and could not be devolved to Scotland. The warning – which appears to rule out both devo-max and other forms of fiscal autonomy – represents a high-stakes gamble for Cameron, with polls suggesting voters in Scotland support an option to give Holyrood more powers. Civic groups will launch a fresh campaign tomorrow demanding a full debate on the options available to voters, arguing that the current choice between independence and the status quo is too narrow. Punishing Scotland « Here comes the love. Scots risk losing human rights by voting 'no', warns top European advocate.

Scots could lose their basic human rights if they vote 'no' according to leading European advocate Scott Crosby Scottish News: Scots risk losing human rights by voting 'no', warns top European advocate EDINBURGH - Should Scots vote 'no' in next September's independence referendum they could lose their basic human rights, a leading European advocate has warned. Forget the postcard Dave, it's time to pay us a visit. Dear Dave, I can call you Dave? It turns out we're friends, after all. From what you say, we could even be family. This alone is exciting news. We've never had a Tory in the family before, least of all one even slightly worried about what we might think or do.

That was quite a speech you gave there, Dave. It's a pity. UK Government accused of intimidating companies to back No Campaign. Philip Dunne used MOD position to pressure suppliers. Top 10 Unionist Myths - DEBUNKED. "Scotland has been shafted . . . " Ian Hamilton QC.