How a medieval mystic was the first creator of fanfiction. In his essay ‘Uncritical Reading’ (2004), the Yale English professor Michael Warner writes about the way that universities break students of disreputable reading habits. 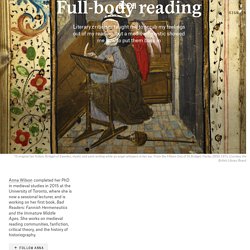 When students first enter the classroom, he writes: They identify with characters. The Psychology of What Makes a Great Story. “Stories,” Neil Gaiman asserted in his wonderful lecture on what makes stories last, “are genuinely symbiotic organisms that we live with, that allow human beings to advance.” 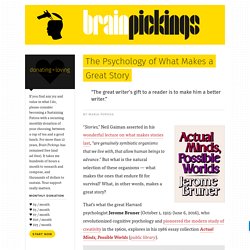 But what is the natural selection of these organisms — what makes the ones that endure fit for survival? What, in other words, makes a great story? The Magic of the Book: Hermann Hesse on Why We Read and Always Will. I recently decided to teach myself to write with my left hand. 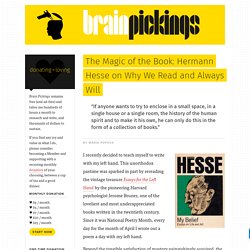 This unorthodox pastime was sparked in part by rereading the vintage treasure Essays for the Left Hand by the pioneering Harvard psychologist Jerome Bruner, one of the loveliest and most underappreciated books written in the twentieth century. Since it was National Poetry Month, every day for the month of April I wrote out a poem a day with my left hand. Ursula K. Le Guin on Power, Oppression, Freedom, and How Imaginative Storytelling Expands Our Scope of the Possible. When the stories add up: the six narrative arcs in fiction. Classic narratives. 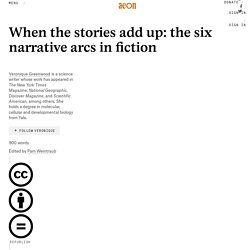 From Cinderella, 1950. Photo by Rex Features In recent years, literature has been getting attention from an unusual quarter: mathematics. Alongside statistical physicists analysing the connections between characters in the Icelandic sagas, and computer scientists exploring the life and death of words in English fiction, a team of mathematicians at the University of Vermont have now looked at more than 1,000 texts to see if they could automatically extract their emotional arcs. And their results show something interesting, not just about narratives, but also about using this approach to study literature. The Vermont researchers worked with test subjects to create a program capable of assigning emotional value – positive, negative or neutral – to words.

And indeed, according to the paper put up on ArXiv.org in June 2016, some patterns showed up again and again. Me, My Anger, and Jessica Jones – Electric Literature. Cold reading. Simplicity or style: what makes a sentence a masterpiece? A great sentence makes you want to chew it over slowly in your mouth the first time you read it. 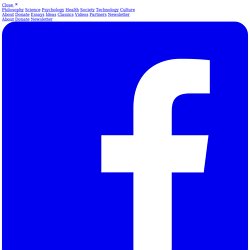 Simplicity or style: what makes a sentence a masterpiece? The Habits of Highly Productive Writers. Many writers I know love Joyce Carol Oates—some even refer to her as JCO, as if she were a brand as recognizable as CBS or BMW. 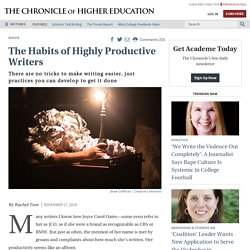 But just as often, the mention of her name is met by groans and complaints about how much she’s written. Her productivity seems like an affront. When someone’s doing a lot more than you, you notice it. It brings out your petty jealousy. And if you’re like me (occasionally petty and jealous), it might make you feel crappy about yourself. So I started to think about the practices of highly productive writers. They reject the notion of "writer’s block" the way others shun gluten. Productive writers don’t reach for excuses when the going gets hard. Research education, academic writing, public engagement, funding, other eccentricities. How to write paragraphs — Advice for authoring a PhD or academic book. In English the core building blocks of any intellectual or research argument are paragraphs.

Each paragraphs should be a single unit of thought, a discrete package of ideas composed of closely linked sentences. The most generally applicable sequence to follow is — Topic, Body, Tokens, Wrap. The opening ‘topic’ sentence alerts readers to a change of subject and focus, and cues readers (in ‘signpost’ mode) about what the paragraph covers. 30 tips for successful academic research and writing. Choosing something that you are passionately interested in to research is a great first step on the road to successful academic writing but it can be difficult to keep the momentum going. 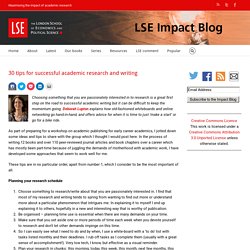 Deborah Lupton explains how old-fashioned whiteboards and online networking go hand-in-hand, and offers advice for when it is time to just ‘make a start’ or go for a bike ride. As part of preparing for a workshop on academic publishing for early career academics, I jotted down some ideas and tips to share with the group which I thought I would post here. In the process of writing 12 books and over 110 peer-reviewed journal articles and book chapters over a career which has mostly been part-time because of juggling the demands of motherhood with academic work, I have developed some approaches that seem to work well for me. Create a Moleskine PDA: The Student GTD Hack – Gathering In Light.

A couple weeks back I stumbled upon what seems like a small culture of people who have backed away from the “pure paperless ideology.” 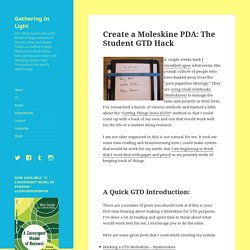 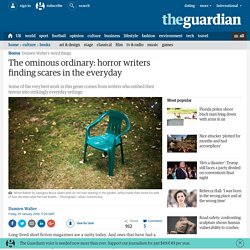 And ones that have had a real impact on the wider landscape of storytelling are even rarer. So issue 50 of Black Static marks a important milestone for editor Andy Cox and TTA Press, who are responsible for two of the world’s most significant outlets for short fiction. The Third Alternative was already a well-established showcase for stories that moved between sci-fi, fantasy and horror themes when Andy Cox took ownership of the legendary science fiction publication Interzone.