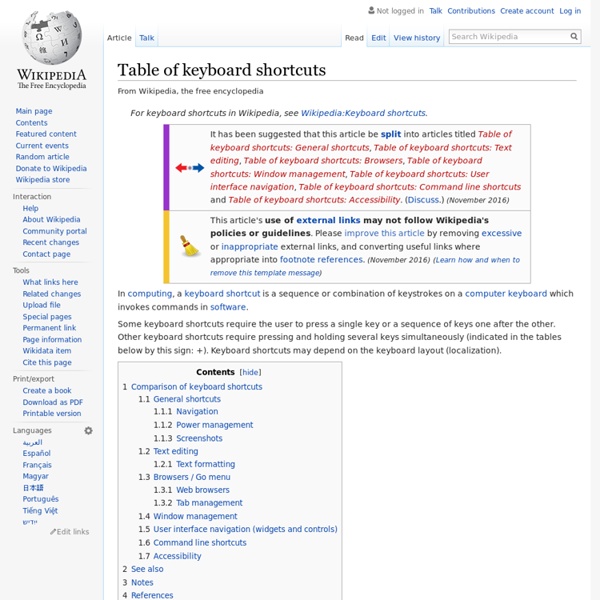 Cheap GPUs are rendering strong passwords useless Think that your eight-character password consisting of lowercase characters, uppercase characters and a sprinkling of numbers is strong enough to protect you from a brute force attack? Think again! Jon Honeyball writing for PC Pro has a sobering piece on how the modern GPU can be leveraged as a powerful tool against passwords once considered safe from bruteforce attack. Take a cheap GPU (like the Radeon HD 5770) and the free GPU-powered password busting tool called 'ighashgpu' and you have yourself a lean, mean password busting machine. How lean and mean?

An A-Z Index of the Bash command line Commands marked • are bash built-ins Many commands particularly the Core Utils are also available under alternate shells (C shell, Korn shell etc). More bash commands: Linux Command Directory from O'Reilly, GNU CoreUtils.SS64 bash discussion forumLinks to other Sites, books etc An evolutionary explanation for anorexia? An evolutionary instinct that told members of migrating populations to move along when their food supply ran out may be a major contributor to modern anorexia nervosa, according to a new theory. When food is scarce and starvation begins, most animals and people demonstrate intense hunger, low activity levels and a single-minded search for food. But, when starved, individuals with a genetic tendency toward anorexia feel sated, full of energy and unfazed by starvation--a set of symptoms described in the DSM-IV, says psychologist and Missoula, Mont. private practitioner Shan Guisinger, PhD, in an article published last year in Psychological Review (Vol. 110, No. 4). "In treating anorexics, I started to wonder if their symptoms could be something that was useful in the past," Guisinger explains. "When nomadic foragers were starving, it wouldn't make sense to hunker down and just not eat. A problematic adaptation

5 FREE Programs to make your computer (slightly) easier to use and look cool(ish) This is a neat little gizmo that sits on any side of the screen. In its original format, I found it slightly obtrusive (it covered up the tool bars). I used these solutions. Make it too small to obstruct the toolbars (I did this) Put it at the left of the screen (the right has the scroll bar)

UsingTheTerminal "Under Linux there are GUIs (graphical user interfaces), where you can point and click and drag, and hopefully get work done without first reading lots of documentation. The traditional Unix environment is a CLI (command line interface), where you type commands to tell the computer what to do. That is faster and more powerful, but requires finding out what the commands are." -- from man intro(1) Reference site GPS POIs Radars GpsPasSion aims to share news, reviews, thoughts and personalized assistance and discounts via the GpsPasSion Club on GPS Systems and Navigation Software for mobile platforms. GPS Receivers: Guide to Choosing a Receiver - Reviews - Chipsets and Receivers Compared - Accuracy Testing and SBAS / Software: Reviews - All-Terrain GPS - Picture Geocoding - World Map Database/ Community: Forums - Map of GpsPasSion Members

Lies and the Lying Liars who Spam it Bullshit rightwing spamming email: This article is from the "Investor's Business Daily." It provides some very interesting statistics from a survey by the United Nations International Health Organization. Percentage of men and women who survived a cancer five years after diagnosis: U.S.. 65% England 46% Canada 42% Percentage of patients diagnosed with diabetes who received treatment within six months: U.S.. 93% England 15% Canada 43% Percentage of seniors needing hip replacement who received it within six months: U.S.. 90% England 15% Canada 43% Percentage referred to a medical specialist who see one within one month: U.S.. 77% England 40% Canada 43% Number of MRI scanners (a prime diagnostic tool) per million people: U.S.. 71 England 14 Canada 18 Percentage of seniors (65+), with low income, who say they are in "excellent health": U.S.. 12% England 2% Canada 6% I don't know about you, but I don't want "Universal Healthcare" comparable to England or Canada .

Disassembling the Woolworths Facebook scam Who wants free stuff? C’mon, everybody wants a free lunch, right? Yes, yes they do and that’s precisely the trigger used in scams like this one. “Password” Remains Top Password, “Jesus” Cracks the Top 25 People: What are you doing? This is just getting sad now. Remember all of those password leak stories you’ve seen in the last few months?