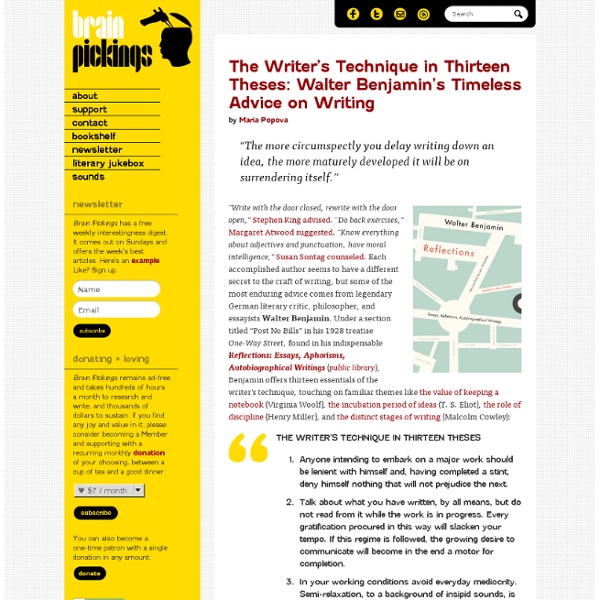 by Maria Popova “The more circumspectly you delay writing down an idea, the more maturely developed it will be on surrendering itself.” “Write with the door closed, rewrite with the door open,” Stephen King advised. “Do back exercises,” Margaret Atwood suggested. “Know everything about adjectives and punctuation, have moral intelligence,” Susan Sontag counseled. Each accomplished author seems to have a different secret to the craft of writing, but some of the most enduring advice comes from legendary German literary critic, philosopher, and essayists Walter Benjamin. THE WRITER’S TECHNIQUE IN THIRTEEN THESESAnyone intending to embark on a major work should be lenient with himself and, having completed a stint, deny himself nothing that will not prejudice the next.Talk about what you have written, by all means, but do not read from it while the work is in progress. Reflections is the companion volume to Benjamin’s equally essential Illuminations. Donating = Loving Share on Tumblr

The Science of "Chunking," Working Memory, and How Pattern Recognition Fuels Creativity by Maria Popova “Generating interesting connections between disparate subjects is what makes art so fascinating to create and to view… We are forced to contemplate a new, higher pattern that binds lower ones together.” It seems to be the season for fascinating meditations on consciousness, exploring such questions as what happens while we sleep, how complex cognition evolved, and why the world exists. Joining them and prior explorations of what it means to be human is The Ravenous Brain: How the New Science of Consciousness Explains Our Insatiable Search for Meaning (public library) by Cambridge neuroscientist Daniel Bor in which, among other things, he sheds light on how our species’ penchant for pattern-recognition is essential to consciousness and our entire experience of life. To illustrate the power of chunking, Bor gives an astounding example of how one man was able to use this mental mechanism in greatly expanding the capacity of his working memory. Donating = Loving

The 5 Best Pieces of Writing Advice I Didn't Get in School As readers of a site that welcomes and encourages submissions, there's a decent chance some of you want to be writers. Several months ago, I wrote an advice column on how to go about freelancing for the Internet and magazines, but some readers have their sights set on short fiction or even novels. And right now, some are contemplating education choices like picking a major or attending graduate school to get that MFA. photos.com"MFA" stands for "Master of Fine Arts" and should not be confused with the old porno Master of Fine Ass still available on VHS. Let me be clear: Education is wonderful. There is nothing you will ever learn that you will not ultimately use. How to Change Your Life: A User’s Guide ‘You will never change your life until you change something you do daily.’ ~Mike Murdock By Leo Babauta

Collection History The David Rumsey Map Collection was started over 25 years ago and contains more than 150,000 maps. The collection focuses on rare 18th and 19th century maps of North and South America, although it also has maps of the World, Asia, Africa, Europe, and Oceania. The collection includes atlases, wall maps, globes, school geographies, pocket maps, books of exploration, maritime charts, and a variety of cartographic materials including pocket, wall, children's, and manuscript maps. Items range in date from about 1700 to 1950s.

How to Write a Book In Your Spare Time Many people say they would like to write a book. That statement is usually in the form of “I have this great book idea”, “I’ve always wanted to write a novel” or “I will write it when I have more time.” I used to say things like that. 9 best sites with free ebooks for Google Play In this post you’ll learn about best websites with free ebooks that you will be able to add to your Google Play Books library. In June 2012 Google revealed that Gmail had over 400 million active users worldwide. If you own Gmail account, you don’t have to sign up to any other site to start collecting your own library of ebooks. These books will be stored “in the cloud”. That means you will be able to access them from any device, not only from your own computer. When we add ease of use and simplicity, Google Play Books may the a first choice for anyone who gets interested in ebooks.

Writers Workshop The Bonsai Story Tree Generator takes coherent text and turns it into... well, I'm not sure what. It's not GIGO (Garbage In, Garbage Out) -- it's more like QIGO (Quality In, Garbage Out). Only, the garbage often makes a sort of strange, surreal sense... Judge for yourself. :-) Why is it called the Bonsai Story Tree Generator? Okay, here's the history. Discussion Forums - Tamgas or not? Extraneous motifs on weavings Posted by James Blanchard on 03-30-2006 12:44 PM: Yomut mafrash - eagle symbol? Hi all, I recently picked up this Yomut mafrash in a small shop in a bazaar in New Delhi. Drawing Mental Illness: Artist Bobby Baker’s Visual Diary by Maria Popova Harvesting the daily flow of consciousness, or what group therapy has to do with marine life. Despite our proudest cultural and medical advances, mental illness remains largely taboo, partly because the experience of it can be so challenging to articulate. But when performance artist Bobby Baker was diagnosed with borderline personality disorder in 1996, followed by a breast cancer diagnosis, she set out to capture her experience and her journey to recovery in 711 drawings that would serve as her private catharsis over the course of more than a decade.