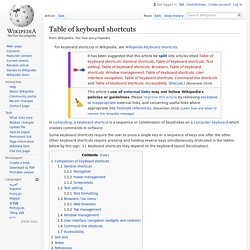 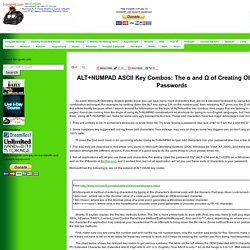 For example, by holding down the ALT key, typing 234 on the number pad, then releasing ALT gives you the Ω character. I'm writing this article mostly because when I search around for information on the topic of ALT+Number key combos I find pages that are lacking in details. Most of the pages I found are coming from the angle of using ALT+NUMPAD combinations as shortcuts for typing in non-English languages, but I have another use for them.

Using ALT+NUMPAD can make for some very ugly passwords to crack. 1. 2. I'll cover the 2nd point more in an upcoming article. 1. 2. Microsoft has the following to say on the subject of ALT+NUM key codes: Shortly I'll explain explain the first two methods further. Links: How to enter Unicode characters in Microsoft Windows. Alt Codes - How to make those Smiley Faces. For those who would like to know how to do the copyright symbol © or the Registered Trademark symbol ® or other things like funny faces etc. 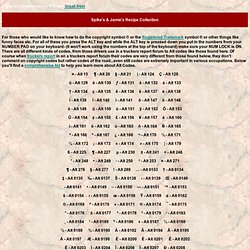 For all of these you press the ALT key and while the ALT key is pressed down you put in the numbers from your NUMBER PAD on your keyboard- (it won't work using the numbers at the top of the keyboard) make sure your NUM LOCK is ON. There are all different kinds of codes, from those drivers use in a truckers report forum to Alt codes like those found here. Of course when truckers report in on a truckers report forum their codes are very different from those found below, they don't comment on copyright codes but rather codes of the road...even still codes are extremely important in various occupations. Below you'll find a comprehensive list to help you learn more about Alt Codes. Typing with Non-english Keyboards (Penn State) Charmap - How to Insert Special Characters with Windows 7 Character Map - dummies. By Andy Rathbone Your computer keyboard has plenty of keys, but eventually you’ll need a special character that isn’t there. 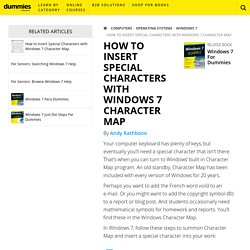 That’s when you can turn to Windows’ built-in Character Map program. An old standby, Character Map has been included with every version of Windows for 20 years. Perhaps you want to add the French word voilà to an e-mail. Or you might want to add the copyright symbol (©) to a report or blog post. In Windows 7, follow these steps to summon Character Map and insert a special character into your work: <img src=" width="490" height="415" alt="Character Map lets you insert special symbols into your documents or e-mail.

" You can grab several characters at a time by double-clicking each of them and then copying them all into your work as a group. Charmap - Character Map Windows 7/Vista. View Windows 2000 / NT Instructions The Character Map utility is free on all Windows machines and can be used to copy and paste accented letters and other foreign language characters characters into any Windows application. 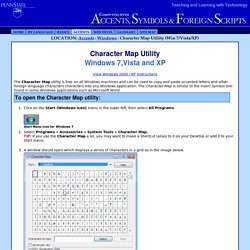 The Character Map is similar to the Insert Symbol tool found in some Windows applications such as Microsoft Word. To open the Character Map utility: Click on the Start (Windows Icon) menu in the lower left, then select All Programs. Start Menu icon for Windows 7 Select Programs » Accessories » System Tools » Character Map. Windows XP Character Map In the Character Map Make sure that the Font from the dropdown list matches that of the document you are creating.