Heroes of History - The Heroic Monomyth 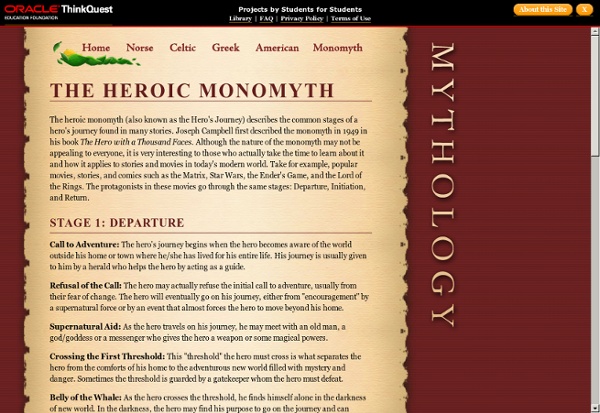 As of July 1, 2013 ThinkQuest has been discontinued. We would like to thank everyone for being a part of the ThinkQuest global community: Students - For your limitless creativity and innovation, which inspires us all. Teachers - For your passion in guiding students on their quest. Partners - For your unwavering support and evangelism. Parents - For supporting the use of technology not only as an instrument of learning, but as a means of creating knowledge. We encourage everyone to continue to “Think, Create and Collaborate,” unleashing the power of technology to teach, share, and inspire. Best wishes, The Oracle Education Foundation

Playtype | Typographer's Glossary Serif: Serif's are semi-structural details on the ends of some of the strokes that make up letters and symbols. A typeface that has serifs is called a serif typeface (or seriffed typeface). Some of the main classifications of Serif type are: Blackletter, Venetian, Garalde, Modern, Slab Serif, Transitional, and Informal. Fonts in each classfication share certain similiar characteristics including the shape or appearance of their serifs. Para Publishing - Welcome to Para Publishing How to Use Commonly Misused Words Steps Method 1 of 17: "Affect" and "Effect" 1Use “effect” as instructed."Effect" is a noun referring to something that happens as a result of something else. E.g., "The antibiotic had little effect on the illness.""Effect" is also a verb meaning to bring something about. 2Use “affect” as instructed.The verb "affect" means to change something in some way. Method 2 of 17: "Anxious" and "Eager" 1Use "anxious” as instructed.When followed by a gerund (the "–ing" verb form), anxiousness refers to anxiety, not pleasant feelings such as enthusiasm or excitement. 2Use “eager” as instructed.Eagerness conveys enthusiasm and is followed with an infinitive.Ex. Method 3 of 17: "Convince" and "Persuade" 1Use “convince” as instructed.Convince a person of the truth or validity of an idea.Follow “convince” with "that" or "of." 2Use “persuade” as instructed.Persuade a person to take action.Follow "persuade" with an infinitive (“to” and the verb).Ex. Method 4 of 17: "Could of" and "Could have" Tips Ad

201 Ways to Arouse Your Creativity Arouse your creativity Electric flesh-arrows … traversing the body. A rainbow of color strikes the eyelids. A foam of music falls over the ears. It is the gong of the orgasm. ~ Anais Nin Creativity is like sex. I know, I know. The people I speak of are writers. Below, I’ve exposed some of their secret tips, methods, and techniques. Now, lie back, relax and take pleasure in these 201 provocative ways to arouse your creativity. Great hacks from Merlin Mann of 43 Folders

Self publishing costs nothing A number of people have asked me “How much does self-publishing cost?”, so this post will clear that up. It may be controversial! Please do post comments if you disagree or have questions. Answer 1: It costs nothing Write book: $0 (but lots of time)Edit book: $0 Friend who is an English teacherProof-read book: $0 Friends and colleagues found on TwitterCover design: $0 Royalty free or own photos and text only made into a .jpg on Microsoft PublisherTypeset book: $0 done by self on Microsoft WordPublish book: Published as an Ebook on Smashwords for free and up for sale for US$4.99. Or it costs $10 for the print version:Publish book on Amazon.com by loading onto Lulu.com for free, and choosing the Published by Lulu option (for free). With these options, you have no pile of books sitting in your garage, no distribution to physical bookshops. This basic model is the one I now follow and will be teaching all the tricks of the trade in the author 2.0 program. Answer 2: It costs under $5000

Characters with Character: Random Personality Generator If you're enjoying the content here, check out our new site, Thoughtcrime Games. Thanks for visiting! If you're new here, you may want to subscribe to my RSS feed. I don’t know about you but when I sit down for a one-shot game with a pregen character, I can’t always come up with a unique and interesting personality on the fly. Using the Generator is a snap. Motivation: What is it that really gets your character’s motor running? Instinct: What is your character’s first reaction to a threat (physical or otherwise)? Approach: What archetype is your character best known for being? Now just because every character in D&D is combat-capable does not necessarily make them all warrior-type personalities. Carrion, Tiefling Earth WardenMotivation 3 (Information); Instinct 4 (Protect Others); Approach 10 (Disciplined Commander) Though the city of Bael Turath stands in ruins, much of the Tiefling heritage lies buried ignobly around the Known World. If you enjoyed this post, you may also enjoy:

20 Common Grammar Mistakes That (Almost) Everyone Makes I’ve edited a monthly magazine for more than six years, and it’s a job that’s come with more frustration than reward. If there’s one thing I am grateful for — and it sure isn’t the pay — it’s that my work has allowed endless time to hone my craft to Louis Skolnick levels of grammar geekery. As someone who slings red ink for a living, let me tell you: grammar is an ultra-micro component in the larger picture; it lies somewhere in the final steps of the editing trail; and as such it’s an overrated quasi-irrelevancy in the creative process, perpetuated into importance primarily by bitter nerds who accumulate tweed jackets and crippling inferiority complexes. Below are 20 common grammar mistakes I see routinely, not only in editorial queries and submissions, but in print: in HR manuals, blogs, magazines, newspapers, trade journals, and even best selling novels. Who and Whom This one opens a big can of worms. Which and That Lay and Lie This is the crown jewel of all grammatical errors. Moot Nor

(More) tips for writing well (Austin Govella at Thinking and Making) Published Wed, Jul 8, 2009 by Austin Govella. Updated Wed, Jul 8, 2009. As an editor, I’ve noticed several recurring bad habits you heathens would do well to disabuse yourselves of immediately. Almost without exception, these bad habits instantiate themselves as a series of stock phrases and constructions that reflect a lack of focus, a lack of fully developed argument, or the kind of intellectual laziness that sets in as you slog through your first draft. These things happen, That’s ok. 16 things to check when you edit Be vicious when you edit. 1. 2. 3. 4. 5. 6. 7. 8. 9. 10. 11. 12. 13. 14. 15. 16. After you edit… The finished piece should be so tight, terse, concise, and clear that it’s boring. Boring. Then sand off the rough edges. Write like you talk. The first 16 recommendations remove fluff and force you to think and communicate.

Writers' Workshop | Characterisation How to write convincing characters Characterisation - the task of building characters - isn't easy. But if you're struggling to build characters with real life and vigour, here is our very own patented technique. If you haven't yet started your book, then work on the exercise below before you start. If you have started, but think that maybe you started prematurely, then back up, do the exercise and then look back over your existing work. Oh, and don't feel patronised at being given exercises. Learning to know your characters Strong characterisation is based on knowledge. The Ultimate Character Builder Begin with a blank sheet (or screen). You should aim to cover at least five pages with this exercise. The less central a character is to your book, the less you need to know him/her. And the exercise will work. Checking your work Once you've got a fair way into your writing (say 5 to 10,000 words), then look back at it. Even genre fiction needs swiftly drawn, believable characters.

Getting NaNoWriMo Done: How to Write a Novel in 30 Days With November 1st almost upon us, NaNoWriMo is set to begin. There are plenty of tools to help budding novelists achieve the goal of 50,000 words in 30 days, but what about the reasons behind committing to such a daunting task in the first place? Surely, many of those taking on the challenge have other priorities that they have to deal with – myself included – so adding on the pressure of pushing through those commitments and the occasional bout of writer’s block is going to take herculean effort, right? Well, yes…and no. Just as there are many people who have yet to give NaNoWriMo a try, there are many who have – and have met the challenge while maintaining a modicum of their regular lives (and sanity) in the process. Set Up Rituals While Writing As a daily writer already, I’ve put in place rituals that draw me to the keyboard in a way that breeds productivity. Wash my face. Take Breaks Even though you’ve got a lot of writing to do, be sure to take plenty of breaks. Check In Frequently

Point of View in Creative Nonfiction | AndiLit.com I read a lot of novels, and poetry, and even the occasional screenplay/drama. I enjoy them; I learn from them; I find them delicate, and robust, and powerful, and skillful and all the things that make good writing. BUT when I want to really understand something, when I want to feel it in the center of my chest, when I want my cheeks to be rasped with the reality of life, I turn to creative nonfiction. There’s just something about the authenticity of the writer’s perspective there that makes me connect more fully. I’ve been trying to articulate the difference in connection I feel between fiction and nonfiction ever since my friend @karriehiggins were talking about it on Twitter the other night. We were discussing ownership in writing – as in who “owns” their perspective more? For me, creative nonfiction makes me more readily willing to identify with the narrator. What do you think? *That’s not to say writers in other genres aren’t profoundly honest and risky and vulnerable. Author: Andi

The heroic monomyth, as described in this article, is the common stages of a hero’s journey that most stories follow. The journey starts with the hero/heroine being called to adventure. At first the hero will deny the claim and refuse to partake in the adventure. Later, the hero will have to overcome a few trials and tribulations that will better their character and skill set. Finally, after all is said and done, the hero will reach an understanding with himself and will be able to live freely. This resource relates to the overall plot of Super Human in many ways. One way that it relates to the book is that many of the heroes or heroines follow these specific paths. When applied to the book as a whole, one is able to predict most of the outcomes of specific situations due to the precise alignment with the monomyth. by gregorypeters Dec 4