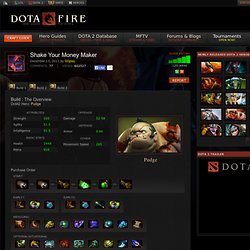 Pudge is a hero which is very dependent on the skill-level of the player. You could say this about every hero, but pudge needs a player who can predict enemy movement very well and land skillshotts with a very small "AoE"-Hitbox at long range. On the other hand Pudge is a rewarding hero if you play him well. If you like it vote. Pros / Cons Pros: 1. Skills. Lycanthrope Build Guide DOTA 2: Howl at the moon! In the Jungle, the Mighty Jungle! Updated 7/2/2013. Howl at the moon! 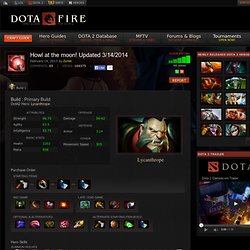 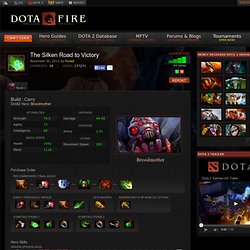 The preview for the 6.79 patch is viewable here: Here is how it pertains to broodmother: - Spin Web AoE increased from 650 to 900 - Spin Web cast range increased from 600 to 1000 - Spin Web cast point nerfed from 0.2 to 0.4 - Spin Web no longer destroys trees - Broodmother now has completely unobstructed movement when under the web (can walk over cliffs, trees, etc) - Removed buffer time when leaving Spin Web (you now immediately lose your regen/movement/pathing/invis bonuses) Quick Tips You just randomed Broodmother and you've got 40 seconds till gametime. . - Webs provide movement speed upon contact, stealth after 2 seconds, and allow you to pass over trees, cliffs, and units while on your web. . - Spiderlings, from. Riki Build Guide DOTA 2: Rikimaru Comes For You. Introduction Disclaimer: This guide is my most common build for my most commonly used Hero for Riki. 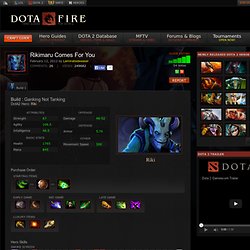 There are many builds for Riki, this is just my favorite and works very well for the way I play. Riki is a powerhouse carry that you love to have as an assist to a gank and hate to play against. Riki's damage can get out of hand very quickly if he is allowed to free-farm a lane. Playing Riki is based upon effectively taking advantage of opportunities to strike down individual opponents and/or support team battles with targeted single-target damage and smoke.

Early Game At the beginning of the game, Riki is an extremely fragile hero. Riki Build Guide DOTA 2: No longer- Stealth Assassin. Introduction Hello all. 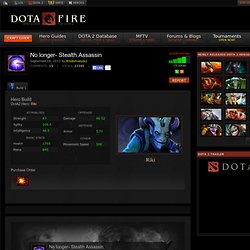 I have been on this site for a while now, reading guides and yelling at most of them as you may or may not have noticed. I had considered writing my own guides for a long time, on heroes I play avidly and well. Crystal Maiden, Shadow Shaman, Treant Protector, Lion, ect- usually global or heavy disable support heroes who need very little farm to be effective. Riki Build Guide DOTA 2: No longer- Stealth Assassin. Phantom Lancer Build Guide DOTA 2: The cancer lancer (Build 3) updated. The cancer lancer (Build 3) updated GGnet.AceJanuary 13, 2013 Introduction, Pros and cons Phantom Lancer is the definition of hard carry. 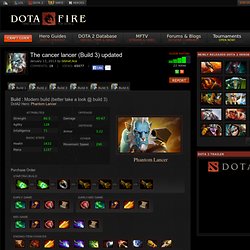 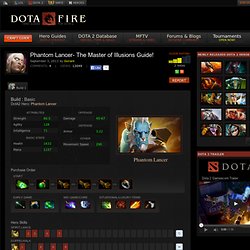 GonarkSeptember 3, 2013 Introduction Hey guys this is Gonark and this is my guide on Phantom Lancer. Phantom Lancer is an Agility carry hero who is also a decent pusher. Skills At level 1 you wanna get 1 level of Doppelwalk as its your only escape mechanism. Spirit Lance first will give you a bit of nuke as well as that precious slow. Juggernaut Build Guide DOTA 2: I'm the Juggernaut, bitch - Yurnero guide. I'm the Juggernaut, bitch - Yurnero guide SwordzNovember 17, 2011 Introduction A picture made by some cool chinese guy. 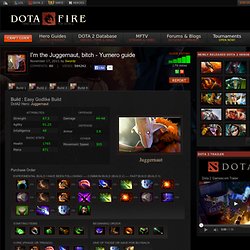 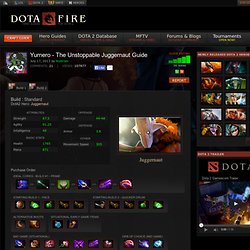 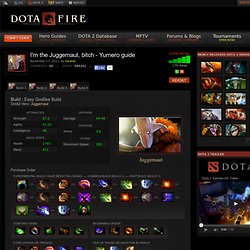 If you like this guide, consider checking out my youtube channel: I post videos about Dota 2 strategies, and other fun stuff regarding Dota. Silly boy, if you're here it's because you just picked the JUG OR NOT at random or something like that, and you don't know his true power. It's gonna be a fast and clear guide, i don't have much time to explain the stuff now, but i will add more giant informations if necessary. Juggernaut Build Guide DOTA 2: Yurnero - The Unstoppable Juggernaut Guide. Huskar DOTA 2 Hero Guides on DOTAFire. Inner Vitality Unlocks the regenerative power of a friendly unit, with healing based upon its primary attribute....

Burning Spear Huskar sets his spears aflame, dealing damage over time with his regular attack. Multiple attacks... Berserker's Blood Huskar's injuries feed his power, giving increased attack speed and magic resistance for each 7%... Life Break Huskar draws upon his health to break an enemy's life, leaping at a target within attack range to... Emerging from the throes of the sacred Nothl Realm, Huskar opened his eyes to see the prodigal shadow priest Dazzle working a deep incantation over him.

Talking about his skills, Jinada helps a lot in the laning phase since will make last-hitting, the most difficult thing to pull out against a proper trilane, much easier; Shadow Walk is the key of his solo laning power because it makes the enemies spend gold on. Spirit Breaker Build Guide DOTA 2: Succint Guide to Spirit Breaker. Succint Guide to Spirit Breaker DamonPrinc3June 10, 2013 Intro All guides: AM, SB, Weaver, Axe Hello. DotA is constantly evolving and the best DotA players are those that can adapt. I've been playing DotA for about 9 years on and off and have had DotA 1 league experience on platforms like Bored Aussie, Garena, DotAlicious etc. - DhampirKnight Items Memo Purchase orders aren't a one size-fits all games thing and the best sequence will change from game to game. Stout Shield Has become a must for almost all melee heroes who want to be serious about doing well in laning stage. Power Treads Self explanatory. Spectre Build Guide DOTA 2: Spectre the Alternative Guides (ANTI alt-tab)

Spectre the Alternative Guides (ANTI alt-tab) Sp12September 1, 2012 Introduction I'm Sp12 -- I write guides here and can be found streaming at if you have any questions/comments feel free to post at either. I'm regularly in the top 10 pages in the watch tab -- maybe you've seen my play. This is a collection of playstyles/builds for Spectre. Spectre Build Guide DOTA 2: The every man Spectre build. Introduction This is the guide to playing Spectre better than your average pub player. Many Spectre players don't take advantage of how deadly she can be in the mid game and hopefully this guide will inspire you to play a more active Spectre.