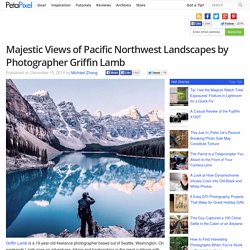 On weekends Lamb goes on adventures, hiking and backpacking in the great outdoors with his friends. Over the years, he has built up quite an impressive portfolio of breathtaking landscape photographs that capture the beauty of the Pacific Northwest. Lamb tells us that he shoots with a Canon 6D and a 17-40mm f/4 lens at f/8 “in order to get as much in focus as possible.” Resulting photos are processed in Lightroom 5 and VSCO Film (usually the 01 series). @mr007 Instagram photos. Earlier. 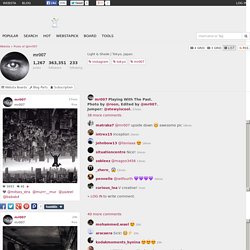 Fartbasel on Instagram. Doug Beach’s Videos. Katerina Plotnikova. Beautifully edgy photography from London-based Tung Walsh. With a portfolio bursting with fashion, editorial and portrait photography, it’s no surprise Tung Walsh’s client list is constantly growing having shot for big-wigs including A.P.C, Dolce and Gabbana, BON and W magazine among others. 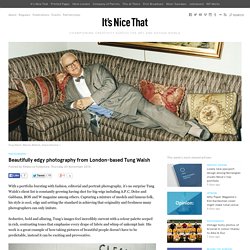 This Drone-on-a-Leash is Hoping to Become the Aerial Photographer's Best Friend. Aerial photography drones are more ubiquitous than ever. 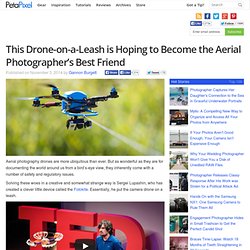 But as wonderful as they are for documenting the world around us from a bird’s-eye view, they inherently come with a number of safety and regulatory issues. Solving these woes in a creative and somewhat strange way is Sergei Lupashin, who has created a clever little device called the Fotokite. Essentially, he put the camera drone on a leash.

In the six-and-a-half minute video above, Lupashin explains the events that inspired the creation of the drone, why he sees drones as a vital part of our world and, most intriguingly, what this device actual is and how it works. Below is one of the first test flights shared by the Fotokite team: While this product is yet to hit the market for consumers, the Fotokite team say they’re working hard to do just that. 150 artists transform tunisian village into an open air art museum. Nov 03, 2014 150 artists transform tunisian village into an open air art museum 150 artists transform tunisian village into an open air art museumall images courtesy of djerbahood creatives from more than 30 countries have come together to participate in the ‘djerbahood‘ project on the island of djerba, tunisia, which has seen the transformation of the historic village into a vibrant open air art museum. 150 street artists have left their mark on the ancient city’s walls and doors, infilling the town with both large and small-scale murals for both inhabitants and tourists to experience and enjoy. stencils, paintings, graffiti, and monumental works canvassing buildings’ facades are a few of those scattered throughout the landscape, with community and culturally influenced works adorning the urban sites. from the sky — aerial footage of the street art installationsvideo courtesy of djerbahood mural by american artist swoon. 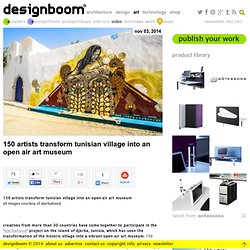 Steve Schofield Photographer. Resource Magazine Beards VS. Cancer - No Shave November Is Coming - Resource Magazine. With Halloween candy ready to be handed out and temperatures cooling down, the month of October is officially coming to an end. 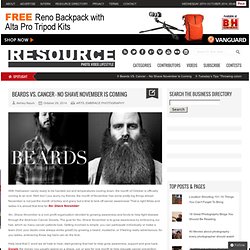 Well don’t you worry my friends, the month of November has some pretty big things ahead. November is not just the month of turkey and gravy but a time to kick off cancer awareness! That is right fellas and ladies it is almost that time for No- Shave November! No- Shave November is a non-profit organization devoted to growing awareness and funds to help fight disease through the American Cancer Society. The goal for No- Shave November is to grow awareness by embracing our hair, which so many cancer patients lose. Vivian Maier: A Photographer Found and a New Exhibit. Vivian Maier obsessively documented the world around her from the 1950s to 1990s. 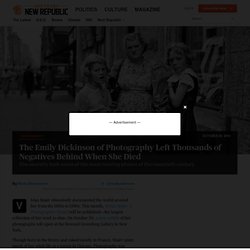 This month, Vivian Maier: A Photographer Found will be published—the largest collection of her work to date. On October 30, a new exhibit of her photographs will open at the Howard Greenberg Gallery in New York. Though born in the Bronx and raised mostly in France, Maier spent much of her adult life as a nanny in Chicago. Photography was never her profession, but rather a largely secret passion. At her first nannying job in Chicago, she developed her photographs in a bathroom. Maier died in Chicago in 2009, essentially anonymous as an artist and photographer. Below, several “lifetime” prints, printed before Maier’s death, soon on view at the Howard Greenberg Gallery. 2014 OUTDOOR Urban Art Festival in Rome. At the recent private preview of the OUTDOOR Urban Art Festival in Rome, we were approached by two men in their 60s while we stood outside of the massive gates of an abandoned house in San Lorenzo. 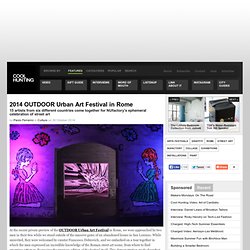 While uninvited, they were welcomed by curator Francesco Dobrovich, and we embarked on a tour together in which the men expressed an incredible knowledge of the Roman street art scene, from where to find emerging artists to discussing the previous edition of the festival itself. This demonstration made clear that the festival is a very present institution in town. Sidetracked Magazine: Adventure Travel. Spirited travelers know the value of immersing oneself in the unknown. 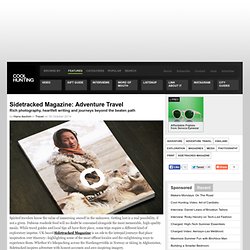 Getting lost is a real possibility, if not a given. Dubious roadside food will no doubt be consumed alongside the most memorable, high-quality meals. While travel guides and local tips all have their place, some trips require a different kind of exploratory impetus. NEWS — NICK GENTRY. Jeff Chien-Hsing Liao’s Immaculate and Impossible New York. If you look closely enough, you may just find yourself in one of Jeff Chien-Hsing Liao’s incredible photographs of New York City. 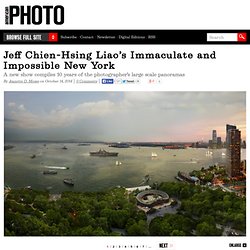 The photographer has spent the last decade trekking across the city’s five boroughs and methodically photographing the diverse architecture and personalities using both a large and medium format camera. A new show, Jeff Chien-Hsing Liao’s New York: Assembled Realities, which opens tomorrow at the Museum of the City of New York, features over 40 of the large-scale panoramic photographs showcasing the beauty and grit of the urban landscape. Although Liao’s view of the city is immaculate, it is also completely impossible. He has captured images of spaces that no longer exist physically (like Shea Stadium and 5 Pointz) but also spaces that never actually existed at all—at least not in the way he presents them. “New York City is the most photographed city in the world and there are too many good photographs already made,” he says. Expand. Seven Designers of the Future at La Rinascente. Each year during Milan Design week, SaloneSatellite is the area of Salone del Mobile devoted to emerging designers and schools.

iWear – Wearable Apple Device by Sunfer Ho. The Apple iWear With the Apple Watch announcement, many an inspirational designs in concept Apple wearables have been dashed. The real thing is sleek and very Jony Ive, however the battery life and longevity is still questionable. The iWear came in as a refreshing approach that now questions the possibility of making an iPad-esque wearable. No more watch … let’s have a look… Photography and the Feelings of Others: From Mirroring Emotions to the Theory of Mind.

Photography is powerful because we can place ourselves into the perspective of those we see in an image. Whether it’s street photography, photojournalism or portraiture, we use photography to understand ourselves in relation to people around us. Photographer Rachel Sussman Journeys Around the Globe in Search of the Oldest Living Organisms. Petcam: A New Book of Delightful Photos Taken by Pets from Around the World. Fritz, Tabby Cat, Hartenstein, Germany Taken by Fritz. 7 Novelty Photo Products That Should Not Exist - Amateur Photographer. Some photo-themed products are genuinely clever ideas that make great little novelty gifts.