The Hall of Heroes

Robert Burns. BackgroundRobert Burns was born on 25 January 1759 in the village of Alloway in Ayrshire. 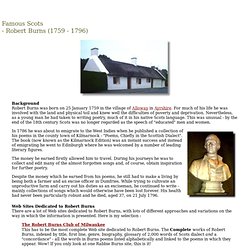 For much of his life he was involved with the land and physical toil and knew well the difficulties of poverty and deprivation. Nevertheless, as a young man he had taken to writing poetry, much of it in his native Scots language. Rabbie Burns. Thomas Carlyle. Thomas Carlyle. Thomas Chalmers. Born in Anstruther in Fife on March 17, 1780, Chalmers was educated at St Andrews University (he began there at the age of 11) and at the age of 23 he was both minister at Kilmeny and a science lecturer at the university. 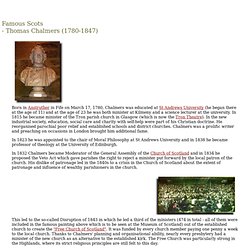 In 1815 he became minister of the Tron parish church in Glasgow (which is now the Tron Theatre). In the new industrial society, education, social care and charity with self-help were part of his Christian doctrine. He reorganised parochial poor relief and established schools and district churches. Chalmers was a prolific writer and preaching on occasions in London brought him additional fame. 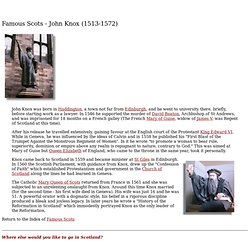 In 1546 he supported the murder of David Beaton, Archbishop of St Andrews, and was imprisoned for 18 months on a French galley (The French Mary of Guise, widow of James V, was Regent of Scotland at this time). After his release he travelled extensively, gaining favour at the English court of the Protestant King Edward VI. While in Geneva, he was influenced by the ideas of Calvin and in 1558 he published his "First Blast of the Trumpet Against the Monstrous Regiment of Women". In it he wrote "to promote a woman to bear rule, superiority, dominion or empire above any realm is repugnant to nature, contrary to God. " John Knox. Dr David Livingstone. Born in Blantyre in 1813, David Livingstone was the son of a shopkeeper. 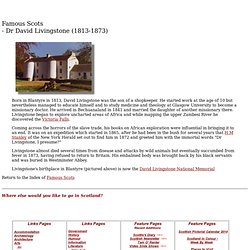 He started work at the age of 10 but nevertheless managed to educate himself and to study medicine and theology at Glasgow University to become a missionary doctor. He arrived in Bechuanaland in 1841 and married the daughter of another missionary there. Livingstone began to explore uncharted areas of Africa and while mapping the upper Zambesi River he discovered the Victoria Falls. Coming across the horrors of the slave trade, his books on African exploration were influential in bringing it to an end. It was on an expedition which started in 1865, after he had been in the bush for several years that H M Stanley of the New York Herald set out to find him in 1872 and greeted him with the immortal words "Dr Livingstone, I presume? 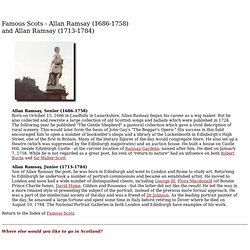 But he also collected and rewrote a large collection of old Scottish songs and ballads which were published in 1724. The following year he published "The Gentle Shepherd" a pastoral collection which gave a vivid description of rural scenery. This would later form the basis of John Gay's "The Beggar's Opera. " Allan Ramsay. Sir Walter Scott. Born in Edinburgh, the ninth child of a lawyer, Scott contracted polio as a child which left him with a permanent limp. 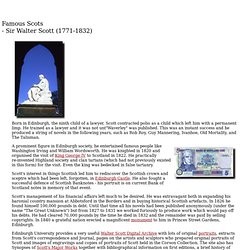 He trained as a lawyer and it was not unt"Waverley" was published. This was an instant success and he produced a string of novels in the following years, such as Rob Roy, Guy Mannering, Ivanhoe, Old Mortality, and The Talisman. A prominent figure in Edinburgh society, he entertained famous people like Washington Irving and William Wordsworth. He was knighted in 1820 and organised the visit of King George IV to Scotland in 1822. He practically re-invented Highland society and clan tartans (which had not previously existed in this form) for the visit. Walter Scott. Adam Smith. Adam Smith. Robert Tannahill.