Jonathan Haidt on the moral roots of liberals and conservatives 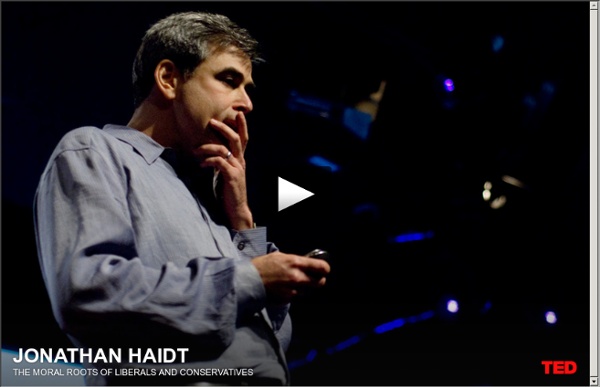 Why Privacy Matters Even if You Have 'Nothing to Hide' - The Chronicle Review By Daniel J. Solove When the government gathers or analyzes personal information, many people say they're not worried. "I've got nothing to hide," they declare. "Only if you're doing something wrong should you worry, and then you don't deserve to keep it private." Shawn Achor Shawn Achor is the winner of over a dozen distinguished teaching awards at Harvard University, where he delivered lectures on positive psychology in the most popular class at Harvard. Shawn has become one of the world’s leading experts on the connection between happiness and success. His research on happiness made the cover ofHarvard Business Review, his TED talk is one of the most popular all time with over 4 million views, and his lecture airing on PBS has been seen by millions. Shawn teaches for the Advanced Management Program at Wharton Business School, and collaborates on research with Yale and Columbia University.

TEDTalks Have you ever wondered: Am I a human being? Ze Frank suggests a series of simple questions that will determine this. Please relax and follow the prompts. Let's begin ... TEDTalks is a daily video podcast of the best talks and performances from the TED Conference, where the world's leading thinkers and doers give the talk of their lives in 18 minutes (or less). VicesAreNotCrimes Vices Are Not Crimes A Vindication Of Moral Liberty Vices are those acts by which a man harms himself or his property. Crimes are those acts by which one man harms the person or property of another.

The Hidden Message in Pixar’s Films I love Pixar. Who doesn’t? The stories are magnificently crafted, the characters are rich, hilarious, and unique, and the images are lovingly rendered. Without fail, John Ratzenberger’s iconic voice makes a cameo in some boisterous character. What You Can't Say January 2004 Have you ever seen an old photo of yourself and been embarrassed at the way you looked? Did we actually dress like that? We did. And we had no idea how silly we looked.

How to create a self-fulfilling prophesy. (article) THERE IS A CIRCULAR, self-feeding loop in many aspects of human nature, and you can use them to your advantage — or disadvantage. In many of these self-feeding loops, your thoughts play a major role. For example, a person with indigestion (caused by stress) notices a pain in his stomach, and then worries that maybe something is seriously wrong with him. The worry increases his level of stress, which increases the pain in his stomach, which makes him worry all the more, etc. To predict what will make you happy, ask a stranger rather than guessing yourself Want to know how much you’d enjoy an experience? You’re better off asking someone who has been through it, even if they’re a complete stranger, than to find out information for yourself. This advice comes from Daniel Gilbert from Harvard University, who espoused it in his superb book Stumbling on Happiness. Now, he has found new support for the idea by studying speed-daters and people receiving feedback from their peers. In the first study, he found that female students were better able to predict how much they would enjoy a speed-date if they listened to the experiences of strangers than if they make their own assessments based on available information. Likewise, the second study found that people more accurately foresaw their reactions to criticism when they knew how someone else had reacted than when they had the information for themselves.

The parable of the ox In 1906, the great statistician Francis Galton observed a competition to guess the weight of an ox at a country fair. Eight hundred people entered. Galton, being the kind of man he was, ran statistical tests on the numbers. The Benefits of Optimism Are Real - Emily Esfahani Smith Heart rates rapidly increased. Arteries constricted. Blood pressure shot up. Then, participants were shown a short video clip that either evoked negative emotions (like sadness), positive emotions (like happiness), or a neutral condition of no emotions.

OPINION: Will censoring the Internet stop child exploitation? NOTE: I got to put my thoughts to John Carr directly when I was invited to debate the issues raised on the JVS Show on BBC Three Counties radio on Monday morning. Here is the link to listen again. We come on at the 1 hour mark… I think the link is only live for seven days so grab it while it’s hot! Binaural Beats: Digital Drugs The science behind binaural beats: What they are, what they are claimed to do, and what they can actually do. by Brian Dunning Filed under Alternative Medicine, Consumer Ripoffs Skeptoid Podcast #147 March 31, 2009 Podcast transcript | Download | Subscribe Also available in Russian Listen: Today we're going to put on our headphones, kick back in the beanbag, and get mellow to the soothing sounds of the latest digital drug: binaural beats.