Dan Ariely on the Truth About Dishonesty, Animated 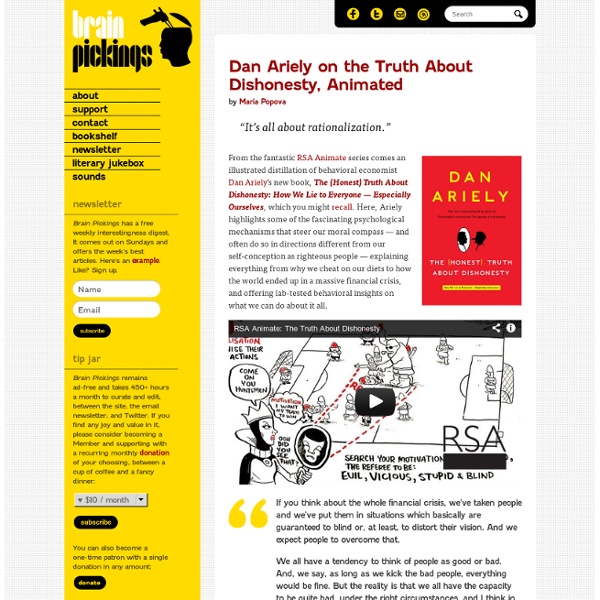 John Cleese on the 5 Factors to Make Your Life More Creative by Maria Popova “Creativity is not a talent. It is a way of operating.” Much has been said about how creativity works, its secrets, its origins, and what we can do to optimize ourselves for it. Space (“You can’t become playful, and therefore creative, if you’re under your usual pressures.”)Time (“It’s not enough to create space; you have to create your space for a specific period of time.”)Time (“Giving your mind as long as possible to come up with something original,” and learning to tolerate the discomfort of pondering time and indecision.)Confidence (“Nothing will stop you being creative so effectively as the fear of making a mistake.”)Humor (“The main evolutionary significance of humor is that it gets us from the closed mode to the open mode quicker than anything else.”) A few more quotable nuggets of insight excerpted below the video. Creativity is not a talent. We need to be in the open mode when pondering a problem — but! Thanks, Simon Donating = Loving Share on Tumblr

The Psychology of Trust in Life, Learning, and Love by Maria Popova The science of why tit-for-tat isn’t the best strategy for cooperation and why you should hear out your hunches. “When you trust people to help you, they often do,” Amanda Palmer asserted in her beautiful meditation on the art of asking without shame. But what does it really mean to “trust,” and perhaps more importantly, how can we live with the potential heartbreak that lurks in the gap between “often” and “always”? That’s precisely what psychologist David DeSteno, director of Northeastern University’s Social Emotions Lab, explores in The Truth About Trust: How It Determines Success in Life, Love, Learning, and More (public library). DeSteno, who has previously studied the osmosis of good and evil in all of us and the psychology of compassion and resilience, argues that matters of trust occupy an enormous amount of our mental energies and influence, directly or indirectly, practically every aspect of our everyday lives. The short answer is that we have to.

MOOCs – The Opium of the Masses “MOOCs are the sigh of the oppressed creature, the heart of a heartless world, and the soul of soulless conditions. They are the opium of the people. The abolition of MOOCs as the illusory happiness of the people is the demand for their real happiness.” (Modification of Karl Marx, Critique of Hegel’s Philosophy of Right) Replacing "Religion" with MOOC in the quote above should give a pretty clear indication of where this post is heading. There is a confluence of circumstances at play in the United States right now, culminating with the President’s recent State of the Union call to reduce the cost of higher education, that is sending one of our most important and progressive social institutions on a crash course directly back to the Industrial Age, mass-production model that we have struggled to escape for so long. (Storming of the Bastille and arrest of the Governor M. de Launay, July 14, 1789. Massive is Not Better Masses, massive, mass-production.

The Psychology Of Starbucks Alice G. Walton puts the coffeehouse on the couch: [T]he coffee house plays the central role of “Third Place” in our lives – home being the first and work being the second – and Starbucks has always been vocal about its desire to be this third place for its customer. What’s interesting is that humans actually really need this place, and we’ve needed if for practically our whole existence, according to some. About 20 years ago, Ray Oldenburg, PhD, who wrote a book called The Great Good Place, argued that there are a number of attributes that make a third place a third place: It has to be convenient, inviting, serve something, and have some good regulars (which, he says, is actually more important than having a good host). Recent store renovations seem to discourage sitting for too long: “Changing the business model from third places to speed lane stops will not change the underlying human psychological need,” says Suzanne Roff, PhD, an industrial psychologist.

Hackschooling Jason, what's with the John Lennon quote? It's a great quote, but unless someone has explicitly told you otherwise, it has nothing to do with Logan any more than it has to do with your story above; which might be fine less the need to somehow single out your obsession with John Lennon (who's great but your making big reaches; not a good sign). It's not really necessary to try and make a great link in the specific way you have, between a good historical quote and some necessity by Logan to somehow tell the audience; "Hey, everything I've done is from John Lennon." It's not of course; maybe Logan hasn't listened to a Beatles song in his entire life. Maybe he has, but don't presume what you don't know and don't reach too far. If you read-up, Logan re-wrote his entire talk he had worked on for some 60 days, just prior to this TEDx event because he wasn't quite happy with it and asked others for advice. Finally, I have to address this privilege thing you refer to.

Trying Not to Try: How to Cultivate the Paradoxical Art of Spontaneity Through the Chinese Concept of Wu-Wei by Maria Popova “Our modern conception of human excellence is too often impoverished, cold, and bloodless. Success does not always come from thinking more rigorously or striving harder.” “The best way to get approval is not to need it,” Hugh MacLeod memorably counseled. We now know that perfectionism kills creativity and excessive goal-setting limits our success rather than begetting it — all different manifestations of the same deeper paradox of the human condition, at once disconcerting and comforting, which Edward Slingerland, professor of Asian Studies and Embodied Cognition at the University of British Columbia and a renowned scholar of Chinese thought, explores in Trying Not to Try: The Art and Science of Spontaneity (public library | IndieBound). Our lives, Slingerland argues, are often like “a massive game of Mindball,” when we find ourselves continually caught in this loop of trying so hard that we stymie our own efforts. Art by Austin Kleon from 'Show Your Work.' Share on Tumblr

Q&A: What the Brain Reveals About the Self — And Self Control With the Obama administration planning a major initiative to map the brain, there’s more attention focused on what all of that new information will mean for how we see ourselves and how we take moral and legal responsibility for our actions. David Eagleman, a neuroscientist who directs Baylor College of Medicine’s Initiative on Neuroscience and Law and the bestselling author of Incognito: The Secret Lives of the Brain, provided some insights into what neuroscience can do for us. Do you think there is a ‘real you’? If somebody makes a racist or anti-Semitic remark, is that what he really thinks, but hides most of the time because it’s not socially acceptable? I think when we talk about a person and we use some sort of name or an identity, what we’re really talking about is something like the running average. Let’s take a different case. What’s the difference? Presumably, though, most of us would prefer not to have racist words or ideas in our heads… That’s a good example. Quite right.

Studying the Brain Can Help Us Understand Our Unscientific Beliefs Editors’ Note: Portions of this post appeared in similar form in a December, 2009, piece by Jonah Lehrer for Wired magazine. We regret the duplication of material. Last week, Gallup announced the results of their latest survey on Americans and evolution. What’s most remarkable about these numbers is their stability: these percentages have remained virtually unchanged since Gallup began asking the question, thirty years ago. Such poll data raises questions: Why are some scientific ideas hard to believe in? A new study in Cognition, led by Andrew Shtulman at Occidental College, helps explain the stubbornness of our ignorance. This means that science education is not simply a matter of learning new theories. To document the tension between new scientific concepts and our pre-scientific hunches, Shtulman invented a simple test. As expected, it took students much longer to assess the veracity of true scientific statements that cut against our instincts.