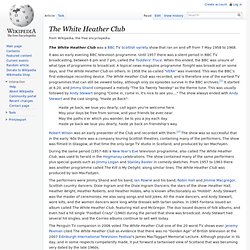 Haste ye back, we loue you dearly, call again you're welcome here. May your days be free from sorrow, and your friends be ever near. May the paths o'er which you wander, be to you a joy each day. Haste ye back we loue you dearly, haste ye back on friendship's way. White Heather Club with Andy Stewart Part 1. Andy Stewart - The White Heather Club. White Heather Group theatre poster from the Edinburgh Empire 1960 In 1957 BBC Scotland producer Iain MacFadyen, who had taken over the production of Andy's radio show 17 Sauchie Street, returned from the BBC's "Television" course in London (a course many radio producers took, allowing them to branch out into TV production) and produced his first television programme; the 1957 into '58 Hogmanay show. 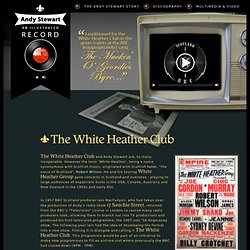 The following year Iain had the idea of developing the format into a new show, filming it in Glasgow and calling it The White Heather Club. This programme would be part of an initiative to make new programmes to fill an airtime slot where previously the BBC had closed down (6PM - 7PM). The format Iain devised would be a half-hour televised céilidh, presented by Robert Wilson and featuring a resident troupe of Scottish Country Dancers and the best accordion bands of the day. New Year Auld Lang Syne. BBC One - Hogmanay Live, 2010, The White Heather Club. White Heather Club (Jig) Theme Song. Scottish Traditional Music Hall of Fame. Ian Powrie is one of Scottish country dance music’s best-loved figures, with a band sound and fiddle style that were instantly recognisable as his own. 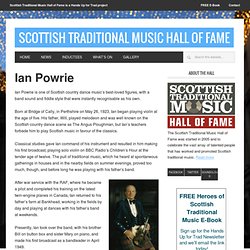 Scottish Traditional Music Hall of Fame. Few musicians’ names become interchangeable with the style of music they play in the way that Jimmy Shand came to define Scottish Country Dance music to the broader audience. 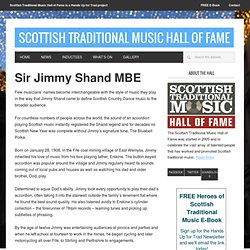 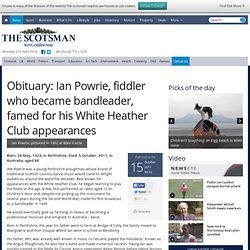 Died: 5 October, 2011, in Australia, aged 88 IAN Powrie was a young Perthshire ploughman whose brand of traditional Scottish country dance music would come to delight audiences around the world for decades. Best known for appearances with the White Heather Club, he began learning to play the fiddle at the age of five, first performed on radio aged 12 on Children’s Hour and, despite not picking up the instrument for several years during the Second World War, made his first broadcast as a bandleader in 1949. He would eventually give up farming, in favour of becoming a professional musician and emigrate to Australia – twice. Born in Perthshire, the year his father went to farm at Bridge of Cally, the family moved to Blairgowrie and then Coupar where Ian went to school at Bendochy. His father, Will, was already well known in music circles and played the melodeon.

He thought that was simply due to inexperience and said he would contact his recording manager. Scottish Traditional Music Hall of Fame. John Carmichael is one of the great characters of the Scottish music scene and one of the music’s most dedicated advocates through his work as a musician, performer, bandleader, television producer, accordion teacher and competition adjudicator. 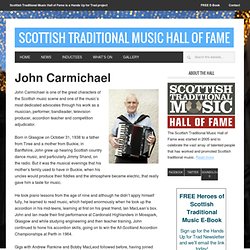 Born in Glasgow on October 31, 1938 to a father from Tiree and a mother from Buckie, in Banffshire, John grew up hearing Scottish country dance music, and particularly Jimmy Shand, on the radio. But it was the musical evenings that his mother’s family used to have in Buckie, when his uncles would produce their fiddles and the atmosphere became electric, that really gave him a taste for music. He took piano lessons from the age of nine and although he didn’t apply himself fully, he learned to read music, which helped enormously when he took up the accordion in his mid-teens, learning at first on his great friend, Ian MacLean’s box. For more information visit John’s website. British 1950s TV and Radio. Ch 8. Chapter 08 – Television (Pg 23 – 24) I often wonder at the influence of television, in particular ‘The White Heather Club’, on both the public and the bands taking part. 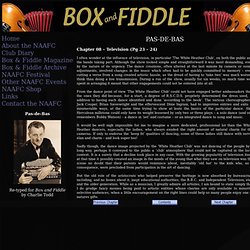 Although the show looked simple and straightforward it was most demanding, even by the nature of its urgency. The dance creations, often altered at the last minute by camera or sound adjustments, involved changes in the music which often had to be quickly committed to memory – even cutting a verse from a song created artistic hassle, as the dread of having to ‘take two’ was much worse I think than doing a live transmission. During a run of the show, usually for six weeks, so much time was spent in arranging it meant that other engagements could not be entered into at all. 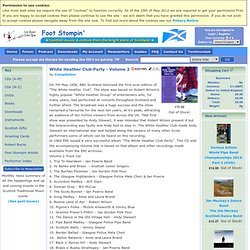 The show was based on Robert Wilson's highly popular "White Heather Group" of entertainers who, for many years, had performed at concerts throughout Scotland and further afield. The broadcast was a huge success and the show remained a favourite for the next ten years, at it's peak, attracting an audience of ten million viewers from across the UK. That first show was presented by Andy Stewart, it was intended that Robert Wilson present it but the telerecording was faulty and Andy had to step in. The White Heather Club made Andy Stewart an international star and helped along the careers of many other Scots performers some of whom can be heard on this recording. 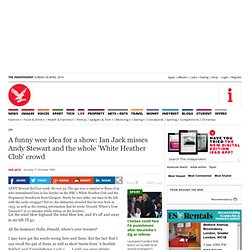 All the lassiescry Hallo, Donald, where's your troosers? I may have got the words wrong here and there. But the fact that I can recall the gist of them, as well as short bursts from 'A Scottish Soldier' and 'Campbeltown Loch' ( . . . I wish you were whisky, Campbeltown Loch, och aye), is a large testament to the man who sang and wrote them. A low opinion of The White Heather Club. DESPITE being (or perhaps because I am) an ardent fan of Scottish traditional music and dance, I agree wholeheartedly with Jeff Evans's opinion of The White Heather Club. 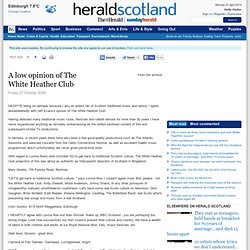 Having attended many traditional music clubs, festivals and ceilidh dances for more than 50 years I have never experienced anything as remotely embarrassing as the stilted sanitised content of this and subsequent similar TV productions. In fairness, in recent years there have also been a few good-quality productions such as The Atlantic Sessions and selected concerts from the Celtic Connections festival, as well as excellent Gaelic music programmes which unfortunately are never given prime-time slots.

With regard to Lovina Roe's wish (October 25) to get back to traditional Scottish culture, The White Heather Club projection of this was about as authentic as Hollywood's depiction of Scotland in Brigadoon. Mary Gowrie, 159 Paisley Road, Renfrew. Colin Gordon, 81/5 North Meggetland, Edinburgh. Well done, Dunoon - great Mod. Kilroy-Silk's quiz show and Celebrity Wrestling 'worst TV shows' » Communities. The stars lined up for Celebrity Wrestling Robert Kilroy-Silk's short-lived quiz show and Celebrity Wrestling have been deemed two of the worst programmes to have made it on to British TV.

Authors of The Penguin TV Companion have trawled through the last six decades to find the shows which should never have been aired. From the 1950s they picked the BBC's About the Home, which ran for eight years from 1951 and demonstrated how women could improve their cookery, needlework, shopping and even puppy training skills.