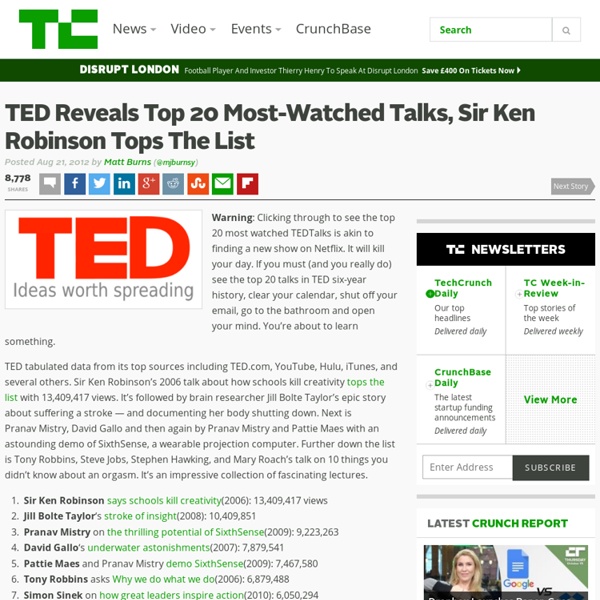 The 10 Best TED Talks of 2011 Watching videos online is usually considered fun, but generally a waste of time. Not so with TED videos, which are uniformly interesting, educational, inspiring, and enjoyable. If you haven't spent much time (or any) checking out TED videos, you should – and to help with that, I've compiled what seem to be the very best 10 TED videos of 2011. It was a grueling task, combing through the cream of the crop on the TED site, but somebody had to do it. Some of the talks may have been filmed prior to 2011 but all of the talks here were posted in 2011. How I Became 100 Artists You don't need to be an artist to appreciate Shea Hembrey's "How I became 100 artists," but if you are it's even more amazing. A Modern Take on Piano, Violin, Cello If music is more your thing, then the "Modern Take on Piano, Violin, Cello" entry from the Ahn Trio is a must-watch (and listen). 3 Things I Learned While My Plane Crashed Learning experiences like this, I could do without. How to Spot a Liar Your Favorites?

www.pearltrees.com/carmeeeee_rs 13 Alternative Search Engines That Find What Google Can’t Advertisement R.I.P Google. What would be your first reaction if you saw this? Scared, because your life is completely enslaved to Google. Or, hopeful because this suggests that something better has already arrived? Well, no one is chipping on that digital tombstone yet. But it does not mean that there is no grass outside that fence. These Search Engines Do What Google (Still) Can’t Some are worthy contenders for the second-place medallion while some are just go into those niche corners of the web. 1. Google does good for the world in its own way. Read through their FAQ where they open up about the project and also show you the progress of their planting programs. 2. Open your bag of privacy tools to add Qwant to the collection of no-tracking search engines. Even when you are connected with an ID, we don’t use any cookie nor any other tracking device when you browse the site. Local storage on your machine is used to save your settings and data. 3. 4. 5. 6. Let’s talk about kids. 7. 8. 10.

Viral videos Richard has appeared in countless television and radio programmes, including ABC’s 20/20, NBC’s Dateline, BBC Radio 4′s The Today Programme, and BBC2′s The Culture Show. In addition, he has devised bespoke studies for several television programmes, including National Geographic’s Brain Games 2 and The History Channel’s Your Bleeped Up Brain. Richard has created more viral videos than anyone else in the UK. His Quirkology YouTube channel has over 1 million subscribers and received over 200 million views, and he has created online content for Derren Brown’s The Events, the launch of CBS’s The Mentalist, and Transport For London. We have produced a DVD containing high quality versions of many of the videos from the Quirkology channel, and this is used in training seminars and college lessons across the world. One of his most recent videos, Assumptions, explores the power of perspective….

Bill Gates: 13 Talks That Expanded My Worldview To stress the importance of malaria research, Bill Gates famously unleashed mosquitos on the audience in the first of his three TEDTalks. So which talks jolted him into action? When we asked Gates to curate a list of his favorites, his response was, “There are too many to pick, really.” Hans Rosling: Stats that reshape your worldview Michael Specter: The danger of science denial David Christian: The history of our world in 18 minutes Melinda Gates: Let’s put birth control back on the agenda Bruce Aylward: How we’ll stop polio for good Atul Gawande: How do we heal medicine? Steven Pinker: The surprising decline in violence Nathan Myhrvold: Could this laser zap malaria Salman Khan: Let’s use video to reinvent education Blaise Aguera y Arcas demos Photosynth David Blaine: How I held my breath for 17 min. Susan Cain: The power of introverts Vijay Kumar: Robots that fly … and cooperate