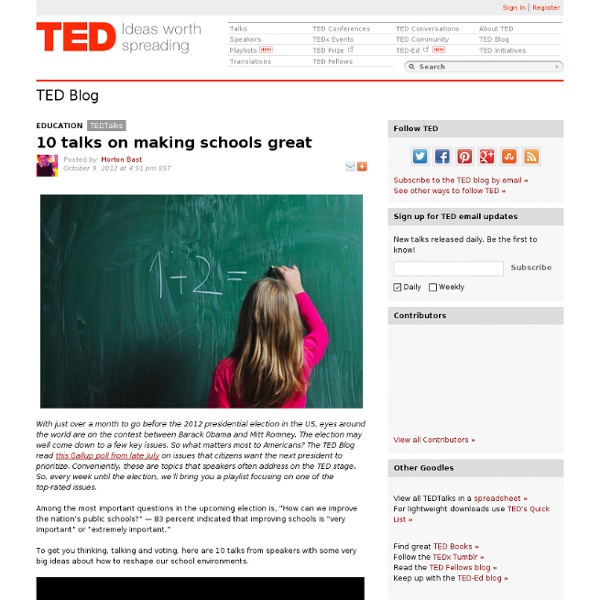 With just over a month to go before the 2012 presidential election in the US, eyes around the world are on the contest between Barack Obama and Mitt Romney. The election may well come down to a few key issues. So what matters most to Americans? Among the most important questions in the upcoming election is, “How can we improve the nation’s public schools?” To get you thinking, talking and voting, here are 10 talks from speakers with some very big ideas about how to reshape our school environments. Sir Ken Robinson: Bring on the learning revolution! Emily Pilloton: Teaching design for change Education challenges can be met with design solutions, says Emily Pilloton. Stephen Ritz: A teacher growing green in the South Bronx Inveterate educator Stephen Ritz saw his students getting more unhealthy by the year, so sprang into action and created The Green Bronx Machine. Dan Meyer: Math class needs a makeover No problem worth solving comes in a simple formula, says math teacher Dan Meyer.

There is no one You'er than You! 4 works from John Maeda that explore the intersection of technology, art and design John Maeda still remembers a parent-teacher conference from when he was a child. Maeda beamed with pride as his teacher told his father, “John is good at math and art.” However, the next day, when Maeda’s father recounted the conference to a customer at his store, all he remembered was, “John is good at math.” Maeda, now the President of the Rhode Island School of Design, shares in this hilarious talk from TEDGlobal 2012 that one of the central questions of his life became: “Why did dad not say ‘art?’” Maeda’s studies in math and computing took him to MIT, his father’s dream. “I began to think about the computer as a spiritual place of thinking. To see Maeda’s human computer and hear his ideas on how design can inform leaders, watch his wonderful talk. Commute (2003)This Technicolor image was created for Maeda’s exhibition, FOOD, and it is made out of Jell-O. Text squeezer (2007)Texting is all about shorthand. .

eggs for teaching Let’s have a conversation about mental health: How Sarah Caddick curated “Misbehaving Beautifully” On the TEDGlobal 2012 stage this summer, guest curator Sarah Caddick hosted the session “Misbehaving Beautifully,” a deep dive into a near-taboo subject: mental health and mental illness. Today, Oct. 10, happens to be World Mental Health Day, and TED.com is premiering the final talk Sarah curated for the stage, Ruby Wax’s “What’s so funny about mental illness?” As this final talk becomes available for viewing, we asked Caddick to reflect on creating the session — as well as on the conversations that happened afterward. Below, a note from Sarah. It’s a wrap … Mission: create a story that is compelling and challenging, that takes people on a journey while ensuring each piece is significant enough that it can be sent out alone into the vast expanse of the world to tell its own tale. And now each story from within the journey is out there, the last making itself known loudly with funny sketches, a colorful soft clay brain and a serious message.

I LOVE MY JOB The next evolution of schools: Highlights from our chat with Will Richardson What will schools look like in 25 years? Educator and parent Will Richardson sees profound changes beginning to bubble up in classrooms around the world. In the past, knowledge was bounded — both in books and in classrooms. But today, the internet provides nearly endless learning opportunities for anyone who is interested. In the TED Book Why School? Muhammad Hafiz asked: How would you suggest reforming education — changing it from the traditional one to the modern one — in developing countries? Richardson responded: It’s a great question, Muhammad, because access is at the heart of the learning explosion. Wm Chamberlain asked: I am sitting with my class waiting for the buses to arrive to take them home. We need to change schools but not do away with the powerful learning that happens in physical space, in face-to-face classrooms. Ryan Gallwitz asked: Richardson responded: That’s a long answer, but there is a book that captures much of that thinking titled The Third Teacher. Why School?

Calvin getting creative! Previously on the internet … with Lisa Bu Every week at TED’s New York office, one media team staffer shares a handful of things on the web that intrigued, shocked or amused them. We call it: Previously on the Internet. Here are this week’s finds, from Lisa Bu, TED’s Content Distribution Manager. Fact-check politiciansLisa, who was born in China and has spent the past nine years becoming a United States citizen, can’t understand why Americans are so passive about voting. She is obsessed with PolitiFact.com’s Truth-O-Meter, which verifies political statements and doles out ratings like “Pants on Fire.” Be a goal-getterLisa loves the site StickK.com, which acknowledges that sometimes you need a little help reaching a personal goal. Congressional watchdogOn the same note, Lisa keeps up with what is going on in the Senate and House of Representatives. See today’s front pagesEveryday, the Newseum’s website features 881 newspaper front pages from 90 countries, a great way to see what is going on across the globe.

How I feel most mornings Why aren’t we asking the big questions? A Q&A with Ruby Wax One in four people have some form of mental illness, and Ruby Wax wants to talk about it. Watch her TEDTalk, posted today and inspired by her show Losing It, to start the conversation. One project she didn’t get to mention onstage at TEDGlobal: This winter, Wax started up the Black Dog Tribe, an online network for people with mental illness to connect to each other. So the TED Blog asked Ruby for more about the Black Dog, her next show, performing in mental institutions, and the big questions that we still can’t talk about. Who’s the Black Dog? The Black Dog is familiar because Churchill used to say it. Because Churchill himself was depressed, do you find that it’s a more accepted condition in the UK? No. What I found when I was doing my show was, when people can talk about mental illness, they’re so relieved. There’s no AA for depression. We can tell our own. Really, if it’s 1 in 4 people, they should have a checklist. What do we all want to know: How far are we off the scale of normal?

Playlist: 6 beautiful talks by data artists In the information age we have access to more data and knowledge than at any previous point in human history. But more accessible data doesn’t necessarily mean more processable data — tax returns, court cases and newspaper archives may be available to the public, but they are often hard to interpret and understand. Data artists process this mess of information for us and break it down into comprehensible pieces, often enhancing it by placing it in deeper contexts and by finding surprising patterns. The designers and artists below are on the cutting edge of this work, experimenting with new technologies to take numbers and facts and turn them into beautiful multimedia works of art and knowledge. Nathalie Miebach: Art made of stormsNathalie Miebach’s art is both beautiful and informative: she sculpts colorful models using weather data, and then converts this information into musical scores. Aaron Koblin: Artfully visualizing our humanityNumbers can humanize us.