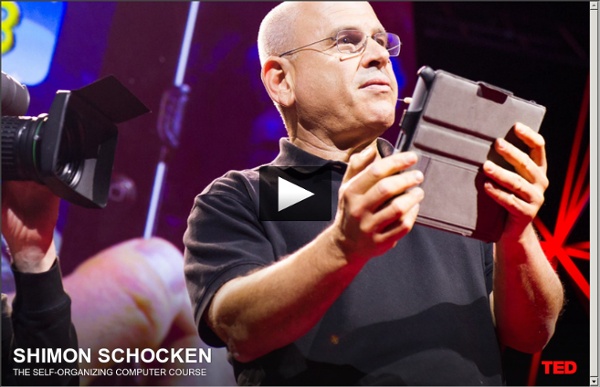 Brilliant 10: Greg Nielson Shrinks Solar Cells To The Size Of Glitter Greg Nielson pushes a small jar full of rubbing alcohol across his desk at Sandia National Laboratories in New Mexico. In the jar float shiny solar cells the size of glitter. "If you have panels of these on top of Walmart, you get twice as much power [as conventional photovoltaics] and your costs go down by half," he says. For the past six years, Nielson has worked to dramatically reduce the size of solar cells in order to make them more durable, efficient, and cost-effective. When the Utah native arrived at Sandia in 2004, Nielson was one of the world's leading Greg NielsonAge 38Sandia National Laboratoriesresearchers of optical microelectro-mechanical systems—technology that uses light to drive tiny machines.

U.S. Schools Need More STEM Training, Better Broadband CIO — U.S. Education Secretary Arne Duncan on Friday renewed the administration's call for super-fast broadband connections in schools and a greater focus on education in the STEM subjects of science, technology, engineering and math. In a video address to participants in Maker Camp, an online summer camp for teenagers, Duncan hailed the virtual program, saying that "it shows the power of online learning." STEM and ConnectED Top White House Agenda Duncan's message underscores two initiatives the administration has undertaken, one to improve STEM education and another, ConnectED, that the White House launched in June with a goal of connecting 99 percent of the nation's schools and libraries to high-speed broadband service.

Wireless power for the price of a penny? The newspaper-style printing of electronic equipment has led to a cost-effective device that could change the way we interact with everyday objects. For a price of just one penny per unit the device, known as a rectenna, which is presented August 10, in IOP Publishing's journal Nanotechnology, can be placed onto objects such as price tags, logos and signage so that we can read product information on our smartphones with one simple swipe. This type of technology, which is known as near-field communication (NFC), has already been implemented to allow fast money transactions; however, this new device could lead the way to large-scale adoption at a low cost. The rectenna, created by researchers from Sunchon National University and Paru Printed Electronics Research Institute, could be implemented onto everyday objects so that they can harness the power given off by the smartphone's radio waves and send information back to it via printed digital circuits.

Growing Bipartisan Support for ConnectED Last week, the President issued a new challenge for our nation – one that families, businesses, school districts and the federal government can rally around together – to connect virtually every student with access to cutting-edge technology as part of a competitive, 21st century education. The new ConnectED initiative he announced was a bold, transformative vision for America’s schools, ensuring that they have access to high-speed broadband and wireless internet to expand connectivity to more schools and libraries over the next 5 years. ConnectED will bring high-speed Internet within reach for tens of millions of America’s kids – and with it, it empowers more teachers and schools to harness the power of digital learning. As President Obama said in Mooresville, NC last week, “these are the tools that our children deserve.”

Discovery in synthetic biology takes us a step closer to new 'industrial revolution' Scientists report that they have developed a method that cuts down the time it takes to make new 'parts' for microscopic biological factories from 2 days to only 6 hours. The scientists, from Imperial College London, say their research brings them another step closer to a new kind of industrial revolution, where parts for these biological factories could be mass-produced. These factories have a wealth of applications including better drug delivery treatments for patients, enhancements in the way that minerals are mined from deep underground and advances in the production of biofuels. Professor Paul Freemont, Co- Director of the Centre for Synthetic Biology and Innovation at Imperial College London and principle co-investigator of the study, which is published February 1 in the journal Nucleic Acids Research, says: "Before the industrial revolution most items were made by hand, which meant that they were slower to manufacture, more expensive to produce and limited in number.

What is ConnectED? Ed. note: To highlight the importance of connected classrooms, the White House held a virtual "show and tell" with three schools that are embracing technology and digital learning. Watch the full hangout at wh.gov/show-and-tell. President Barack Obama and Health and Human Services Secretary Kathleen Sebelius, right, talk with students while visiting a classroom at the Yeadon Regional Head Start Center in Yeadon, Pa., Nov. 8, 2011. With mind-reading speller, free-for-all conversations that are silent and still Researchers have come up with a device that may enable people who are completely unable to speak or move at all to nevertheless manage unscripted back-and-forth conversation. The key to such silent and still communication is the first real-time, brain-scanning speller, according to the report published online on June 28 in Current Biology, a Cell Press publication. The new technology builds on groundbreaking earlier uses of fMRI brain scans to assess consciousness in people described as being in an unconscious, vegetative state and to enable them to answer yes and no questions. fMRI (or functional magnetic resonance imaging) is typically used for clinical and research purposes to track brain activity by measuring blood flow.

Nathan Heller: Is College Moving Online? Gregory Nagy, a professor of classical Greek literature at Harvard, is a gentle academic of the sort who, asked about the future, will begin speaking of Homer and the battles of the distant past. At seventy, he has owlish eyes, a flared Hungarian nose, and a tendency to gesture broadly with the flat palms of his hands. He wears the crisp white shirts and dark blazers that have replaced tweed as the raiment of the academic caste. His hair, also white, often looks manhandled by the Boston wind.