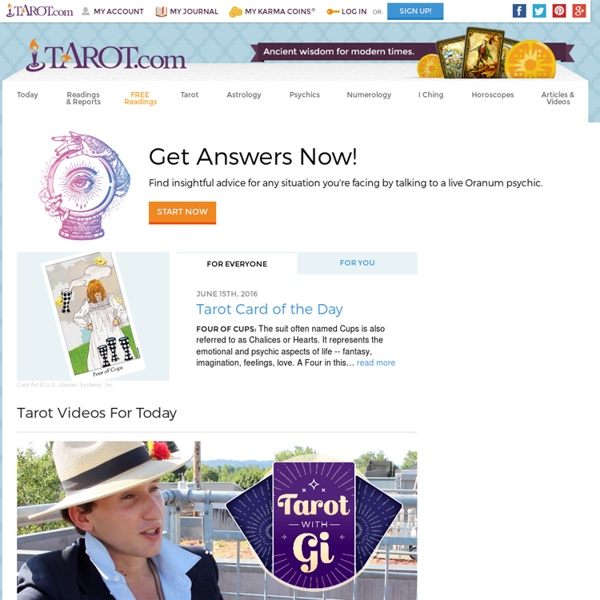 Phases of the Moon Enter a year between 1700 and 2035 in the form below and press the "Get Data" button to obtain a calendar showing the dates of the primary phases of the Moon for that year. Definitions For definitions of the phases, see the explanation of Phases of the Moon and Percent of the Moon Illuminated in the Astronomical Information Center. In addition, the explanation of Crescent Moon Visibility discusses the waxing crescent phase. Tarot Meditations All Rights Reserved. These mediations may work best with a BOTA (Paul Foster Case) or Rider Pack (Waite) Tarot Deck. Fool Meditation 9/30/75 Adapted from "Understanding the Tarot", column six, by Bill Heidrick (First published in "Gnostica") Mercury Retrograde Dos and Don'ts There is one golden rule when it comes to Mercury Retrograde phases. Interestingly enough, it's grammatical. If you can commit this simple tenet to memory then you'll find that retrograde cycles of Mercury are not only easier to navigate, but also rich with potential for growth and personal development. Ready class? Here's the rule.

Astrology & the Chakras In this article I would like to explore the exciting possibility of bridging two of history's greatest psychological systems -- astrology and the chakras. Conventionally, these two systems have been seen as having little or nothing to do with each other, the former primarily concerning the outer world, or macrocosm, and the latter involving the inner world, or microcosm. In fact, as we shall soon see, these two systems are but two sides of the same coin, each one complementing the other and thus enhancing our understanding of both. The basic system of correspondences I will be using here is drawn from teachers I have studied with in the Kriya Yoga lineage.1 The general system of "chakric horoscopes" and their guidelines for interpretation are my own, developed over more than a decade of working with these basic correspondences.

Metatron's Cube Focus your attention for a moment on the elements contained within the yellow triangle below. You can see the rectangle, the pentagon and the hexagon. That's 3, 4, 5 and 6 sided figures. Symbols This page presents a glossary and some discussion of a wide variety of different types of symbols used on tarot cards, to serve as a convenient reference for tarot readers and students. Click on a topic below to go directly to that section. I.

7 Tips for Buying a Tarot Deck Buying your first tarot deck is a wonderful experience. There is the excitement of exploring the unknown, of having answers to your burning questions, and of learning a new discipline. And today, there is the benefit of having a large variety of tarot decks to choose from (e.g., Celtic, Wiccan, fairy, Zen, Native American, goddess-centered, mythological, and traditional). For a beginner, it can be quite overwhelming to choose from such a variety of options.