Prepaid cards - US bank hacker faces long jail term. Image copyright AP A Turkish man alleged to have masterminded the theft of more than $55m (£39m) has pleaded guilty in a US court. 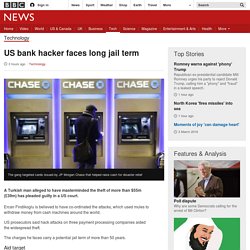 Ercan Findikoglu is believed to have co-ordinated the attacks, which used mules to withdraw money from cash machines around the world. US prosecutors said hack attacks on three payment processing companies aided the widespread theft. The charges he faces carry a potential jail term of more than 50 years. The gang won access to computer networks let them inflate balances and remove withdrawal limits on pre-paid debit cards. Copied cards were then used to withdraw money via cash machines in a series of co-ordinated operations carried out between 2010 and 2013. One operation by the gang went after cards issued by JP Morgan Chase that helped the American Red Cross raise money for disaster relief. Findikoglu pleaded guilty to several different charges including "computer intrusion conspiracy" for leading the hacking spree. T-Mobile wants to be a bank with new checking accounts for customers. 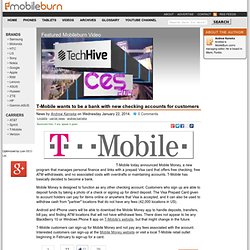 T-Mobile has basically decided to become a bank. Mobile Money is designed to function as any other checking account. Customers who sign up are able to deposit funds by taking a photo of a check or signing up for direct deposit. The Visa Prepaid Card given to account holders can pay for items online or anywhere that Visa is accepted, and it can also be used to withdraw cash from "partner" locations that do not have any fees (42,000 locations in US). Android and iPhone users will be able to download the Mobile Money app to handle deposits, transfers, bill pay, and finding ATM locations that will not have withdrawal fees. Wal-Mart checking accounts part of a growing low-cost banking trend. Wal-Mart Stores, the nation’s retailer, is jumping into banking with the help of Green Dot, which also provides prepaid debit cards to the chain. 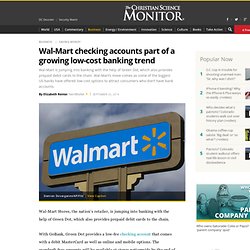 With GoBank, Green Dot provides a low-fee checking account that comes with a debit MasterCard as well as online and mobile options. The overdraft-free accounts will be available at stores nationwide by the end of October. While a fee of about $3 is required initially, a monthly charge of almost $9 can be avoided by having at least $500 in direct deposits made during the period, Green Dot’s website says.

Wal-Mart’s long-expected move comes as some of the biggest U.S. banks have offered low-cost options to attract consumers who don’t have bank accounts, a surprisingly large group. Government estimates suggest as many as 17 million American adults fit this description, handling most of their financial transactions with prepaid debit cards and using pricey alternatives such as payday lenders and pawnshops when funds run short. GoBank specifics. Banks barreling into the prepaid debit card market. These efforts offer potential legitimacy to an industry that has existed in the shadows for decades with less government oversight and a reputation for high fees. 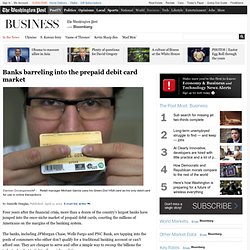 Some regulators see the market shift as an opportunity to address the growing population of people who have no access to the banking system. But the industry’s explosive growth, and large banks’ push into the market, has left some consumer advocates worried that low-income consumers will be trapped outside the banking system without the protections inherit in traditional checking and savings accounts. Younger Customers More Likely to Consider Prepaid: Survey. Can the Payday Loan Be Reinvented? There's been some speculation that payday lending is set to have a big year. 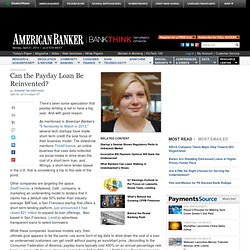 And with good reason. As mentioned in American Banker's "8 Nonbanks to Watch in 2013," several tech startups have made short-term credit the sole focus of their business model. How a Few Simple Controls Could Have Prevented $45 Million Bank Heist. The international ATM heist that lifted $45 million two Middle Eastern banks could have been prevented had better security controls been in place at the card processors, the ATMs and the banks involved, observers say. 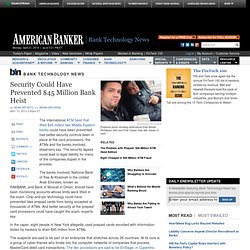 The security lapses could lead to legal liability for many of the companies duped in the process. The banks involved, National Bank of Ras Al-Khaimah in the United Arab Emirates, known as RAKBANK, and Bank of Muscat in Oman, should have been monitoring accounts whose limits were lifted in the scam. Chip-and-pin technology could have prevented fake prepaid cards from being accepted at thousands of ATMs.

Banks Can Do Well Doing Right by Underbanked. Editor's note: A version of this post originally appeared on LinkedIn. 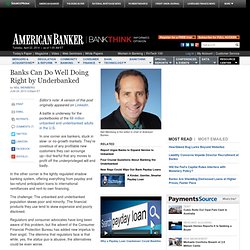 A battle is underway for the pocketbooks of the 68 million unbanked and underbanked adults in the U.S. In one corner are bankers, stuck in slow- or no-growth markets. They're covetous of any profitable new customers they can scrounge up—but fearful that any moves to profit off the underprivileged will end badly. In the other corner is the lightly regulated shadow banking system, offering everything from payday and tax-refund anticipation loans to international remittances and rent-to-own financing. The challenge: The unbanked and underbanked population skews poor and minority. Regulators and consumer advocates have long been aware of this problem, but the advent of the Consumer Financial Protection Bureau has added new impetus to their angst. That risk is likely to rise as regulators press ahead with a current clampdown on payday loans, cash remittances, prepaid cards and other products.

There is good news. Chase s Prepaid Card Makes Inroads with Underbanked. EMV Could Make Prepaid Cards Prohibitive to Issue, Unless. While it's hard to deny that chip cards are more secure than magnetic stripe cards, it's equally hard to deny they cost more, too. 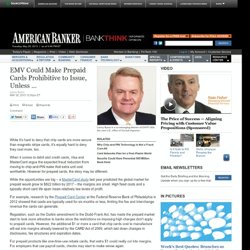 When it comes to debit and credit cards, Visa and MasterCard argue the expected fraud reduction from moving to chip-and-PIN make that extra unit cost worthwhile. However for prepaid cards, the story may be different. While the opportunities are big – a MasterCard study last year predicted the global market for prepaid would grow to $822 billion by 2017 – the margins are small. High fixed costs and a typically short card life span mean relatively low levels of profit. 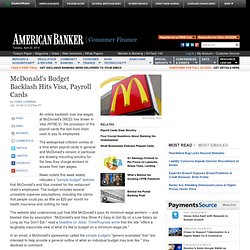 The widespread criticism comes at a time when payroll cards in general and McDonald's version in particular are drawing mounting scrutiny for the fees they charge workers to access their own wages. News outlets this week widely ridiculed a "sample budget" website that McDonald's and Visa created for the restaurant chain's employees.

The budget includes several unrealistic expense assumptions, including the claims that people could pay as little as $20 per month for health insurance and nothing for heat. The website also underscores just how little McDonald's pays its minimum-wage workers — and blasted Visa by association. In an email, a McDonald's spokesman called the sample budgets "generic examples" that "are intended to help provide a general outline of what an individual budget may look like. "