13. What's your sign? Discover the world of signs and symbolic meanings. Runes, Alphabet of Mystery. Esoteric Texts & Archives. Kabbala 101. Tarot of the Absurd — Post Card. Beautifully Illustrated Lord of the Rings Tarot Card Deck. Lord of the Rings Characters Depict Various Tarot Cards Entities Portraying the aesthetics of the movie “Lord of the Rings,” deviantArt user Sceith Ailm has illustrated a collection of tarot cards with popular characters from the movie. 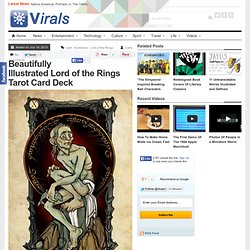 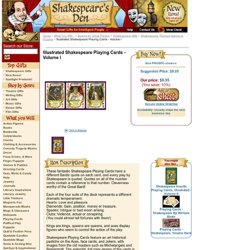 Quotes on all of the number cards contain a reference to that number. Cleverness worthy of the Great Bard! Each of the four suits of the deck represents a different dramatic temperament: Hearts: Love and pleasure. Diamonds: Gain, position, money or treasure. Spades: Intrigue or bad moon arising. Kings are kings, queens are queens, and aces display figures who seem to control the action of the play. Shakespeare Playing Cards feature an art historical pastiche on the Aces, face cards, and Jokers, with images from the old masters such as Michelangelo and Rembrandt. Shiva Imports. Royo Dark Tarot Deck : Cards : Lo Scarabeo, Luis Royo : 9780738733616. 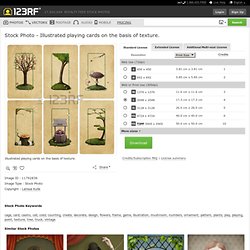 The plane, puppy and two trees Illustration or greeting card.. Imaginary toy town and train... Set of fifteen vintage cards for.. Snow meadow, decorated with green.. Dummy with scissors. Beautiful girl with cards Green tree with red apples, caterpillar.. Christmas background with decorated.. Mailbox in winter forest Fabulous.. Mailbox with Christmas gifts in.. Greeting card on Valentine's.. Vase with grapes and vines frame. Ace of Spades - Steve Simpson. 10 OF CLUBS - GIGART. Deck Interview with The Witches Tarot by Ellen Dugan. When I got my Amazon voucher the other week (finally, after years of advertising on the blog!) 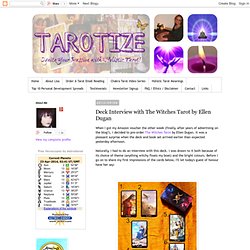 , I decided to pre-order The Witches Tarot by Ellen Dugan. It was a pleasant surprise when the deck and book set arrived earlier than expected yesterday afternoon. Naturally, I had to do an interview with this deck. I was drawn to it both because of its choice of theme (anything witchy floats my boat) and the bright colours. Before I go on to share my first impressions of the cards below, I'll let today's guest of honour have her say:1. Bicycle Favole Playing Cards and Other Collector’s Decks at Kardwell.com. Bicycle Favole Playing Cards and Other Collector’s Decks at Kardwell.com. NEW-Decameron-Tarot-Deck-Boxed-78-Card-Set-With.jpg (JPEG Image, 218 × 400 pixels) Revelationstarotcarddeckssets.jpg (JPEG Image, 658 × 544 pixels) Tarot the Zodiac , Judaism connnection. Wp-content/images/BirthdayChart.pdf. Card of the Month - Intuitive Explorations of Sacred Circle tarot deck.

Tao Te Ching by Lao Tzu - translated and explained by Stefan Stenudd. Preface My first meeting with the Tao Te Ching was in my late teens. 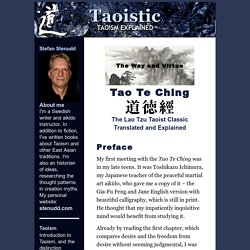 It was Toshikazu Ichimura, my Japanese teacher of the peaceful martial art aikido, who gave me a copy of it – the Gia-Fu Feng and Jane English version with beautiful calligraphy, which is still in print. He thought that my impatiently inquisitive mind would benefit from studying it. Already by reading the first chapter, which compares desire and the freedom from desire without seeming judgmental, I was hooked. That appeals to a teenager. The book remained with me, far beyond my teen years. Tao Te Ching, which is the major source of Taoism, has a clouded origin. He is said to have departed riding on a water buffalo. His text is around five thousand words long, divided into two parts. Although clear about presenting a worldview and arguing for it, the book is written with the elegance and artistry that makes it most appropriate to call it a poem. That's necessary. That's true for any classic. Stefan Senudd February, 2011.

Esoteric Texts & Archives. The Book Of THoTH. Introduction Anna Franklin and graphic designer Paul Mason had spent over 15 years designing the Sacred Circle Deck. Franklin is a Priestess in the British Pagan Tradition and her aim was to create a deck based on the Pagan heritage of Britain and Ireland. Paul Mason combined photographs and traditional drawing techniques using computer imaging to produce this amazing deck. This is Paul MasonÃ¢â‚¬â„¢s aim: "... produce a tarot that had some of the naturalism of photography, but also... magical realism. " The Sacred Circle Deck does not serve only for divination but it also helps personal growth and spiritual development.