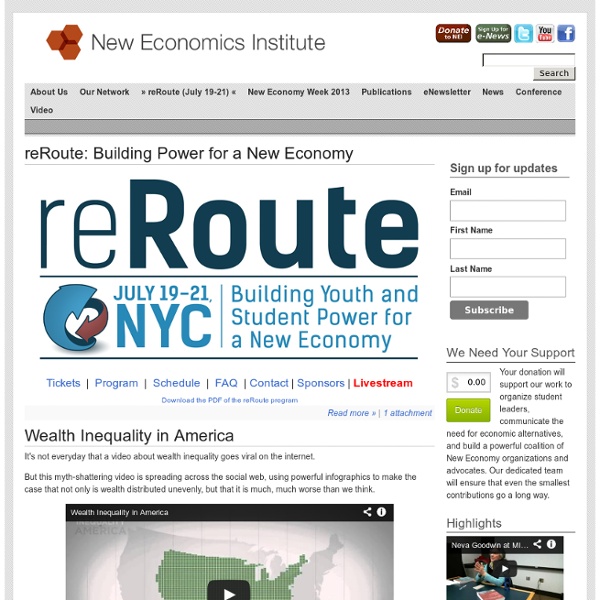 Many exciting things are happening at the New Economy Coalition! We have just hired some fantastic new talent onto our Organizing Team to build on our existing Youth and Student Network, jumpstart our Faith Communities Organizing and launch a brand new Racial and Economic Justice Initiative. And we’re re-launching our Youth and Student grants program! Read to the end for more information about that program and how to apply.

Feeding the 5k Where there’s muck, there’s brassica! Gleaning Network UK is an exciting new initiative to save the thousands of tonnes of fresh fruit and vegetables that are wasted on UK farms every year. Farmers across the country often have no choice but to leave tonnes of their crops unharvested and get ploughed back in the soil. These crops cannot reach the market either because they fail to meet the retail strict cosmetic standards or because of overproduction.

News « Econ4 Fast Company (fastcoexist.com) reports on Econ4: “We’re economists: we want to promote not only the supply of new economics teaching but also student demand for it.” Read the story and accompanying interview here. The Wall Street Journal, reporting on the American Economics Association’s recent decision to require economists to disclose potential conflicts of interest, quotes Econ4′s George DeMartino and Gerald Epstein, leading advocates of uploading ethics into the profession. George DeMartino, a University of Denver professor who headed the panel, has argued for the adoption of an even broader “economists’ oath” that would address questions like the ethics of advising dictators and the responsibility of economists to stand up for the poor.Gerald Epstein, a professor at the University of Massachusetts at Amherst who has previously criticized economists’ lack of disclosure, in an email called the policy “a very big step forward.”

Capitalism Has Failed: 5 Bold Ways to Build a New World May 16, 2012 | Like this article? Join our email list: Paul C. Brunson Six Highly Effective Habits of Six New Age Entrepreneurs » Paul C. Brunson I spend a few hours each week seeking out entrepreneurs. I normally block a time late at night when my wife and son are sleeping and start digging. I hit up every platform possible searching for business people I’ve never heard about and who carry a powerful message. Most of the time, I come across some real wacks (isn’t it fascinating how many people online peddle advice with zero credibility, but I digress). Vegetarian Guides - Festival Calendar Printer-friendly pdf version of this calendar (130KB) There are vegetarian and vegan festivals in many countries. Now you can visit a new town or country, enjoy every meal, make new friends, and have a fantastic time! (last updated 29 April 2014) Great Yorkshire Vegan Festival, Leeds, England, 10 May 2014 Saturday 10.00-18.00 at Queens Hotel, City Square, Leeds LS1 1PJ.

WIR Bank WIR Bank logo The WIR Bank, formerly the Swiss Economic Circle (GER: Wirtschaftsring-Genossenschaft), or WIR, is an independent complementary currency system in Switzerland that serves businesses in hospitality, construction, manufacturing, retail and professional services. WIR issues and manages a private currency, called the WIR Franc, which is used, in combination with Swiss Franc to generate dual-currency transactions. The WIR Franc is an electronic currency reflected in clients' trade accounts and there is no paper money. The use of this currency results in increased sales, cash flow and profits for a qualified participant.

The Crash Course The Crash Course has provided millions of viewers with the context for the massive changes now underway, as economic growth as we've known it is ending due to depleting resources. But it also offers real hope. Those individuals who take informed action today, while we still have time, can lower their exposure to these coming trends -- and even discover a better way of life in the process.

Small is beautiful – an economic idea that has sadly been forgotten EF Schumacher's Small is Beautiful was the first book on politics I ever read; it was the only book about politics I ever saw my father read or heard him talk about. It arrived in our cottage in rural North Yorkshire as a manifesto from a radical countercultural world with which we had no contact. Re-reading its dense mixture of philosophy, environmentalism and economics, I can't think what I could possibly have understood of it at 13, but in a bid to impress my father I ploughed on to the end.

Marjorie Kelly: Divine Right of Capital Berrett-Koehler Publishers Buy on Amazon Find a local bookseller on IndieBound William Greider writes in the Foreword, “Can we imagine an economy in which firms are typically owned in large part by the people who work there? In which corporate boards of directors are required to exercise broad fiduciary obligations to all of the stakeholders in the company — employees and community as well as absentee owners? Solidarity economy The definition of "solidarity economy" consists of activities organized to address and transform exploitation under capitalist economics, and can include diverse phenomena.[1] For some, it refers to a set of strategies and a struggle aimed at the abolition of capitalism and the oppressive social relations that it supports and encourages; for others, it names strategies for "humanizing" the capitalist economy—seeking to supplement capitalist globalization with community-based "social safety nets". The still evolving term "solidarity economy" is an English translation of a concept formally formulated in Lima, Peru in 1997 (economía solidaria), in Quebec in 2001,[2] and in Brazil during the World Social Forum of 2001, and in Portuguese as "economia solidaria".[3] It is also represented by the French "économie solidaire" and similar terms in several other languages. As such it is sometimes translated by other expressions such as "solidarity-based economy". Social and solidarity economy[edit]

The Secret Agents of Capitalism Are All Around Us The young people grouped at the end of the bar resemble Gap models. They are facially attractive, in that asymmetrical sort of way, and they wear the new uniform of the Internet cast-aside who still has money to carouse with: tight dark blue jeans, T-shirts a bit too small and hair slightly greased. It's a Wednesday night at a small bar on Manhattan's Lower East Side. ''I feel so great, so real,'' says a slight young woman with spindly arms and wide eyes.

The Blue Economy The Blue Economy: 10 years - 100 innovations - 100 million jobs is a book by Gunter Pauli. The book expresses the ultimate aim that a Blue Economy business model will shift society from scarcity to abundance "with what we have", by tackling issues that cause environmental and related problems in new ways. The book highlights potential benefits in connecting and combining seemingly disparate environmental problems with open-source scientific solutions based upon physical processes common in the natural world, to create solutions that are both environmentally beneficial and which have financial and wider social benefits. The book suggests that we can alter the way in which we run our industrial processes and tackle resultant environmental problems, refocusing from the use of rare and high-energy cost resources to instead seek solutions based upon simpler and cleaner technologies.