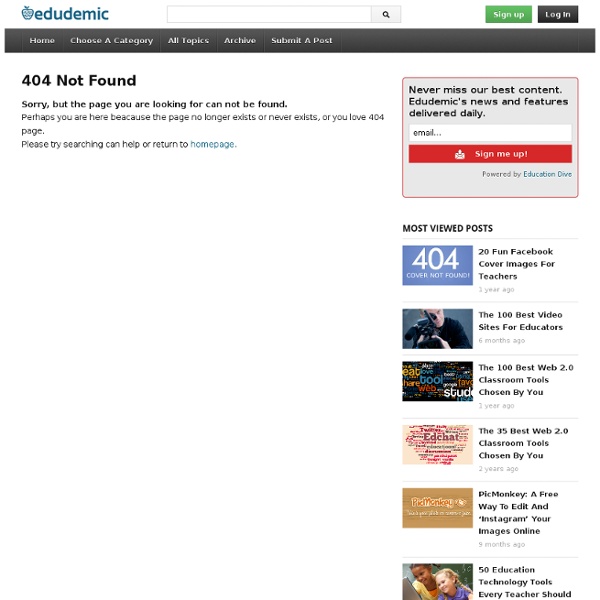 Related:  Parts of school • AT workshop

Blooms and iPad Applications I just got tweeted a nice diagram showing iPad applications against different levels of Bloom’s revised taxonomy. Its a good and well considered diagram and I like it. Some applications there that I haven’t seen yet and I will have to look up. The Complete List of iPad Tips, Tricks, and Tutorials The Apple iPad is an amazing tablet, and to help you get the most out of it, we’ve put together a comprehensive list of every tip, trick, and tutorial for you. Read on for more. Note: This article was originally published earlier this year, but we’ve updated it with a real lot more content since then, so we’re republishing it for you. Apps to Use as Student ePortfolios I have yet to find the perfect Digital Portfolio app that I think I would use exclusively in a Visual Arts class. Some apps can be used as graphic portfolios or as beautiful sketchbooks, others are great at sharing. Not all of the apps available are great at all of these things. I have spent a heap of time trying to find one and would be more than happy for someone to send me the name of one they are using successfully. Having said that the following are apps that I would consider using; Evernote: FREE Evernote is an easy-to-use, free app that helps you remember everything across all of the devices you use.

50 really useful iPad 2 tips and tricks An absolute gem of an article by John Brandon and Graham Barlow from MacLife on 30th March over at TechRadar. This is going to become my iPad manual from here on in. Customised iPads for all Teaching and Learning: Using iPads in the Classroom Updated 01/2014 If I had thirty iPads in my class, what would I do with them? How would I use them to help my students learn better and help me teach better? Perhaps a better question is what would I do with them that I could not do with other tools that are available and cheaper?

The Must-Have App Review Rubric Added by Jeff Dunn on 2011-11-22 So you just downloaded a few educational apps that you think might be useful in your classroom. How do you accurately compare and contrast them? Thanks to a new app review rubric from by eMobilize , it’s easier than ever to understand just how useful an app may be in the classroom. On a related note, the Edudemic Directory features many educational apps and lets you quickly compare them to see how they stack up. 10 Revolutionary iPad Apps to Help Autistic Children Teachers and doctors are using iPads as a tool to reach out to children with Autism or Asperger Syndrome and the results are remarkably great. Autistic children are showing tremendous improvement after playing fun-filled exercises on iPad which is less stressful and more fun for both the teachers and the students. Below is the list of 10 best iPad applications to give Autism a voice. Photo Credit: Kelly Nikolaisen Those who don’t know, Autism is a lifelong disability that affects the way a person communicates and relates to other people and the world around them. Those affected typically display major impairments in three areas: social interaction, communication and behavior (restricted interests and repetitive behaviors). 1 in 160 children have autism in some form, making it twice as common as cystic fibrosis, cerebral palsy, childhood deafness or blindness and ten times more common than childhood leukemia.

8 Free iPad Reading Apps for Young Learners Again the iPad. You might have noticed a surge in posts about iPad apps here in Educational Technology and Mobile Learning. This is not because I favour iPad over other tablets but because of the huge number of emails I got from readers asking for apps that work on the iPad. I personally love both iOS and Android systems and am familiar with both of them. 10 Apps for Learners Who Struggle with Reading and/or Writing Despite the growing use of multimedia in classrooms, schools remain primarily text oriented. This is a major problem for significant numbers of learners who struggle with text. No matter how capable they may be in other respects, these students are not “academically” oriented in the ways that tend to matter most in the classroom. For many, it’s a processing issue. Others have difficulty with the physical mechanics of writing. So, as I’ve explored possibilities with the iPhone and iPad, my most urgent priority has been to discover free and low-cost tools that can be effective in supporting individuals who struggle with text.