Ned Hardy — Curating The Internet Since Cats Took It Over 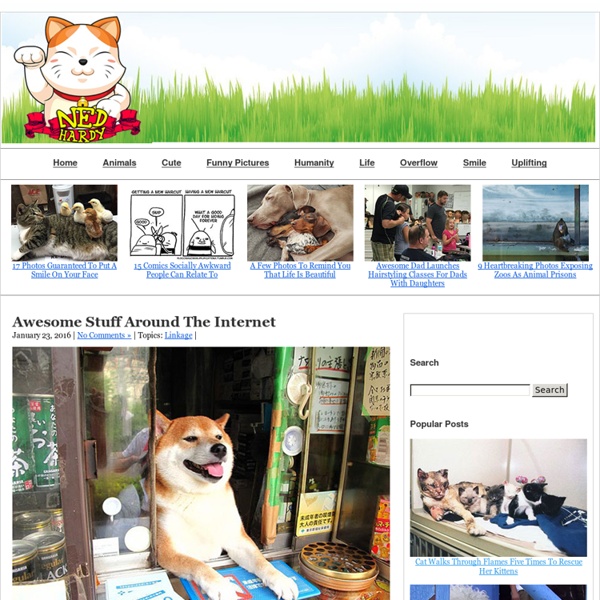 Daniel Nelson - Graphic Designer Misc. Work & Projects A vector watch created in Illustrator A 3D-render of a fictionary beer brand. Created for my friend who has a song called "Zyber Beer" with his band "Beerklunkers". Pitch for a promotional folder (3D) 20 Awesome Products And Design Ideas September 2, 2011 | 48 Comments » | Topics: Design, Pics Hot Stories From Around The Web Other Awesome Stories Sweet Station Zemer Peled Peled was born and raised in a Kibbutz in the northern part of Israel. After completing a BA (Hons) at the Bezalel Academy of Art and Design in Jerusalem she graduated with an MA (Hons) from the Royal College of Art. In recent years her work has been featured nationally and internationally in museums and galleries including Sotheby’s and Saatchi Gallery-London, Eretz Israel Museum-Tel Aviv and the Orangerie du Senate, Paris among others. Zemer Peled’s work examines the beauty and brutality of the natural world. Her sculptural language is formed by her surrounding landscapes and nature, engaging with themes of nature and memories, identity and place.

Gallery of Computation LIVING WORKS binary.ring bit.10001 bone.piles box.fitting box.fitting.img new bubble.chamber buddhabrot city.traveler cubic.attractor deep.lorenz guts new happy.place new henon.phase henon.phase.deep new inter.aggregate new inter.momentary new invader.fractal limb.sand.stroke limb.strat limb.stroke mcp moonlight.soyuz nine.block node.garden new offspring orbitals new paths.i peter.de.jong sand.dollar sand.stroke sand.traveler new self-dividing.line stitches substrate new tree.garden.ii trema.disk trema.spike INFORMATION about the programmer about the medium ORDERING works available production qualities ordering policies CONTACT j.tarbell @ complexification.net The First Zombie Proof House Somehow, ritual drunk-conversation concerning team captains for the apocalypse has become a major part of the lives of 20-somethings. Having been matured in the Grandaddy-crowned masterpiece film (put “A.M. 180” on and forget that you have a job) 28 Days Later and the best-selling Zombie Survival Guide, we’re all a little too ready to deal with the 2012 zombie apocalypse of our dreams. “The Safe House,” designed by KWK Promes, starts to get eerily close to something I could work with, if say 200 bludgeoned members of the undead army came over to eat their way into borrowing some sugar. “The most essential item for our clients was acquiring the feeling of maximum security,” begins the designers’ website in the summary of the structure.

Your Age on Other Worlds Want to melt those years away? Travel to an outer planet! <div class="js-required"><hr> This Page requires a Javascript capable browser <hr></div> Fill in your birthdate below in the space indicated. 10 Laws of Productivity You might think that creatives as diverse as Internet entrepreneur Jack Dorsey, industrial design firm Studio 7.5, and bestselling Japanese novelist Haruki Murakami would have little in common. In fact, the tenets that guide how they – and exceptionally productive creatives across the board – make ideas happen are incredibly similar. Here are 10 laws of productivity we’ve consistently observed among serial idea executors: 1. Break the seal of hesitation.

11 cheap gifts guaranteed to impress science geeks Science comes up with a lot of awesome stuff, and you don't need a Ph.D, a secret lab, or government funding to get your hands on some of the coolest discoveries. We've got a list of 11 mostly affordable gifts that are guaranteed to blow your mind, whether or not you're a science geek. Click on any image to see it enlarged. 1. Aerogel Also known as frozen smoke, Aerogel is the world's lowest density solid, clocking in at 96% air. Wallpaper: Southeastern United States Seen from the International Space Station Southeastern United States Seen from the International Space Station Space Wallpaper About this Image Southeastern USA at night is featured in this space wallpaper photographed by an Expedition 30 crew member on the International Space Station. The brightly lit metropolitan areas of Atlanta, GA (center) and Jacksonville, FL (lower right) appear largest in the image with numerous other urban areas forming an interconnected network of light across the region. A large dark region to the northwest of Jacksonville, FL is the Okefenokee National Wildlife Refuge; likewise the ridges of the Appalachian Mountains form dark swaths to the north of Atlanta, GA and west of Charlotte, NC (center). The faint gold and green line of airglow — caused by ultraviolet radiation exciting the gas molecules in the upper atmosphere — parallels the horizon (or Earth limb).