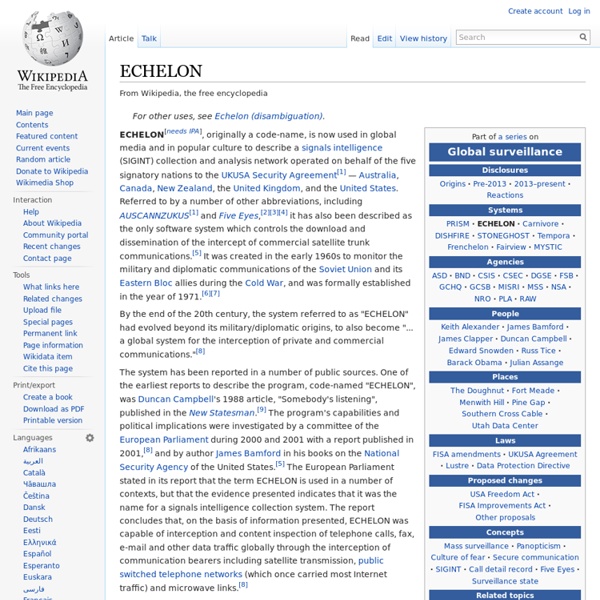 ECHELON[needs IPA], originally a code-name, is now used in global media and in popular culture to describe a signals intelligence (SIGINT) collection and analysis network operated on behalf of the five signatory nations to the UKUSA Security Agreement[1] — Australia, Canada, New Zealand, the United Kingdom, and the United States. Referred to by a number of other abbreviations, including AUSCANNZUKUS[1] and Five Eyes,[2][3][4] it has also been described as the only software system which controls the download and dissemination of the intercept of commercial satellite trunk communications.[5] It was created in the early 1960s to monitor the military and diplomatic communications of the Soviet Union and its Eastern Bloc allies during the Cold War, and was formally established in the year of 1971.[6][7] §Name[edit] Britain's The Guardian newspaper summarized the capabilities of the ECHELON system as follows: §History[edit] §Origins (1960s–1970s)[edit] §Expansion (1980s)[edit] §Organization[edit]

UKUSA Agreement as part of 5 Eyes The United Kingdom – United States of America Agreement (UKUSA, /juːkuːˈsɑː/ ew-koo-SAH)[1][2] is a multilateral agreement for cooperation in signals intelligence between the United Kingdom, the United States, Canada, Australia, and New Zealand. The alliance of intelligence operations is also known as Five Eyes.[3][4][5][6][7] In classification markings this is abbreviated as FVEY or the countries are listed like AUS, CAN, GBR, NZL, USA.[8] Emerging from an informal agreement related to the 1941 Atlantic Charter, the secret treaty was renewed with the passage of the 1943 BRUSA Agreement, before being officially enacted on 5 March 1946 by the United Kingdom and the United States. In the following years, it was extended to encompass Canada, Australia and New Zealand. Other countries, known as "third parties", such as West Germany, the Philippines and several Scandinavian countries also joined the UKUSA community.[9] History[edit] Origins (1940s–1950s)[edit] Investigations (1970-90s)[edit]

History of the Australian Intelligence Community (AIC) - Office of National Assessments Where the AIC began Australia's intelligence effort started in the lead-up to the First World War, when it emphasised counter-espionage. During the Second World War, the first parts of what became today's AIC sigint organisation were formed to support US and Australian forces in the Pacific. The Defence Signals Bureau (now known as the Defence Signals Directorate - DSD), formally came into existence in 1947. Following the Second World War, the sigint focus was on Soviet communications. Concern about our own security led to the establishment of the Australian Security Intelligence Organisation (ASIO) in 1949. The Australian Secret Intelligence Service (ASIS) was formed in the Department of Defence in 1952. The AIC includes two assessment agencies. The newest member of the AIC is the Defence Imagery and Geospatial Organisation (DIGO). Shaping the AIC Over the years the demands on the AIC have changed, and there have been a number of inquiries into various aspects of the community.

Inquiry into Australian Intelligence Agencies - Chapter 7:Resourcing and effectiveness of the agencies Your Location: Home > Contents > Resourcing and effectiveness of the agencies - Defence Signals Directorate Background DSD's Origins and Role DSD Today Accountability DSD's Activities Management of DSD DSD's Resourcing Conclusion Background The Defence Signals Directorate is Australia's signals intelligence agency. Signals intelligence has special intelligence value. DSD also has an important role in advising on and supporting information security practices across government. DSD's Origins and Role DSD's current activities have their origins in the development of Australian military sigint capabilities during World War II. In 1977, DSD assumed its current name, its status as a "directorate" within the Department of Defence reflecting Justice Hope's recommendations that DSD's important national role be given greater recognition. DSD's foreign partnerships, dating back to its wartime origins, have been a central factor in its development. DSD Today Accountability DSD's Activities